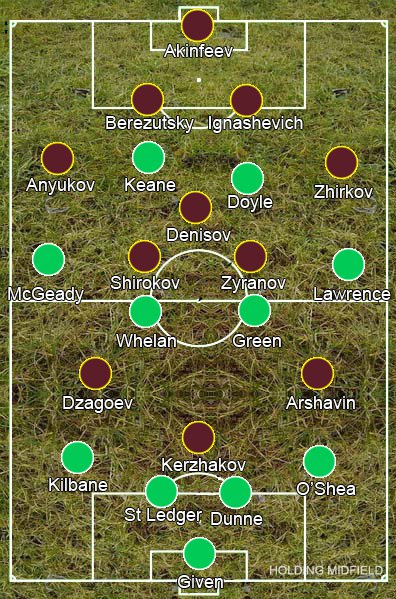 The Republic of Ireland headed into the game thinking they had an excellent chance of putting six points between them and their opponents in their race to qualify for Euro 2012, with Russia facing a number of problems, and yet came away rather embarrassed despite their late comeback attempt.

Russia lined up in a 4-3-3 shape while Ireland, slightly contrary to my diagram, set up in a 4-2-2-2. The game was an entertaining clash of styles: Ireland looking to play very direct balls up to their strikers that contrasted Russia’s passing game, with neither side particularly good at defending against the other’s style.

Ireland started the game the better side; despite their physical styles, Vasiliy Berezutsky and Sergei Ignashevich looked poor in the air, with most of Ireland’s long balls forward landing on a Irish head. They also defended well, sitting deep and keeping space to a minimum, only for Russia to go 1-0 up.

The free-kick was very harsh and Ignashevich was possibly offside, but it shouldn’t mask the poor marking from the Irish players. Ignashevich was able to run easily horizontally behind the Irish defensive line from the back post to the front to get on the end of the cross – this first attempt was blocked, but he was able to flick it across for Aleksandr Kerzhakov to tap in.

From this point on, Russia were on top. Although Ireland continued to sit deep and limit space, Russia were still able to thread balls through – a credit to their passing ability but often, positioned well, all an Irish player needed to do was stick out a leg to intercept the ball, instead they just let it run through.

As you would expect of wide forwards on their wrong foot, Andrey Arshavin and Alan Dzagoev tended to come inside, leaving it to the full-backs to provide width. Yuri Zhirkov got forward more than Aleksandr Anyukov on the right because Kerzhakov would often move to the flank to make more space for the other forwards, but the left-back rarely tried to get in behind the Irish defence. One of the few times one of the full-backs did provide some proper width it resulted in a goal: Dzagoev and Kerzhakov staying inside opened up space for Anyukov to attack, crossing it low for Dzagoev to finish (fig. 1). Aiden McGeady was criticised for not tracking Anyukov, but it appeared that this was the fault of Giovanni Trapattoni, who had instructed his midfield to stay narrow – which, to be fair, had largely worked because of the full-backs’ reluctance to attack the by-line.

As their frequent long balls would suggest, Ireland aren’t as technically proficient as Russia and Dick Advocaat’s side took full advantage of this, pressing intently – frequently resulting in them dispossessing the Irish defensive midfielders just outside the area. The flipside of this was that the Russian defenders had to position themselves high up the pitch, leaving a large space behind them – long balls into this space, along with aerial bombardment from set-pieces, looked like producing Ireland’s best chance of scoring.

With the Irish playing a direct brand of football, it was surprising how narrow McGeady and Liam Lawrence were – you would think they would they would try to stay wide when attacking and cross it in for Robbie Keane and Kevin Doyle, instead as figure 2 shows, they stayed central. As a result, Lawrence was barely involved and McGeady had an awful first half, trying to jink his way through on his stronger right foot and often running into two Russian players. The Glaswegian winger improved in the second half, but appeared to tire quickly – by the 65th minute he was offering neither an attacking option or any defensive cover. Lawrence was substituted for Shane Long and Doyle for Keith Fahey, switching to a 4-2-3-1 with McGeady in the centre and Keane as lone striker. He appeared energised by this change, buzzing dangerously around the opposition box; whether this is something Trapattoni is considering starting with or only an option late on in a game when the opposition tire so McGeady has more space, it must raise questions over where one of Ireland’s most talented, if inconsistent, players’ best position is.

At two goals down, Ireland were forced into pushing higher up the pitch to win back the ball. Of course, this didn’t really work because the Russians are excellent passers and the teams’ respective formations meant they always had an extra man in midfield. Several times, the Russians passed the ball about between the defence and two of the midfielders, drawing Glenn Whelan and Paul Whelan up the pitch before chipping it over for the other midfield play in acres of space. Something similar happened for the third goal: Whelan and Green pushed up, Shirokov picked up the ball between the lines and takes a shot – the deflection off Richard Dunne was fortunate, but, tactically, the goal was anything but lucky.

Either through tiredness or damage limitation, Ireland stopped pressing so highly. This shored up the Irish defence and didn’t really change much offensively – the Irish rarely managed to get back the ball when pressing anyway.

They got back to 3-1 through Robbie Keane getting in behind the Russian defence and winning a penalty, it was a dive but it’s the sort of thing needed for Ireland to get back in the game. Suddenly the comeback was on – a free-kick on the half-way line was hit long, Dunne flicked it down for McGeady to strike, the shaky Igor Akinfeev parried it straight back into the danger area and Long finished. Ireland continued to hoof the ball forward and Russia were less happy to commit lots of men forward with a slender lead until full-time.

Trapattoni could be criticised for the lack of a Plan B, but it’s rare for a national team to be able to create one with such little time to work together – with some more time spent practising defending set-pieces, his Plan A may well have worked.

To sum the match up concisely: Ireland are excellent in the air, clumsy with their feet; Russia are the opposite.