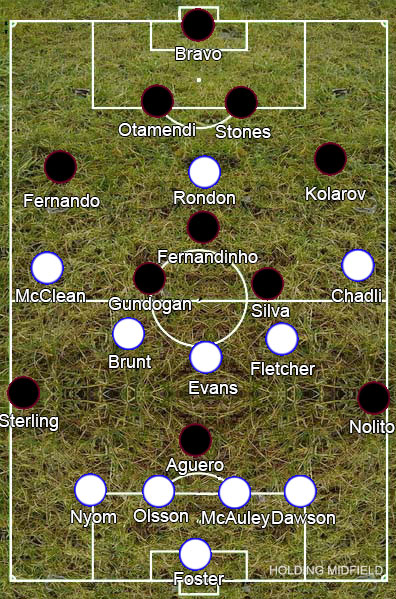 For years we have heard of a mythical wet and windy night in Stoke that would be the true test for Barcelona. European cups and league titles all meant nothing until the world’s best footballers had been kicked a lot on a plough-field. Many thought the fateful day would never come, and they were right: Stoke weren’t ever going to be in a position to challenge Barcelona on a Tuesday and even if they were, they have evolved from the hoof merchants that won them the position of footballing gatekeepers in the first place. We finally have something of an equivalent though. It’s West Brom rather than Stoke and Manchester City rather than Barcelona but the real point was always the clash of ideologies best summed up by the two coaches: Tony Pulis and Pep Guardiola. It was also a Saturday and the weather was milder than the requested storm, but we have to make some kind of compromise.

Neither man goes into this match at their best though. City go into this game on the back of a rough patch of results that made it clear they are not Barcelona, opponents taking advantage of the fact their defenders aren’t as capable at playing out from the back as their Catalan equivalents to cut their attacks out at the source, and while Pulis has West Brom in roughly the lower midtable position you would expect, fans are far less tolerant of his eyesore style than they were just a few years ago when he was at his peak.

The two teams lined up in a similar 4-5-1 shape, but that’s where the similarities end obviously. Man City would look to play patiently out from the back while West Brom would look to hit it long to Salomon Rondon for knockdowns for the wingers, generally giving the ball back to City to start the process over again.

Attacking can fairly be assumed to be the secondary priority for Pulis here. His strategy is built on tough organisation and a game against the likes of Guardiola is where it makes most sense. West Brom generally didn’t look to put much pressure on the City backline, instead keeping tight to their man in midfield and defence to ensure they couldn’t get much time on the ball and force them backwards. Teams have been successful against City in recent weeks by doing the opposite: isolating the defence from the rest of the team by putting pressure on them and forcing them to play in tight spaces when they aren’t as accomplished at it as Barcelona or Bayern Munich. Instead, West Brom gave the defence free rein and tried to isolate the attackers who are much better in those tight spaces.

This created more problems for West Brom. With each player trying to keep tight to their man it meant that each midfielder already had their hands full if a City player managed to worm their way out from their marker, so there was plenty of space to make use of if one was able to get free. Sergio Aguero would be followed by a centre-back if he dropped a little deeper but he was frequently able to pick up the ball in these gaps in midfield.

The opening goal showcases some of these issues. The ball is sent long but City reclaim it, Ilkay Gundogan plays a quick interchange of passes with Raheem Sterling and, with West Brom’s midfield stretched, has a free run at the defence to slide a through ball to Aguero to finish.

There were other problems at play here though. Firstly, West Brom’s midfield looked lethargic and by the time they had realised they were in trouble Gundogan was already about to play in Aguero: with better concentration or more energy they could well have stopped here. Secondly, several West Brom players get caught ahead of the ball due to the way they attack. Early on, Rondon was moving closer to the wings and trying to bring down the long balls for the respective winger but this mostly ended up with a throw-in, allowing City to reorganise and win back the ball. They changed so that Rondon would stay central to win a flick on and the wingers would run in behind hoping to be put one-on-one with the keeper. However this meant that when City won the header it goes straight back into midfield, where the wingers have left their men free as they tried to get in behind the City defence, and their teammates get overrun quickly.

This kind of gameplan largely depends on keeping things even so falling behind this early was pretty much the death knell for West Brom but Aguero’s second ten minutes later would confirm it. Again, no pressure meant Fernandinho could carry the ball forward unopposed but it was sloppiness from West Brom that gifted the goal to City. David Silva overhit a pass that could have easily ended the move yet West Brom failed to get the ball away before a poor touch from Darren Fletcher gave Aguero the ball straight back and neither he or flat-footed Jonny Evans making any attempt to step in and help as Aguero turned to shoot. There were obvious structural issues but they were once again exacerbated by a lack of sharpness from West Brom players.

Two goals down, West Brom now had to try to win back the ball as soon as possible if they were going to get back into the game. This meant they would push up against City’s defence much more and managed to force City into hitting it out of play a few times. They clearly weren’t set up to play like this though and it frequently just meant they were even more stretched and easier to play through. The game had been over as a competition long before Gundogan put the icing on the cake with his brace.

While we can never fully forgive Pulis for bottling it in the 2011-12 Europa League and robbing everyone of the chance to see quite how far his tactics could take Stoke in Europe, hopefully this game can act as some kind of closure.