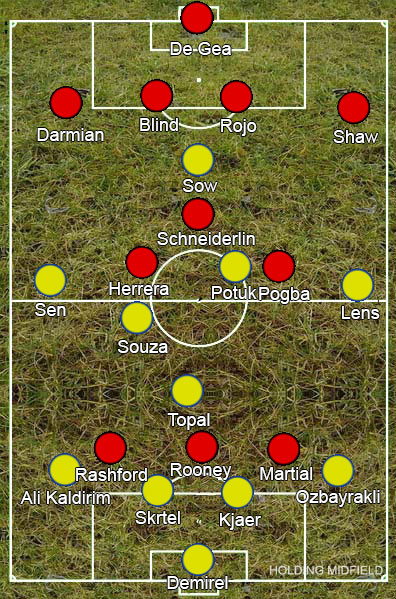 The increased significance of Manchester United’s tie with Fenerbahce, who they had beaten comfortably a fortnight before, had far more immediate reasons though. A thrashing at the hands of his previous club Chelsea and a failure to turn chances into a win at Burnley have done little to assuage Mancunian fears that the Portuguese has lost his way in recent years, already looking a lot like the man who lost hearts and minds in Madrid and London. The Europa League probably won’t be a priority but any result to reverse their current form would be welcomed.

An overhead kick from Moussa Sow 65 seconds in suggested that wouldn’t be the case.

United started in a 4-3-3 formation with Wayne Rooney flanked by Anthony Martial and Marcus Rashford, while Fenerbahce were in an ambiguous 4-5-1 shape – each man looked to keep tight to their opponent so their positioning changed according to United’s but Alper Potuk was generally the highest central midfielder and Mehmet Topal the deepest. For example, if Paul Pogba came deep to get the ball he would be followed closely by Potuk, yet if he pushed on Topal would take over marking duties and Potuk would stay ahead of him, blocking passes from the defence being played into Pogba’s feet.

Sticking tight to their opponents was a very successful defensive approach for Fenerbahce. United’s midfielders never had the time or space to turn and pick out a pass, meaning there was little link between defence and attack. Fenerbahce defenders would follow United’s attackers well into midfield if they dropped back but they rarely looked to exploit this – Martial and Rashford both wanted to come central and run beyond Rooney, while the scouser rarely dropped off the frontline. The tight marking in midfield meant there were gaps there to exploit however United’s deeper players were left trying to pick out a narrow static attack lined up with their backs to goal.

This only really left Luke Shaw and Matteo Darmian as options. Jeremain Lens and Volkan Sen both kept quite wide yet stuck nowhere near as tight to the full-backs as the central midfielders did to their opposite numbers. Nevertheless, despite frequently bombing on, they were rarely used. There were a few moments where one would be completely free having run beyond their winger, only to have to turn around seconds later as the easy pass was ignored and an opportunity wasted.

Things only got worse for United as Pogba limped off injured and was replaced by Zlatan Ibrahimovic, shifting to a 4-2-4. One less player deep obviously made it even harder to get the ball forward but there were now four attackers on the field, none of which suited their role. Ibrahimovic is at his best alone in the centre, where he can either stand up against the centre-backs and try to hold the ball up or drop deeper and try to link play. Rooney limited his space to work in however, and he frequently ended up moving deeper into wide areas where he lacks the pace to be really effective.

There isn’t really much to say about Rooney that hasn’t already been said. With his touch deserting him in recent years, he doesn’t make a great number 10 and with over a decade of playing at the highest level catching up with him, he doesn’t really have the pace to play as a lone striker anymore. He has however found some success when he’s popped up in wide positions, finding little pockets of space to pick out crosses for Ibrahimovic. The issue then becomes the need to support the older pair with pace. This was presumably what Mourinho was trying to do with Rashford and Martial but it clearly didn’t work here as neither man was actually making use of their athletic gifts, standing still with their backs to goal rather than trying to dart behind the backline.

Morgan Schneiderlin was swapped at half-time for Juan Mata, who found it easier to evade his markers and link play, especially as Fenerbahce dropped deeper as the game wore on, but truthfully United never looked like breaking the Turks down.

Although Fenerbahce doubled their lead with a free-kick and nearly scored with some counters later in the game, their attacking priorities were completed a minute in and from there on their focus was on keeping United at bay.

While arguably unfortunate, the result was symptomatic of a team that doesn’t really fit together. Much like how Louis van Gaal was trying to play passing football with players far too slow at moving the ball to make it work, Mourinho’s setting up to balance out his key players but ensuring none of them will reach their best. His insistence on berating his players at every opportunity makes it hard to sympathise though, hitting the low points in record timing.