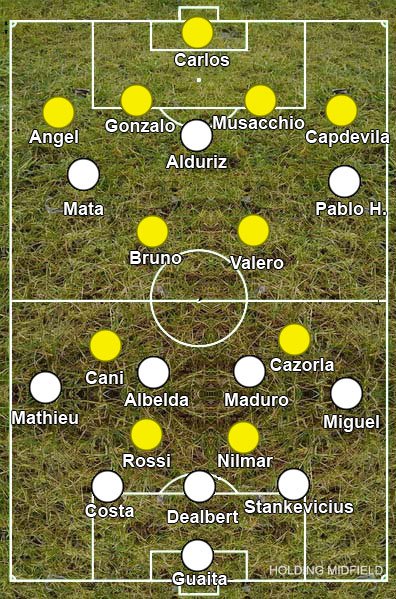 The most exciting tie in the fifth round of the Copa Del Rey didn’t turn out to be quite as entertaining as some may have hoped, but it remained an interesting tactical battle.

Villarreal lined up in their usual 4-2-2-2, which has been outlined in a highly recommended analysis by Tim Hill.

Valencia manager Unai Emery lived up to his tinkerman reputation, switching to a 3-4-3 shape that he used to some success against Villarreal last month.

The three man defence has gone out of fashion in recent years due to the similar downturn in the use of two striker formations. The reasoning’s fairly simple: against one striker there are two spare men, one which could be used elsewhere, and against a front three the defence gets too stretched with no spare men.

Villarreal’s success is based around that front four. Both Guisseppe Rossi and Nilmar are versatile enough to play as prima or seconda puntas or pull wide; when they do pull wide, one of the interiores moves into the vacated space while Angel and Joan Capdevila provide width.

By having an extra man at the back, the space made by the strikers drifting wide is filled. Also, playing with wingers makes the full-backs reluctant to attack, meaning there is little room in the centre and little width. As you would expect, Villarreal struggled to create anything.

Initially both teams were pressing to little effect, mostly because of their technical quality, until Villarreal dropped off to defend more passively. Originally there had been several chances from getting in behind the defence for both teams, which were wasted by the attackers’ troubles with the offside law.

Rossi and Nilmar stood by the defensive midfielders, the interiores marked the wing-backs and so on, leaving the centre-backs free – all well and good when they’re poor on the ball, but not when they’re capable of stepping up, as Ricardo Costa showed perfectly by moving forward into the opposition half to dink the ball over for Jeremy Mathieu to cross. Eventually, one of the strikers would move towards one of the spread out centre-backs while Borja Valero would move to cover him.

Although the pressing hadn’t worked well for either team at the start, all dropping off did was isolate Villarreal’s front four from the rest of their team further. At the risk of sounding mind-numbingly obvious, defending deeper just meant they were further from the goal and closer to their own. With Valencia still pressing, Villarreal were under more pressure to get rid of the ball quickly as losing it deeper would give Valencia the ball much closer to goal, making it easier for them to score. Instead of their usual passing game, Villarreal’s main way of getting it to the strikers were long punts upfield which Nilmar and Rossi aren’t really suited to.

The situation was made worse by young goalkeeper Juan Carlos, who looked nervy throughout. His kicking was awful, leading to two excellent chances for Valencia, and he continually flapped at crosses – not great when playing a deep defensive line, since you are going to be defending a lot of them. Valencia took advantage of this by continually putting a man near him on corners, resulting in plenty of pan-handed attempts at coming for crosses.

The idea was presumably to shut up shop and wait for the return leg, which doesn’t make a huge amount of sense since they were on equal footing at the start of the game and, as the away side, goals were better for Villarreal.

A lot of credit must go to Valencia for utilising their system so well. Pablo Hernandez was doing brilliantly against Capdevila on the Valencia right and Juan Manuel Mata also did well on the left. They were also doing a good job defensively – marking the defensive midfielders before rushing out to meet the full-backs if it was passed to them, while covered in the centre by Hedwiges Maduro. Both wingers were tucking in to make space for the advancing Jeremy Mathieu and Miguel fromwing-back. Mathieu was getting most of the plaudits for getting into those high wide positions, often being the highest player other than Aritz Aduriz, but Miguel was generally the more effective player, crossing more accurately from deeper positions. He was helped by Santi Cazorla’s tendency to unnecessarily come inside and help the holding midfielders, giving the Portuguese more time and space.

For the start of the second half Mata and Pablo switched over, now playing on their wrong feet (although both are good with either foot). This was presumably to narrow the front three even more, opening space for the wing-backs to attack, but was a bit pointless since now they just ran into Bruno and Valero in the middle (Valencia’s attacks always seemed to collapse in central positions). They had looked a lot better before half-time, isolating the full-backs and doubling up with Miguel and Mathieu. The wingers switched back onto their natural sides when Joaquin came on for Pablo, seemingly because providing width is Joaquin’s more natural game. Pablo was annoyed at coming off and for good reason: he had had the better game of the two despite Mata probably being the better player.

Villarreal also switched around at half-time, bringing on Marcos Senna for Cani, with Valero moving into the vacated right interiore spot, most likely used as a better defender against the advancing Mathieu.

They also pressed for a minute or so after half-time, but immediately reverted to their deep defending.

On the 70 minute mark, Juan Carlos Garrido made the same change that had got Villarreal back into the game last month, bringing on a striker, Jozy Altidore, for the injured Senna, changing to a 4-3-3.

This worked before by occupying that free man who had previously stopped the interiore taking advantage of the space in the centre. It didn’t work today because of the lack of support provided by the rest of Villarreal’s players thanks to their deep line.

Unai Emery appears to have come across a way of stopping Villarreal’s Plan A and was quite rightly happy with the result: “Villarreal is a great team who work very hard, but we were solid in defence, and the match went in our favour. We tried to press hard, tackle and steal the ball back on every occasion. We wanted to play a good game because we wanted to win. Although looking back, we should have converted more chances. The side made Villarreal suffer for long periods.”

However, Villarreal have come up with a functional Plan B and it must be said they weren’t really attempting to win the game. Valencia can be expected to be put under much more pressure in the return leg, so they must be regretting not getting a goal from their domination. The interest at El Madrigal in January will be how Villarreal line up; will Garrido stick to the 4-2-2-2 perfected by Manuel Pellegrini knowing Emery can stop it, or switch to the 4-3-3 that’s worked against him?