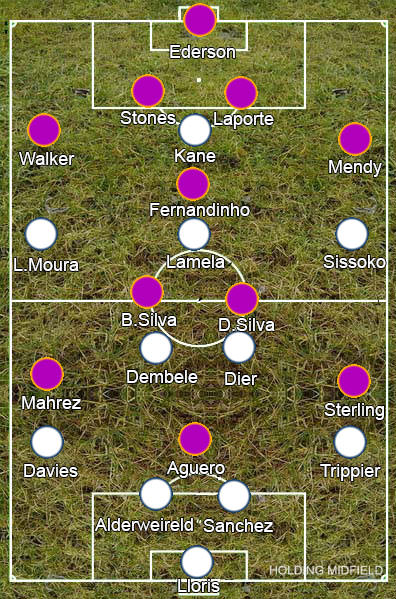 A clash between two teams getting great results this season, however, while Manchester City are playing some of the best football on the planet, Tottenham Hotspur seem to be struggling to keep up, with off-field issues limiting their progression on the pitch.

Mauricio Pochettino set up his team in a 4-2-3-1 formation, whereas Pep Guardiola opted for his usual 4-3-3.

A goal came so early in the match that the game hadn’t really settled into a pattern yet. Keiran Trippier messed up a header from a long ball, allowing Raheem Sterling to skip in behind and set up Riyad Mahrez to finish. It was a simple mistake punished by excellent players, but the gap between the two teams was exposed mid-way through the half when Spurs were gifted the same opportunity. Benjamin Mendy missed a touch that allowed Moussa Sissoko to run in behind him, but his pull-back to Erik Lamela was easily cut out by Fernandinho.

A second opportunity came ten minutes later when Aymeric Laporte missed a header, allowing Lamela to play in Harry Kane, whose heavy touch was pounced upon by Ederson sweeping up behind. Spurs and City are on similar levels but City possess just that touch more quality to punish their opponent’s mistakes and recover from their own.

That early goal undoubtedly coloured the rest of the game. In the opening minutes, Spurs had very clearly defended in a 4-2-3-1 shape with Lamela sticking close to Fernandinho and Kane closing down the centre-backs while blocking the pass into the Brazilian. After City went ahead, Spurs shifted to a 4-4-2 shape in defence – both Kane and Lamela would press City’s centre-backs while trying to block the pass into Fernandinho and ensure he wasn’t left free.

This was rarely successful as City are so good at playing out from the back. They would switch between several patterns: usually a 2-3 (the centre-backs on the corners of the penalty box with the full-backs hugging the touchline and Fernandinho central ahead of them) or 3-2 shape (either Kyle Walker tucking in or Fernandinho dropping back to form a back three with Mendy tucking in alongside Fernandinho or Walker centrally ahead of them) in the build-up but sometimes also a 3-3 shape (they would once again form a back three but Mendy would hug the touchline rather than tuck in and Mahrez would drop back to offer an option on the right flank).

What pattern they used and who took up what position changed all the time, but the end result was always the same: Lamela and Kane were outnumbered so City could easily play out.

From there it wasn’t plain sailing though. Although City could easily progress into Spurs’ half, the home side were well-organised behind them. Sometimes Eric Dier or Mousa Dembele would be drawn up the pitch to help the frontmen’s pressing but Spurs remained compact defensively. City managed to carve out chances but Spurs leaving few gaps meant they weren’t gifted them – they had to shift Spurs about with their intelligent passing and movement.

Although defending well, Spurs struggled to create chances of their own. City’s pressing made it difficult for them to play out in the early stages, with the ball usually ending up at the feet of Hugo Lloris to kick long towards Lamela. The skinny Argentine isn’t exactly the most obvious candidate to be challenging in aerial duels but he was able to run and put pressure on the defender, whereas Kane doesn’t look fit – frequently sturggling to break into a sprint.

Spurs got more of a footing as the half went on, with most of their chances coming from counter-attacks in wide areas. They would win turnovers in midfield then break down the flanks before City could get their defence organised.

Counter-attacking was presumably Tottenham’s main strategy for the game but the early goal threw a spanner in the works. Already leading, City didn’t now have to attack, they could simply keep the ball run down the clock and still come away with three points, while Spurs couldn’t just sit back and wait for City to give the ball away so they could break forward – Tottenham had to go looking for it so they could get an equaliser.

For the second half, Spurs began to press much higher. This meant City were able to pass through them easier but it also allowed them to win the ball back higher and quicker and ensured Kane and Lamela had lots of support. With more attackers joining the attack, there was less pressure on Kane to run and he was better involved, frequently dropping off the front to pick up the ball and quickly switch play out to Trippier on the right flank.

Pochettino made several attacking changes. On came Harry Winks for Dier, helping Spurs play out from the back, then Dele Alli for Dembele, with Sissoko dropping back alongside Winks in the double pivot but still bombing forward to add a man to the attack, before finally Lucas Moura made way for Christian Eriksen to add some more creativity.

Guardiola responded with defensive changes. Kevin De Bruyne came on for Sergio Aguero, City going without a striker to shore up the centre, then Vincent Kompany for David Silva with John Stones moving into midfield, and ending with Gabriel Jesus for Mahrez to run down the clock. Enough to hold off Spurs.

It was an entertaining and high quality game but the early goal meant there was little real tactical interest to the proceedings, having presumably ruined Pochettino’s plans before they really started. Nevertheless it was a good example of how, while the gap may not be large, City are on a level above Tottenham.