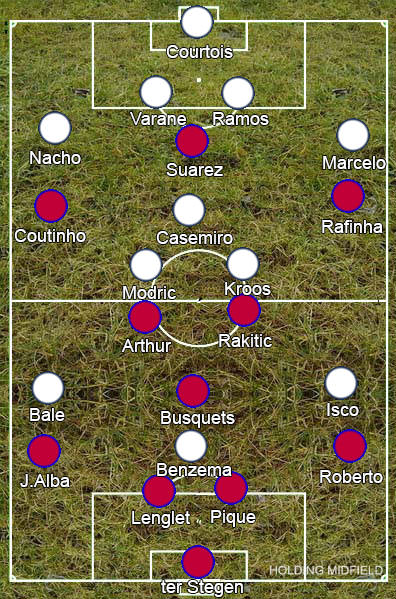 The first Clasico since 2007 without Lionel Messi or Cristiano Ronaldo. Neither side have set the world alight this season, but Barcelona are in better form with Real Madrid already enduring three losses and two draws.

Julen Lopetegui set up his team in a 4-3-3 formation, and Ernesto Valverde went for the same, although Barcelona switched to a 4-4-2 when defending with Arthur Melo pushing up alongside Luis Suarez to press.

Real Madrid defended with little pressure, dropping off into a 4-5-1 shape and allowing Barcelona to have the ball. This did little to stop Barca moving forward: both Rafinha and Philippe Coutinho would drift into the middle and Suarez would drop off, ensuring Barcelona outnumbered Real in the centre, while Jordi Alba and Sergi Roberto would bomb down the wings to offer a wide option and stretch the away side.

Madrid weren’t exactly helping themselves either. Few of the midfielders are natural defenders and so Barcelona could easily evade their marking – Isco and Gareth Bale were rarely aware of the full-backs making runs off the back of them and Luka Modric could be drawn up the pitch, opening up space for a Barca player to wander into behind him, while Barca’s players are good enough to dribble past most of their opposite numbers. Real Madrid’s midfield not keeping compact combined with Barcelona packing this area with players meant that the man on the ball usually had plenty of passing options and no pressure meant he had lots of time to pick out a teammate.

Despite putting little pressure on the ball, Madrid also played with quite a high line, which meant that Barcelona could simply hit a ball in behind them if they wanted.

Unsurprisingly, it didn’t take Barcelona long to open the scoring.

Real Madrid also offered little in attack. Them dropping off to defend meant that only Karim Benzema was left high up the pitch and, while they did regularly send long balls down the left flank for him to run onto, if he did manage to hold up the ball he would still have to wait for his teammates to come up the pitch in support, giving Barcelona’s players the time to get back and cover.

After going behind, Madrid began to press from the front. With Real’s midfield stretched further, Barca still found it easy to work the ball forward – resulting in a second goal from a penalty part way through the half – but it at least forced Barca into making quicker decisions and meant Isco and Bale were positioned higher up the pitch, giving Benzema more support when they won the ball.

Lopetegui rearranged his side for the second half, bringing on Lucas Vazquez for Raphael Varane. Casemiro dropped into a back three as he did against Sevilla, Marcelo and Vazquez pushed forward as wing-backs while Isco floated around as a number ten in front of Modric and Toni Kroos and off of Bale and Benzema in a 3-4-1-2.

They could now press higher – Bale and Benzema would mark the centre-backs, Isco on Sergio Busquets, the wing-backs on Barca’s full-backs, Modric and Kroos on Arthur and Ivan Rakitic, and the centre-backs on the three forwards – making it harder for Barca to play out which meant Real were often winning the ball in their opponent’s half.

The attack was also much better supported. Bale’s presence in the centre meant Benzema could continue to drift off to the left but had someone to combine with to work the ball back inside, while Marcelo and Vazquez would get high and wide to stretch Barca’s backline and Isco was much more involved.

Just minutes into the half, Real pulled a goal back.

For the opening 25 minutes of the second half, a Real Madrid comeback looked likely. Barcelona were struggling to play out from the back, while Madrid’s back three made it easier for them and they switched their attacks from flank to flank in seconds, leaving Barca’s defence stretched. They weren’t really creating good quality chances though, mainly relying on crosses. If they still had Ronaldo, one of these crosses would have likely have ended up in the back of the net, but they don’t and Barca were able to scramble them away.

Although Real had now managed to put Barca on the back foot, there was a clear weakness to their defending: they had no cover at the back. This had largely gone unnoticed until just after Ousmane Dembele’s introduction for Coutinho. A turnover in midfield saw the Frenchman pick up the ball with space to run into and Barcelona quickly got men forward to outnumber Madrid’s defence four against three, with Suarez finishing.

They were exposed again minutes later. Sergio Ramos tried to control a long ball but his touch fell to Roberto, who played in Suarez to complete his hattrick. Then not long after Dembele wrong-footed Nacho so he could cross for substitute Arturo Vidal to finish.

Barcelona had barely had a look in during the second half, yet all of a sudden they were constantly able to overload Madrid’s backline with counter-attacks. It’s tempting to suggest that it was Madrid tiring that broke down their press, but most of these attacks seemed to come from them simply losing turnovers in midfield, giving Barcelona the opportunity to exploit the exposed backline that they had previously struggled to get close to.

Realising they had no hope of getting back into the match, Madrid didn’t commit as much going forward, allowing the game to fizzle out to a resounding Barcelona victory.