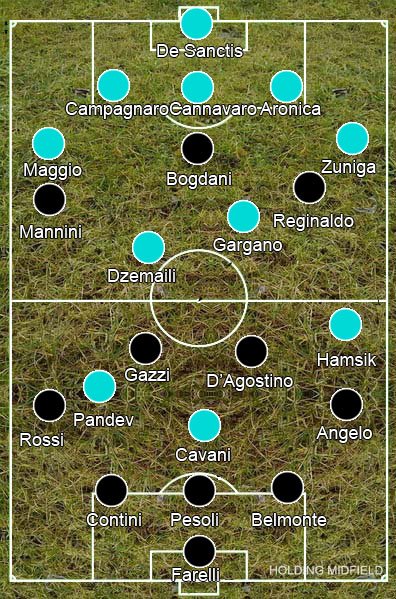 Although Napoli have disappointed somewhat this season, it wasn’t unfair to suggest they drew a long straw when they were lined up against relegation battlers Siena in their first ever Coppa Italia semi-final while Juventus and Milan locked horns in the other tie. However, clearly the advantage still wasn’t enough, with Giuseppe Sannino’s men emerging with a narrow lead for the return leg at the Stadio San Paolo.

The two sides lined up in broadly the same formation: Napoli in their usual 3-4-3 and Siena opting to match them. Just as Marek Hamsik played deeper down the Napoli left than Goran Pandev on the right, former Napoli man Daniele Mannini played deeper than Ferreira Reginaldo for Siena – although about 15 minutes into the game they switched sides, putting Mannini against former Siena player Juan Camilo Zuniga. Although of course there were other personnel-specific weaknesses, this meant that the two sides had to deal with the same issues shape-wise.

Siena would drop back very deep when Napoli had the ball, but would press if the defenders attempted to move forward with the ball. This meant that when Napoli had the ball deep, there were often six players not really offering anything offensively – the three centre-backs could pass the ball the ball forward to Walter Gargano or the wing-backs but wouldn’t make any ground as they hadn’t taken any Siena players out of the game. This meant they would have to move forward to get somewhere, to which Erjon Bogdani and Reginaldo would respond by pressing the Napoli players, quickening the tempo more than they wanted to and often resulting in a long ball forward rather than more measured passing.

Siena’s success seemed to be in forcing Napoli into playing at a quicker tempo than they wanted to – they found a lot of joy through livewire Reginaldo’s running and Angelo provided some dynamism down the right, while long hoofs up to Bogdani proved a constant threat, and Gaetano D’Agostino did an excellent job of finding the space to link play. The goal aside, Napoli probably had the better chances of the first half, but they most came from a sloppy pass in a dangerous from Siena rather than Napoli managing to create anything themselves, but their major problem was the defence: they constantly mistimed their challenges and generally made mistakes. Five minutes in, Bogdani flicked on an awful header but then manages to run onto the ball after the Napoli defence gave up chasing it to leave it for Morgan De Sanctis. The same thing happened for the opening goal: Bogdani flicked on the ball, the Napoli defence stopped chasing and Reginaldo picked it up, but this time De Sanctis wasn’t quick enough.

To get back into the game, Napoli made two changes. The first was to quicken their play – Siena had been outpacing them all night, so they had to quicken their tempo to match them. The second was to switch to a 4-3-3 – Christian Maggio pushed forward further to become more obviously a midfielder, while Hugo Campagnaro shifted across to right-back until Ezequiel Lavezzi replaced Salvatore Aronica to put everyone in their more natural roles. The reason for the second change is fairly obvious: to give more support in attack, but it also had the bonus of taking away some of the Napoli defence’s insurance, forcing them to wake up, although the lack of a third centre-back seemed to backfire somewhat for Siena’s second goal, with no extra man to stop D’Agostino ghosting into the box to finish.

With a fairly secure lead, Siena dropped deeper and pretty much gave up attacking, with all eleven players usually within the 30 yards of their goal. This mostly worked – Siena shutting down all the available space, althoughNapoli would get some joy getting in behind from wide areas.

A silly mistake by Emanule Pesoli gave Napoli a lifeline heading into the second leg and adds some interest: will Sannino carry on with the ultra-defensive tactic he used for the last half hour of this match or look to outplay Napoli again? Regardless, the great side that Walter Mazzarri, and Roberto Donadoni before him, has been crafting is looking increasingly stale and its difficult to justify his claims that they are only the 7th best squad in Italy.