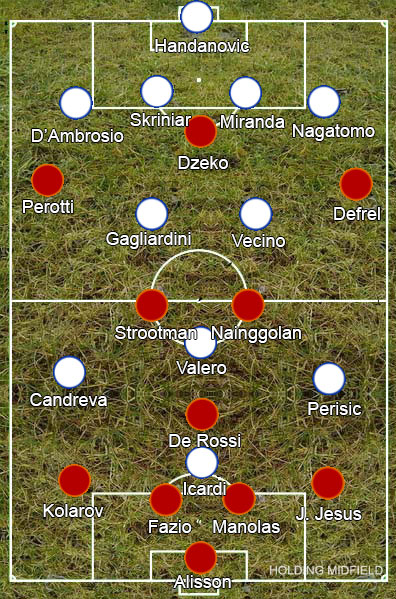 They say never to go back and Luciano Spalletti may well be testament to this. Nearly a decade ago the Tuscan left Roma having run a dominant Internazionale close to the wire using a revolutionary false nine tactic: trequartista Francesco Totti starting up front but dropping off between the lines, leaving defenders perplexed and Totti with the European Golden Shoe. After a middling albeit successful few years at Zenit St Petersburg, Spalletti returned to the Italian capital. He played a more direct style this time around and amassed an impressive 87 points, finishing behind an equally dominant Juventus, but Totti was nearing the end of his career and featured mainly as a substitute. A public spat over a lack of playing time for Roma’s talisman left the coach very unpopular with fans and he parted ways with the club for a second time despite Totti’s retirement. Now he returns for a third time, although in charge of an Inter side far less talented than the one that foiled him in 2008.

Spalletti set up his team in a 4-2-3-1, new signing Borja Valero starting behind Mauro Icardi, while his replacement Eusebio Di Francesco lined Roma up in a 4-3-3.

Neither side started the match well. Roma were the more forward-thinking team, primarily looking to attack down the wings, but Gregoire Defrel and Diego Perotti, even with Aleksandar Kolarov overlapping, weren’t able to trouble the full backs, who were well-protected by Roberto Gagliardini and Mathias Vecino. They also tried to press high up the pitch, with Kevin Strootman often following the ball deep into Inter territory up alongside Edin Dzeko, however this left them stretched vertically and didn’t really phase Inter’s centre-backs, who could often just bounce the ball off the full-backs to reach the holding midfielders.

Inter’s attacking plan was mainly based around trying to play it wide quickly to attack the full-backs one against one as Roma’s stretched midfield gave them far less cover than Inter’s double pivot. They lacked a real link between defence and attack to get Antonio Candreva and Ivan Perisic moving though, as Valero was often dropping deeper to get touches on the ball rather than waiting for it between the lines.

Roma took the lead through Dzeko, not from any established pattern of play but a reward for their more attacking ambitions nonetheless. Inter had been competent yet hadn’t got close to threatening Roma, so Spalletti made a couple of changes, bringing on Joao Mario for Gagliardini at half-time, Valero moving back into the double pivot, and Yuto Nagatomo coming off shortly into the half for Dalbert Henrique. This initially gave Roma more control due to Inter opening themselves up a bit, however the nerazzurri soon gained the upper hand: Joao Mario stayed between the lines to provide that needed link to the forwards, Valero had a better passing range from the base of the midfield and Ivan Perisic drifting inside was more effective with Dalbert supporting.

They equalised with a goal that had more to do with Icardi’s superb finishing ability and the acres of space in Roma’s midfield than their changes but took the lead with another Icardi finish – Joao Mario picking up the ball between the lines before quickly turning and spraying the ball out to Perisic, who isolated Juan Jesus and crossed for the Argentinian.

Now needing another goal, Di Francesco swapped captain Daniele De Rossi for attacker Cengiz Under. This opened up the midfield further though and soon after Joao Mario muscled Radja Nainggolan off the ball, evaded Strootman’s challenge and played it out to Perisic. He made short work of Juan Jesus again to cross for Vecino’s tap-in, sealing the win for Inter.

Despite looking solid defensively Inter struggled to get the balance between defence and attack right in the first half, although a few simple changes appeared to correct this for the second, which is a good sign moving forward. Roma on the other hand attacked admirably however were nowhere near compact enough to continue in this manner – they may be able to overpower weaker teams but better teams will slice straight through them, especially in a league like Serie A.