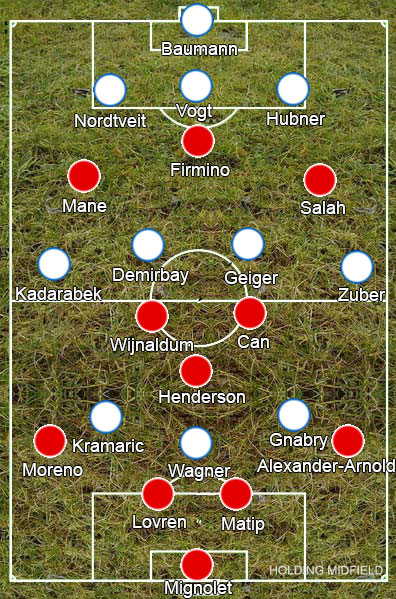 A questionable but not exactly negative start to the season has seen the murmurs of discontent around Liverpool grow louder. A late draw against Watford and a scraped win over Crystal Palace looked too much like the failures Liverpool supporters had seen for years not to elicit groans despite the four points, yet a solid performance away to Hoffenheim put one foot in Europe’s premier club competition, even if the late conceded goal had eyes rolling.

With Philippe Coutinho still out with a case of transfer fever, Jurgen Klopp sent out the same side that beat Hoffenheim in Germany, while Julian Nagelsmann made two changes, swapping Ermin Bikakcic and Lukas Rupp for Havard Nordtveit and Dennis Geiger in their 3-4-3.

One of the first things to say here is that Hoffenheim’s shape didn’t line up well against Liverpool’s at all. Sadio Mane and Mohamed Salah looked to play narrow but on the outside of the centre-backs, putting them between the wing-backs and central defenders so that neither quite knew who was meant to be picking them up. Meanwhile Emre Can, Georginio Wijnaldum and Alberto Moreno were all powering forward at every opportunity, while Roberto Firmino was dropping off into the midfield forcing a centre-back to follow him. They were essentially overloading Hoffenheim’s back five with six players, many of whom were making hard-to-track runs from deep, all while the positioning of Liverpool’s front three was stretching them to make it difficult to cover one another.

Liverpool used this trick in the early stages of their build-up too, forming a makeshift back three as Trent Alexander-Arnold held back, Dejan Lovren pulled wider and Moreno pushed on. With one of the forwards having to chase down Simon Mignolet, Liverpool had four against three, while Jordan Henderson would also come very deep to get the ball. Kerem Demirbay often followed him yet didn’t get close enough, seemingly uncomfortable with getting caught too high, which left him unable to stop Henderson turning and fizzing a through ball straight up the pitch but also unable to help Geiger from defending the midfield against Can, Wijnaldum and the forward trio dropping off. The high pressing also meant that Hoffenheim’s backline was having to step high up the pitch – suicidal against the pace of Liverpool.

Liverpool didn’t really have any of these problems in their own pressing. The front three would push up against the centre-backs while the midfield spread across the Hoffenheim four. The centre-backs were all covered, the centre-midfielders would be met with people closing in on them on all sides, and the wing-backs would be trapped on the flanks with the Liverpool winger dropping deeper on the opposite side to ensure a cross-field ball couldn’t be attempted. Henderson having to step up into the midfield line to ensure they weren’t stretched horizontally did mean that it was possible for Hoffenheim to find space if Andrej Kramaric dropped between the lines or Demirbay could get on the ball, and the runs of Pavel Kadarabek from deep were difficult for Moreno to track, however they were mostly unable to work the ball through the pitch, resorting to long aerial balls down the line which rarely troubled.

Able to slide passes straight through the middle, lay off the ball and pass onto an advancing player running beyond Hoffenheim’s defence, Liverpool raced to a three goal lead in 20 minutes. Nagelsmann switched to a 4-2-3-1, removing Nordtveit for Mark Uth, and got a goal back pouncing on a mistake by Lovren minutes later. The German side now had a clearer idea for who each player should pick up: the back four picked up Firmino, Mane and Salah, Demirbay could stay deeper with Geiger in midfield and the extra forward made it easier to stop Liverpool playing it out.

The game had gone long before though. Hoffenheim’s need to get the ball back meant they had to keep pressing, pushing their defensive line up so that Liverpool could still run in behind them, and they tired soon into the second half. Henderson jumped on a mistake to play in Firmino for a fourth and substitute Joe Gomez failed to get close enough to stop a cross for another Hoffenheim consolation.

This game perfectly encapsulated the exciting direct football that Liverpool are capable of when given the space, with four deep players supplying six attackers. Their main problem is of course that most teams won’t give them that space and Hoffenheim must be kicking themselves that they made it so easy for the Reds.