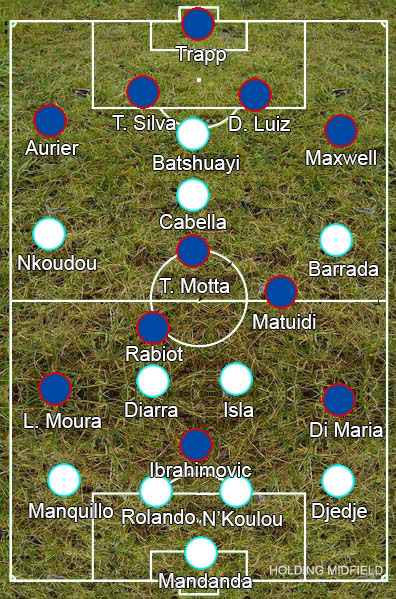 Is French football in bad health or is it as good as health as its ever been? On one hand, Paris Saint-Germain are so far ahead in the league that they will probably wrap it up in the coming weeks and with Dmitry Rybolovlev’s expensive divorce all but ending his interest in Monaco, no one has any real chance of challenging them anymore. On the other, France has never been a particularly strong footballing nation – their national team has been quite successful, but its clubs have just one European Cup between them due to Marseille’s win in 1993, although even that was sullied by match-fixing. They have obviously lagged behind Spain, England, Italy and Germany – and still do – but they have also been historically weaker than the Dutch and Portuguese leagues. Would you expect to see Zlatan Ibrahimovic, Angel di Maria or Marco Verratti turning out in the Eredivisie or Primeira Liga now they are stars?

Whatever PSG’s relative success means for French football, it doesn’t do anything for Le Classique. Marcelo Bielsa seemed the perfect fit for a team that couldn’t hope to match the riches of PSG on their terms. The less flexible theorist managers like Bielsa, Zdenek Zeman or Roger Schmidt may not be suited to the biggest clubs as trying to shoehorn stars into their very specific gameplans is likely only to hamper and annoy. However for those without the resources to compete like Marseille, an unusual gameplan could maximise their potential. Unfortunately, Bielsa left after just one game this season and his replacement Michel has struggled with a squad that had a high turnover of players in the summer, leaving them floundering in midtable.

Laurent Blanc set up in a 4-3-3, making six changes from their previous side, while Michel chose a 4-2-3-1 with Remy Cabella behind Michy Batshuayi.

Before any patterns of play could be established, PSG had already taken the lead. Just two minutes in, Brice Dja Djedje got too tight to Maxwell so Blaise Matuidi dinked it over the top of him for the Brazilian to run in behind and square for Ibrahimovic. It soon emerged that this was PSG’s pattern of play, they just happened to have scored from their first instance of it. The Parisians were specifically targeting Marseille’s right side: Maxwell would push very high and Matuidi was pulling out close to the touchline, ensuring PSG outnumbered Marseille in this channel. Lucas Moura and Di Maria frequently switched flanks but it was the Argentinian that was more influential on the left, constantly looking to dart in behind the square Njedje so PSG could test Marseille’s offside trap with long balls.

Despite their strong start, PSG didn’t look in full control of the game. Marseille seemed much more combative and the capital club were looking sloppy in midfield. Adrien Rabiot seemed to be struggling with the occasion – he was either positioned too deep or he was bursting forward to support the attack at inappropriate times, leaving his teammates exposed defensively. Thiago Motta was far from his best as well, giving the ball away cheaply and allowing Cabella past him too easily for Marseille’s equaliser. Nevertheless, although Motta’s challenge was weak, he can’t be solely to blame when Cabella had so much space and time to shoot: 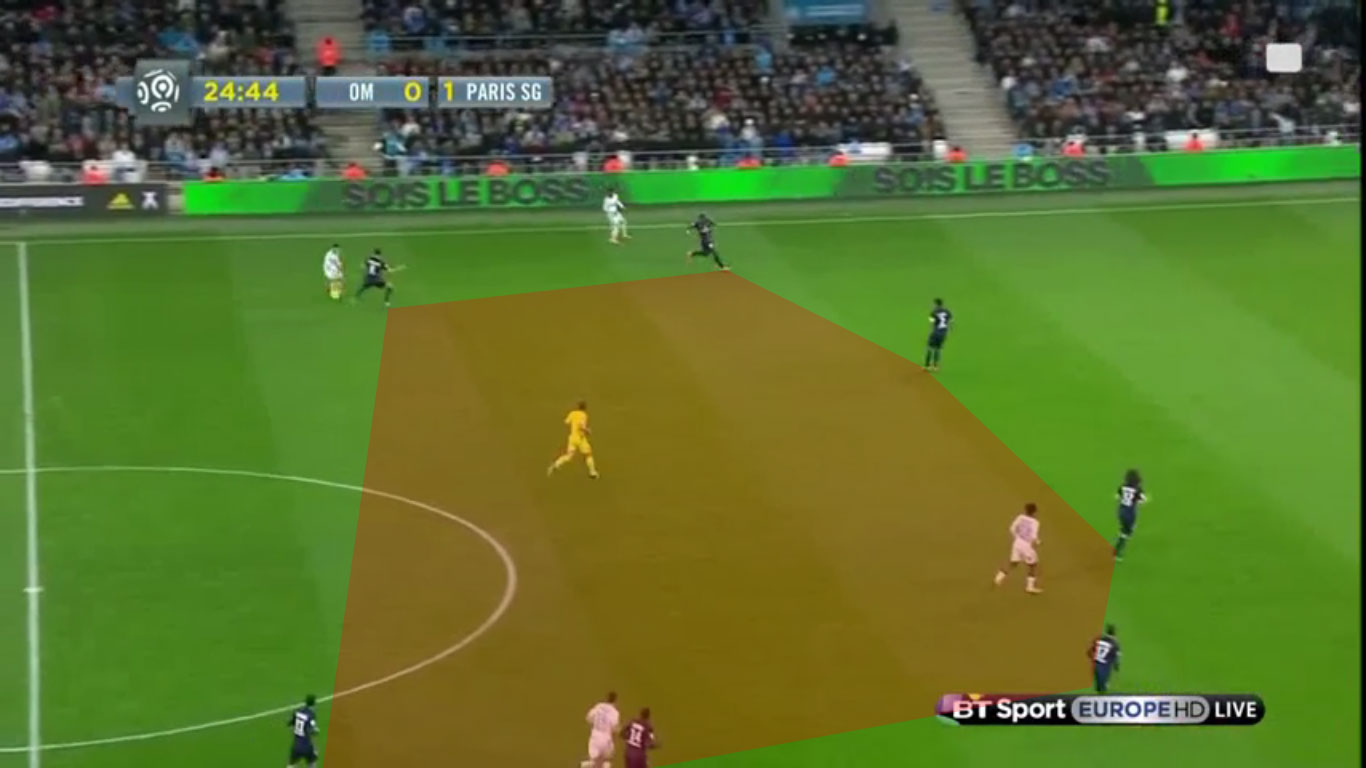 It would be easy to point fingers at individuals – for example, where is Rabiot? He was up front after a good run in one of his brighter moments – but the problem is more systemic. Cabella’s goal was obviously on the counter however there are things you can do to stop it. The major tactical innovation over the last few years has revolved around counter-pressing. Immediately pressing once you lose the ball is nothing new in football, but this focus on organising it is. The innovation from counter-pressing isn’t just sprinting around trying to retrieve the ball after a misplaced pass, it comes from the way teams are setting up in preparation for losing possession so that they can immediately win it back.

PSG make little attempt to cut off the counter at its source and so Marseille can get it forward quickly and catch them upfield as Cabella’s goal showed. This meant that Marseille’s double pivot were mostly left alone after PSG attacks, which suited the pair down to the ground – Lassana Diarra has a good passing range while Mauricio Isla is good at running with the ball, meaning the pair could easily start attacks.

There are strong reasons as to why PSG can’t just start counter-pressing though. At 34, Ibrahimovic isn’t going to winning foot races with a lot of defenders any more and so the attacking depth must come from the wingers. Here Di Maria and Lucas stayed high up against the full-backs to ensure they couldn’t just push up and shorten the playing space for PSG. Due to this PSG have a front three who are limited in what they can do defensively and the midfield has to cover more ground to account for that.

Marseille’s grip on the game grew as it wore on, then in the 72nd minute their defence sleepwalked through defending a throw-in and Di Maria scored. PSG sat back, denying Marseille useful space to break into. Mostly undeserved but they remain undefeated all the same.