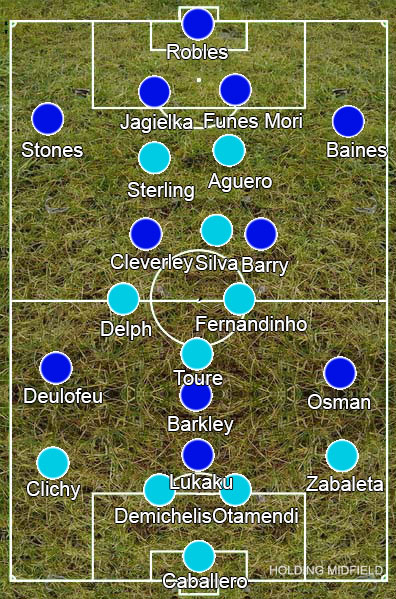 Although in very different situations and neither in any peril, both Manchester City and Everton aren’t particularly happy with how their seasons have gone. City once again looked to improve their squad with heavy investment in the summer, spending over a hundred million on Kevin De Bruyne, Raheem Sterling, Nicolas Otamendi and Fabian Delph. Nevertheless, City still don’t appear to have moved forward much from the side that won the league under Roberto Mancini back in 2012. With the investment pumped into the squad, you would have expected them to kick on at some point yet, despite the talents they have brought in, they remain on the same level.

Everton are some way from the drop zone but should be in the top half of the table. A dysfunctional defence means they aren’t capitalising on a strong attack, so a chance at a trophy is more important to Roberto Martinez than his opposite number to keep the wolves from the door.

Manuel Pellegrini picked a 4-4-2 diamond for his side (from my knowledge this is the first time he’s ever done so – any confirmation by those more informed on City would be appreciated – although he did use a diamond while at Malaga), while Martinez set up Everton in a 4-2-3-1 to protect their 2-1 lead from the first leg.

Unsurprisingly with so many central players, City controlled possession from the start, however they rarely threatened. Fernandinho and Yaya Toure are both good at carrying the ball forward but neither are particularly good at picking it up off their defenders and passing it out from the back. It’s always been problematic that the pair step on each other’s toes in a double pivot so having Toure alone at the base eliminated some of these issues, but it doesn’t help City move the ball up the pitch.

It was seen a little bit in the build-up play that occurred right before Everton countered to score the opening goal:

This isn’t much of a problem in this context as City would want to play it out to the wings anyway – the diamond could be used to narrow Everton’s midfield and make space – but it’s more notable in other games.

Alongside them, Delph simply isn’t all that talented but he at least works hard – his role here was to provide balance by pulling out to the left and making quick direct sprints to distract the defence, keeping them on their toes. David Silva struggled to get on the ball and had to come deep as always to help play it out, which meant it was Raheem Sterling that showed the little flashes of attacking play in the early stages. He and Sergio Aguero looked to split the centre-backs and run in behind, but their main use was dropping between the lines whenever Silva drifted off. Aguero often came a bit too deep and would get stuck trying to dribble through, however Sterling’s movement was more subtle – he would wait until someone was able to play into the free space before darting off the defensive line into it, immediately laying off the ball when he received it to get City moving quickly.

Everton took the lead though. After a failed City attack, Everton played it down the left. Toure’s defensive troubles are well documented so this was another to add to the collection: caught in two minds between tracking Ross Barkley and stopping Leon Osman he doesn’t quite do either, allowing Osman to slip through a ball for Barkley. Otamendi was slaughtered by pundits for his part in the goal although, while he doesn’t cover himself in glory, others were far more at fault – he goes to ground too quickly and as a result doesn’t get close enough to contest with Barkley, but he was having to scramble across to cover others. Delph was far more guilty, failing to come across early in the move then being embarrassingly sold be a simple dummy as Barkley was obviously looking to line up his shot. City’s poor defensive record without Vincent Kompany put some of his mistakes – such as against Roma last season – in perspective: these high positions he takes up have led to goals but the lack of protection the midfield affords them may mean conceding even more if he doesn’t. Demichelis has always struggled with it and while Otamendi is starting to get to grips with the issue, the start to his City career has been a baptism of fire.

City then equalised minutes later – no one contesting a goal kick leading to a heavily deflected shot from Fernandinho. The momentum didn’t swing back in City’s favour though. Everton looked dangerous every time they broke – Barkley constantly getting on the ball and driving at that soft belly in front of the defence.

Pellegrini made a change at half-time, bringing on Jesus Navas for Fabian Delph as they switched to a 4-2-3-1 with Sterling moving wide left and Fernandinho slotting alongside Toure. Having Fernandinho screen the back four meant Toure could push forward and as a result City were succeeding in pushing Everton deep into their own half. Barkley’s driving runs were nullified not by Fernandinho, but by City forcing Everton so deep that Barkley only ever got the ball in his own third.

Martinez responded with a double change, bringing off both wingers for James McCarthy and Arouna Kone. Pellegrini had matched Everton’s formation so Martinez switched to Pellegrini’s starting 4-4-2 diamond. It made sense: the extra men in the middle meant they could work the ball forward easier while an extra man up top meant Lukaku wasn’t as isolated, so they could both look to keep the ball to protect their lead and hoof it forward to get up the pitch and stop City from camping out around their area.

The drawback is that the team becomes narrower and this soon became a massive problem for Everton. First Sterling picked up the ball on the left flank, got to the byline (then went past it a little bit admittedly) before cutting it back for substitute Kevin De Bruyne to finish. Six minutes later, De Bruyne had the time to pick out a cross on the right for a perfectly placed Aguero header.

Everton had no reply.

With pressure heating up, the loss harmed Martinez’s position more than the win strengthened Pellegrini’s. Winning Everton their first trophy since 1995 would have likely secured his position against an increasingly angsty crowd, but now the chance is gone he’s left with a struggling side in the league without last season’s excuse of the Europa League. Pellegrini has a strong shot at another trophy but he’s never really reached his full potential at City – that they have spent hundreds of millions yet trail Leicester is as good a reason to give Pep Guardiola whatever he wants to manage them as any.