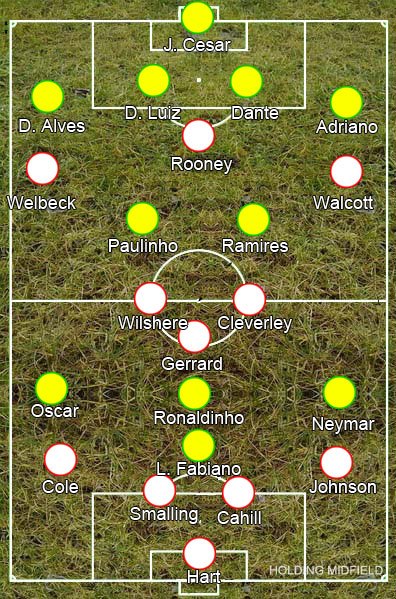 The last time Luiz Felipe Scolari coached Brazil against England, both teams were in very different circumstances. In their 2002 World Cup quarter-final, they lined up against each other as two of the best teams in the world. Scolari had rescued a trainwreck of a qualifying campaign and was on his way to guiding Brazil to their fifth World Cup, while Sven-Goran Eriksson had forged a quality-filled base to defend for the excellent partnership of Michael Owen and Emile Heskey. Now, however, neither team looks close to that quality.

After the embarrassment of failing to win their last World Cup on home turf in 1950, Brazil are understandably desperate to win the 2014 World Cup, but their hosting appears to have come at the wrong time, with their player pool stuck between generations. The generation Scolari used to win his first World Cup are mostly retired or on their way out, while the next lot of stars are still young. Those who are in or around their prime are the likes of Thiago Silva or Ramires – quality players, but not the most creative of types. Mano Menezes was sacked after poor showings in the Copa America and Olympics – his philosophy not fitting in with the players he had at his disposal – but whether Scolari will manage to rescue Brazil this time is up in the air.

Big Phil has proven himself to be an accomplished and pragmatic coach, yet he may just not have the players to get Brazil working again. Against England, he picked a fluid front four spearheaded by Luis Fabiano in a 4-2-3-1, while England ventured away from Roy Hodgson’s typical 4-4-2 with a 4-3-3.

At Euro 2012, England grinded their way through the groupÂ  before exiting on penalties to Italy. Although they managed to hold the finalists to a draw, England were outclassed thanks to them giving Andrea Pirlo as much space as he wanted to dictate the game. Against Brazil, they appeared to have learned from their mistake, looking to close down the opposition high up the pitch. Wingers Danny Welbeck and Theo Walcott tracked Dani Alves and Adriano, while Jack Wilshere and Tom Cleverley pushed up against Ramires and Paulinho, making it difficult for Brazil to get the ball out of defence. By cutting out the short options for the defenders, the only option for Brazil to get the ball to their attackers were long balls, which would suit England’s stronger more physical play better than the slighter Brazilian frontline.

Similar to the gameplan under Fabio Capello, the attacking focus was on Theo Walcott. Poor touches frequently let him down, but the main strategy seemed to be sliding the ball through so he could make a diagonal run behind the Brazilian defence. It mostly didn’t work, but it did result in the first goal, as Walcott was played through, his shot fell to Wayne Rooney to finish.

The only way Brazil were able to get the ball forward was when England’s wingers came inside when attacking, leaving the Brazilian full-backs free. They would then race forward or try to curve the ball into the free attacking players from their wider angle, who were left in lots of space with England’s midfield dragged high. Although England had better control over the game, Brazil were having the more dangerous breaks. As Walcott wasn’t playing particularly well, the only real chances for England came from the play of Wilshere, whose willingness to run at players forced players to close him down, creating space for whoever he would slip the ball towards.

After England’s goal, Brazil put a lot more focus on hitting it wide for their full-backs. Regardless of how they were tracked, they began getting Adriano and Dani Alves forward and pumped balls in their direction from deep. The ball mostly trickled out of play but the plan was to presumably stretch England and have the full-backs running at enough pace to make defending them very difficult. Like a no deposit free bet, it was still a gamble but given their other options, there wasn’t much else they could do to get the ball forward.

Although they did make an effort to press, the Brazilian forwards weren’t very good defensively, which meant England found it easier to get the ball forward than their opponents. Nevertheless, Brazil’s goal came from one of the times they actually pressed excellently. When Gary Cahill received the ball, Oscar cut out the simple ball to Steven Gerrard and closed him down, forcing Cahill to run with the ball in the direction of Lucas Moura. He then closed him down, also cutting out the angle for a ball to Leighton Baines, the ball ricocheted to Fred, who had the time to pick out a perfect finish as Chris Smalling couldn’t close him down properly since Moura carried on his run outside. The winning goal was pretty much the same at the other end though. England’s pressure meant Arouca and Paulinho couldn’t get the ball away and substitute Frank Lampard punished them with a superb finish.

Although it remained entertaining, there was little else of note in the second half. Hodgson had obviously reaffirmed the emphasis on Walcott, who was picked out even more frequently and looked to beat Adriano with straight foot races until the Barcelona man was replaced by Filipe Luis, but with the lead the focus was mainly on making things difficult for Brazil.

A bit of an odd game really, as although it was decent to watch, there were few real chances. England did well to throttle Brazil, but, for the most part, their attacking gameplan didn’t work and they may have to reevaluate should they come up against a bteer opponent. Still, Hodgson would prefer to be England manager than Brazil’s right now, as Scolari’s men simply didn’t function in any way offensively.