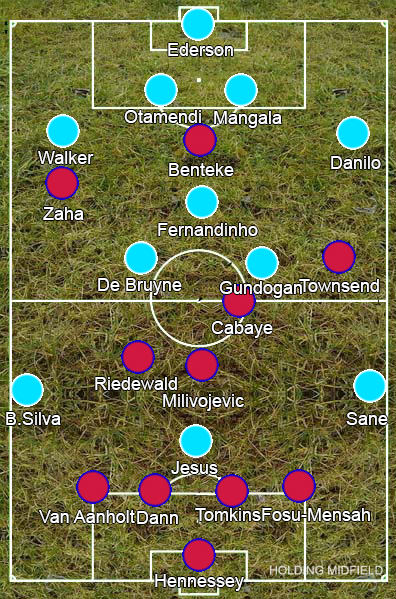 Having started the season in record-breakingly poor fashion, becoming the first team in top flight history to lose their seven opening games without scoring a single goal, Crystal Palace looked doomed. Nevertheless, their performances under Frank de Boer weren’t actually quite so bad as the results suggested. He was unsuitable coming off the back of Sam Allardyce, Alan Pardew and Tony Pulis, but a squad boasting the likes of Mamadou Sakho, Yohan Cabaye, Wilfried Zaha and Ruben Loftus-Cheek wasn’t quite as unsuited to his methods as suggested and, had he been given more time, they may have adapted to the new style.

They understandably panicked though, and reverted back to a more conservative English manager in Roy Hodgson. With greater solidity, Palace have since climbed away from the foot of the table and while they still hover above the relegation zone, it’s worth a bet on an updated site that they will avoid dropping to the Championship as they simply have a superior set of players to pretty much every other team in the bottom half.

Even with the improvement in form however, it was expected that they would come away from a clash against an undefeated Manchester City team on an 18-match winning run with little to show for themselves.

Both teams lined up in 4-3-3 formations, but took contrasting strategies on attacking – City trying to build play patiently, while Palace looked to hit direct balls to Christian Benteke and Zaha as quickly as possible. With City finishing the game with 75% of possession, the match was generally made up of the former rather than the latter.

To combat City’s approach, Palace defended from the front. Alongside the forwards, Cabaye pushed up out of the midfield to press Equalim Mangala whenever he received the ball, before dropping back alongside his midfield colleagues. With City missing several of their better ball-playing defenders, this worked well as they struggled to pass the ball out of the defence and Kevin de Bruyne often had to come very deep to collect the ball and get City moving forward, taking one of their most dangerous attackers away from the frontline.

Palace also maintained a lopsided shape, keeping Zaha higher on the left than Andros Townsend who dropped back in line with the midfielders, which, worried about leaving Zaha with space to attack behind him, kept Kyle Walker pinned back.

The disruption in the first stages of City’s build-up left their attacks slow and having fewer men committed to the attack meant they were always left outnumbered by a packed Palace defence that only ventured forward for set-pieces. Leroy Sane in particular was struggling, taking too many touches.

There was one gap that opened up in midfield though: Jairo Riedewald was dragged out to the left to cover behind Zaha, so a hole would open up between Luka Milivojevic and Townsend until Cabaye had tracked back following his pressing duties. Ilkay Gundogan burst into the box in the opening minutes, making a run behind Timothy Fosu-Mensah with Cabaye unable to catch up, and he and De Bruyne soon switched sides to allow City’s most dangerous player the most space.

As the game progressed and Cabaye covering so much ground became harder, he stopped pressing, instead remaining in the midfield line. De Bruyne and Gundogan switched back to their starting sides and City found it easier to play out from the back with their defenders unopposed, however they still struggled to build any rhythm, and even if they did get into dangerous positions, Palace players would foul them before they could make use of them.

The match remained the same glorified attack versus defence training ground exercise we have seen in so many City games this season, until Zaha was switched from left to right with about 20 minutes to go. Walker had done an excellent defensive job on the Ivorian forward (and once freed from these shackles ventured up the pitch far more) but Danilo found it far tougher – it was his and substitute Raheem Sterling’s failure to deal with him that led to the late penalty saved by Ederson.

In the wake of the game, Palace’s performance was held up as brave and as showcasing the right gameplan to finally defeat City, but in truth they pretty much did what every other team has done: sit back and defend in numbers then try to get at the defence quickly when possible. The difference was they simply came up against a weaker City side than many of their peers.