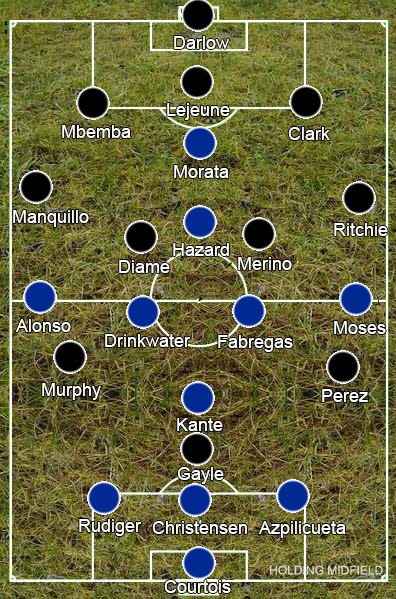 Rafa Benitez returned to his former club on Saturday, but there were few expectations of a triumphant return. Newcastle made a reasonable start to the season but a middling squad has seen an unsurprising downturn in form, with hope of the team being bolstered depending on Mike Ashley finally relinquishing his grip on the club.

Chelsea haven’t set the world alight this season, arguably weakening their team over the summer, but the expectation before the game was that Chelsea should have enough to overcome Newcastle – an easy bet for anyone looking to make use of betting bonus offers.

Antonio Conte continued with the 3-5-1-1 formation he’s mostly opted for this season, while Benitez ventured away from his usual 4-2-3-1, lining Newcastle up in a 3-4-3, with Matt Ritchie moving back to wing-back and Ayoze Perez and Jacob Murphy flanking Dwight Gayle.

As has happened frequently this season, Chelsea started slowly. Slow to move the ball and untidy on the ball, it was unsurprising that they essentially gifted the opening goal away. A lack of sharpness that has been exposed multiple times already this season, most notably in their loss to Crystal Palace.

This played into the hands of Newcastle, who looked to sit back and force Chelsea to break them down. Typically Gayle would hover around N’Golo Kante, while those behind him dropped back into a line of five and four. This essentially left Chelsea’s back three free on the ball, but with all those ahead of them were crowded out by nine players. None of the back three, or Kante when he dropped back, had the ability on the ball to pick out those ahead of them, so Chelsea struggled to build up. Eden Hazard and Cesc Fabregas would frequently look to drop back to the base of the midfield to collect the ball and help the build-up but Mohamed Diame would follow them, pressing to stop them turning on the ball.

Their game based on defensive solidity, Newcastle didn’t want to push too many men forward, so their gameplan mostly consisted of long balls up to Gayle for him to chest down for Perez, Diame and Murphy behind him, generally winning these challenges despite being up against three centre-backs and Newcastle finding it easy to win the second ball with three players closing in around Kante. Alternatively they would attack more patiently down the right, stretching Chelsea’s backline with Murphy and Javier Manquillo doubling up on their left side and Perez and Gayle looking to pounce on the resulting balls into the box.

They scored the opener from the former type of attack: Gayle chesting down a long ball for Murphy, then finishing in the scramble as Chelsea’s defenders never deal with the threat.

However, while the disconnect between Chelsea’s attack and defence meant it was hard for them to move the ball up the pitch, it also meant that they committed plenty of players to the attack. As well as the wing-backs high and wide, both Fabregas and Danny Drinkwater would push on, either pulling wide to help the wing-backs or occupying centre-backs or midfielders in the middle, acting as decoys to get Hazard on the ball.

The ball would be played down Chelsea’s right, with Fabregas pushing very high up, forcing a Newcastle centre-back to pick him up, then darting back towards the player on the ball as if he was going to receive a pass. The centre-back would follow him, leaving space behind him for Hazard to attack and the player on the ball would loft a pass over the top for Hazard. The back five probably messed with this plan by giving Newcastle an extra man at the back, meaning Hazard wasn’t typically free when he received the pass, but it did eventually work as shown by the equalising goal.

Despite their poor start, Chelsea had taken control of the match as soon as Newcastle had scored. In need of a goal, their centre-backs now felt more comfortable pushing forward into the opposition half, trying to drop long balls into the gap behind Newcastle’s backline. Trying to stay tight between the lines, Newcastle’s defensive line often pushed quite high considering they put little pressure on the man on the ball and the defenders struggled to deal with the balls being dropped into this space – Alvaro Morata’s goal originating from Ritchie’s failure to deal with a long ball from Antonio Rudiger behind him.

Now in the lead, Chelsea could sit back and protect their lead, while Newcastle had to come out and chase Chelsea, making it easier to pass around them. With Newcastle unable to challenge, little happened for the rest of the game – Chelsea sealing their win with a penalty in the 74th minute.