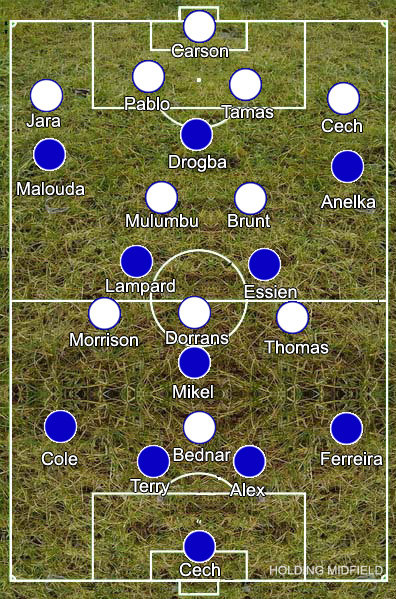 Roberto Di Matteo’s return to Chelsea didn’t go quite as well as he would have hoped for his team, nevertheless the game acts as an excellent example of the difference in quality between the two sides. Despite the scoreline, West Brom didn’t play that badly; Chelsea are just significantly better, even if they barely get out of first gear.

West Brom’s 3 attacking midfielders started off very narrow when not in possession, denying Chelsea’s midfield three much time or space to play in. This worked to a certain point – an unfit Lampard memorably skewed a pass straight into the stands – but neglected Chelsea’s full backs. Both Ashley Cole and Paulo Ferreira were given the freedom to run up and down the flanks,Â  causing a lot of problems. Cole, understandably, was utilised a lot more than his Portuguese teammate and was given more space to run into by Malouda moving inside, often playing directly behind Drogba.

To counter this the wide players in West Brom’s band of three stayed wide, dealing with the full back problem but sacrificing the extra pressure they were putting on Chelsea’s midfielders. John Obi Mikel was the main benefactor of this, free of almost any pressure whatsoever.

Chelsea were brilliantly fluid. It wasn’t unusual to see Malouda and Anelka dropping further back while Lampard, Essien or, very very occasionally, Mikel took up a position higher than them. Around the 30 minute mark the Chelsea front three began to switch positions; Drogba dropped to the left, Malouda to the right while Anelka moved into the striking position then Malouda went up front and Anelka went back to the right and so on. This wasn’t the usual switching along with the flow of possession: they stayed in these positions when West Brom had the ball for extended periods of time.

West Brom weren’t as awful as the scoreline would suggest. After some initial hiccups in controlling the ball – perhaps through nerves or the wet pitch – they passed the ball well. Centre back Gabriel Tamas wasn’t hesitant to run with the ball into the opposition half like Daniel Agger or Lucio, but his passing left a lot to be desired. Like Bastian Schweinsteiger, Chris Brunt’s been converted from a winger to a holding player; unlike Schweinsteiger, he appeared largely wasted in that role. Jerome Thomas was West Brom’s most dangerous player, constantly beating Paulo Ferreira with ease then sending in a woeful cross. Despite lacking any sort of end product, Thomas was fairly impressive and Ferreira’s parting gift before being substituted was a crunching yellow card tackle through the winger.

For all their good work, West Brom threw it away with some appalling defending from free-kicks. Scott Carson’s pan-handed attempts to stop a Drogba free-kick ensured they were going to find it difficult from the start, but he exploited the consistently awful West Brom wall. If there was any chance of a comeback in the second half, it was destroyed by another poorly defended set piece and from then on the game was a write-off.

Once Lampard was substituted for Yossi Benayoun, Chelsea briefly switched to a 4-2-3-1 with Benayoun in the centre of the three and Mikel and Essien holding. They switched back to the 4-3-3 once Drogba was replaced by Salomon Kalou, although Benayoun still played higher than Essien, who hanged back more than he had when playing with Lampard. This switch was largely irrelevant within the context of the game, but could be an interesting clue towards any future plans from Carlo Ancelotti.

A simple win for Chelsea to start the defence of their Premier League crown and a baptism of fire for West Brom. They may play football “the right way”, but it might come unstuck again against a higher quality of opposition, and so their cycle of relegation and promotion will continue. However, as ESPN’s commentators never ceased in telling us, not every game will be as tough as Chelsea.