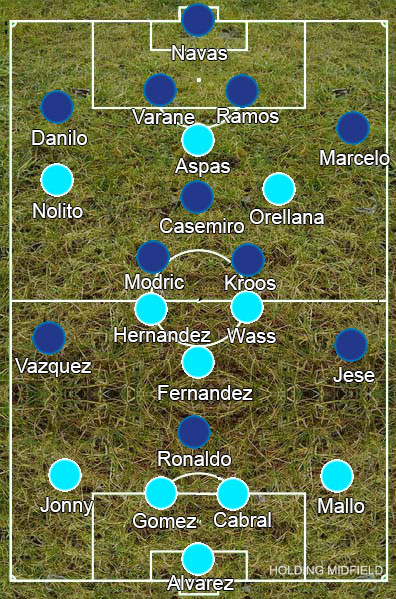 After a testing draw away to Paris Saint-Germain in mid-week, Real Madrid may have hoped for an easy ride come the weekend, but they had no such luck. Undefeated and with a 4-1 thrashing of Barcelona to their name, Celta Vigo have started the season in top form and had a very good chance of causing an upset against an injury-plagued Madrid. Rafa Benitez was without Gareth Bale, Karim Benzema, James Rodriguez, Dani Carvajal and Pepe, while Mateo Kovacic was only fit enough for the bench, although Luka Modric and Sergio Ramos were fit to start.

They switched from the 4-4-1-1 they used in Paris to a 4-3-3, while Eduardo Berizzo didn’t have the selection headache of his opposite number, continuing with the 4-3-3 that has been so successful so far.

Celta have drawn understandable comparisons to Marcelo Bielsa’s Athletic Bilbao: they push lots of men forward, play the ball upfield quickly and defend from the front when it is lost. It’s the defending where the main similarities lie though – rather than mark zonally as is the norm in this day and age, Bielsa’s teams stick very tight to their man, and, as Bielsa’s former assistant, Berrizo hasn’t strayed too far from the path. This can work as it means any player who picks up the ball is immediately under pressure from their marker, however with intelligent movement opponents can open up massive amounts of space to punish Celta.

This was most obvious in the second goal:

It’s this kind of movement that killed man-marking in the first place – Celtic’s attacking full-backs causing havoc with Internazionale’s backline way back back in the 1967 European Cup final. The goal could have been stopped by having Nolito follow Danilo, but then do you really want your on-form attacker playing at left-back whenever you lose the ball?

Nevertheless, it was rare for Danilo to venture this far forward in the first half. He was more concerned with stopping Nolito and instead it was Luka Modric who would make diagonal runs behind Jonny, who would follow Vazquez very high up the pitch whenever he dropped back. Madrid targeted this area even more in the second half, Cristiano Ronaldo and Vazquez interchanging positions frequently and Danilo getting forward more.

It’s easy to see how their pressing game can work though. Sticking so close to their opponent means it’s difficult to pass out of defence as there’s no free man to pass to and no space to turn past them, while a sticky pitch amplifies the likelihood of an error in a dangerous part of the pitch. The problem here for Celta was that Madrid were perfectly content to play a more direct game rather than take those risks and with three nippy forwards it was a functioning attacking strategy.

However, although Madrid managed an early lead, it wasn’t necessarily comfortable. They sat deep in a low block and stayed narrow. Celta’s response was to get the ball wide and send in crosses, which Madrid’s defence dealt with easily, yet a passive approach to defending meant Celta were able to pounce on the second balls and work shots on goal. Fortunately for Madrid, Keylor Navas was on great form, making a series of brilliant saves and always quick off his line to make up for his defenders’ mistakes.

Realising that the momentum was going against them sitting back, Madrid pushed on more in the second half, but a show of dissent saw Gustavo Cabral sent off and several others booked on the back of a fairly minor professional foul. Madrid had already started the half the brighter team so this killed what remained of Celta’s chances of recovery.

Despite Danilo playing well, Nolito was still unsurprisingly Celta’s brightest spark, reviving hopes with ten minutes left to play when he rifled home a shot from outside the area, but Marcelo sealed the win with the last kick of the game.

It wasn’t the kind of victory to win hearts and minds, but given the context it was impressive. Fatigue from a tough mid-week match, a severely weakened team due to injuries and a strong Celta Vigo could have easily conspired to make Madrid drop important points here, yet they came away with all three. The problem for Benitez is that Madrid demand performances that win hearts and minds at all times and, while this approach was perfect for getting a win in difficult circumstances, Florentino Perez is unlikely to see it the same way.