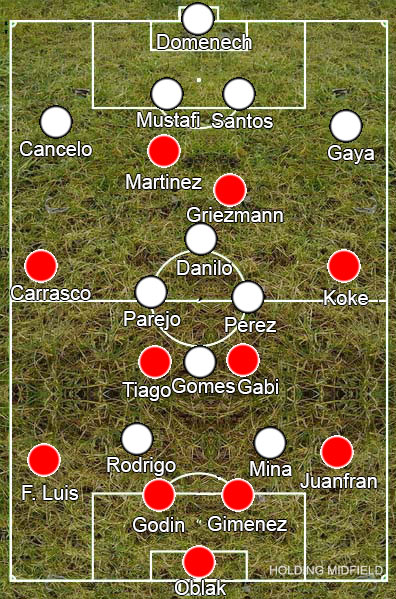 Atletico Madrid are now in an awkward predicament about where they are as a club. They are still and probably forever will be behind Real Madrid and Barcelona in terms of reputation and resources, but they are also quite some distance ahead of the chasing pack. They have solidified their place as Spain’s third team to the extent that they can’t really claim that underdog identity anymore even if it’s still true. If Atleti want to continue to grow, they need to act like a big club and Diego Simeone has gone some way to doing this by adding some sparkle on top of the grit and resilience this season.

The game against Valencia would be the perfect match-up to put it to the test – another strong team fighting for a Champions League spot. Simeone lined up his side in a 4-4-2, while Nuno Espirito Santo went with a rough 4-4-2 diamond, with his midfield moving around fluidly.

The game’s opening was played at a quick pace, both teams pressing intensely, however there was nothing in the way of proper chances. Atletico were constantly hitting it long whereas Valencia were struggling to play the ball through. When Valencia’s centre-backs had the ball, the Atleti strikers would close them down and cover passes into midfield, while their midfield would push up behind them to ensure those midfielders can’t find space, so the ball would inevitably be sent long and Atleti’s defenders could win it easily in the air.

The idea behind the diamond was presumably to drag Atletico’s midfield up the pitch to compete with the deep midfielders and then have Andre Gomes roaming around in the space behind them, however it didn’t work as the ball couldn’t be played through the centre and Gomes could only get on the ball in wide areas – exactly where Atleti try to trap the opposition. The only way to really get around this is to switch play as quickly as possible so that Atleti’s narrow defence can’t get across in time, but it’s difficult to do firstly from a technical standpoint and secondly because Atleti are extremely fit and can cover a lot of ground quickly.

This issue can actually be seen immediately before Atleti scored the opener: 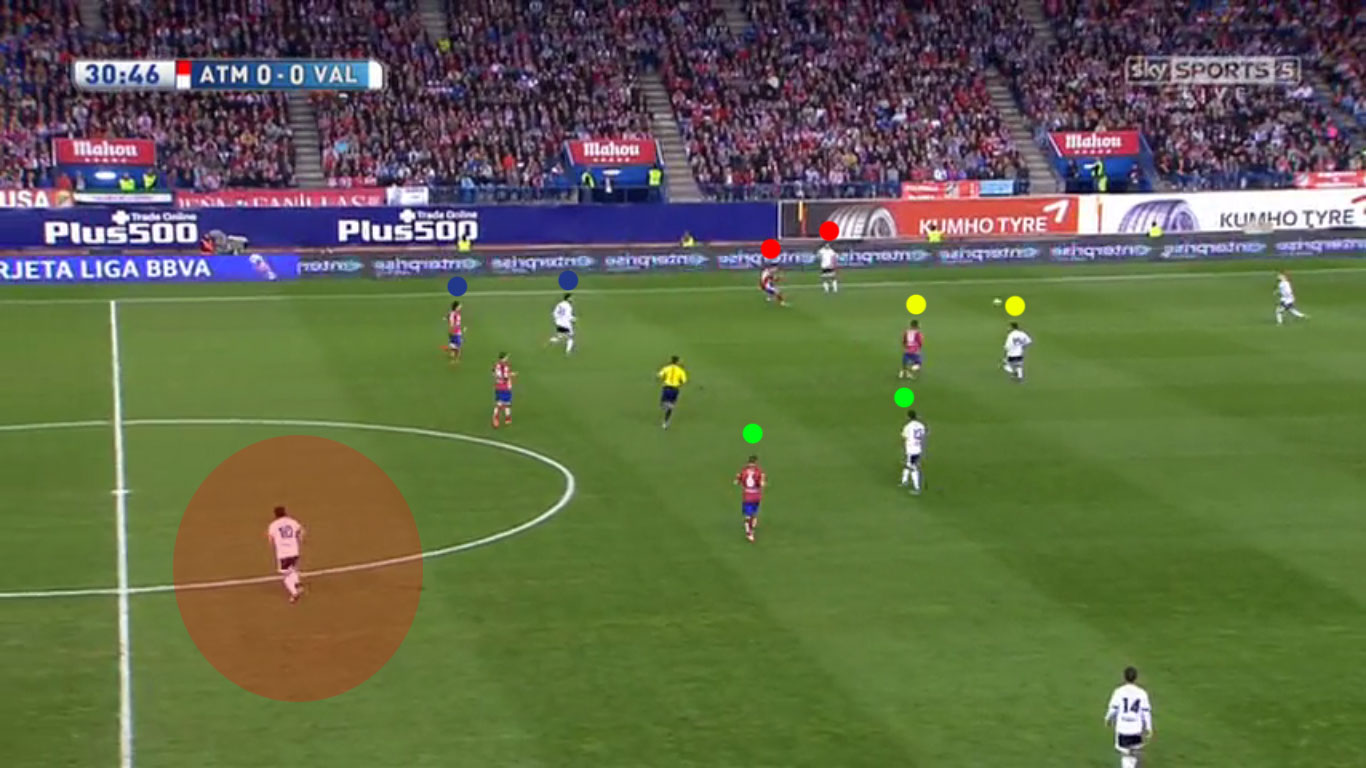 Shrokdran Mustafi has the ball but all his easy passes are cut out (Antoine Griezmann is also cutting out a ball to his centre-back partner Aderlan Santos off-screen). The only open men are Jose Luis Gaya on the left flank, a tricky cross-field ball to someone who could easily be closed down by Koke (green); Dani Parejo (red zone, this would typically be Andre Gomes but the midfield frequently rotated), who can’t realistically be picked out from this position; and his goalkeeper Jaume Domenech behind him, which doesn’t solve anything. 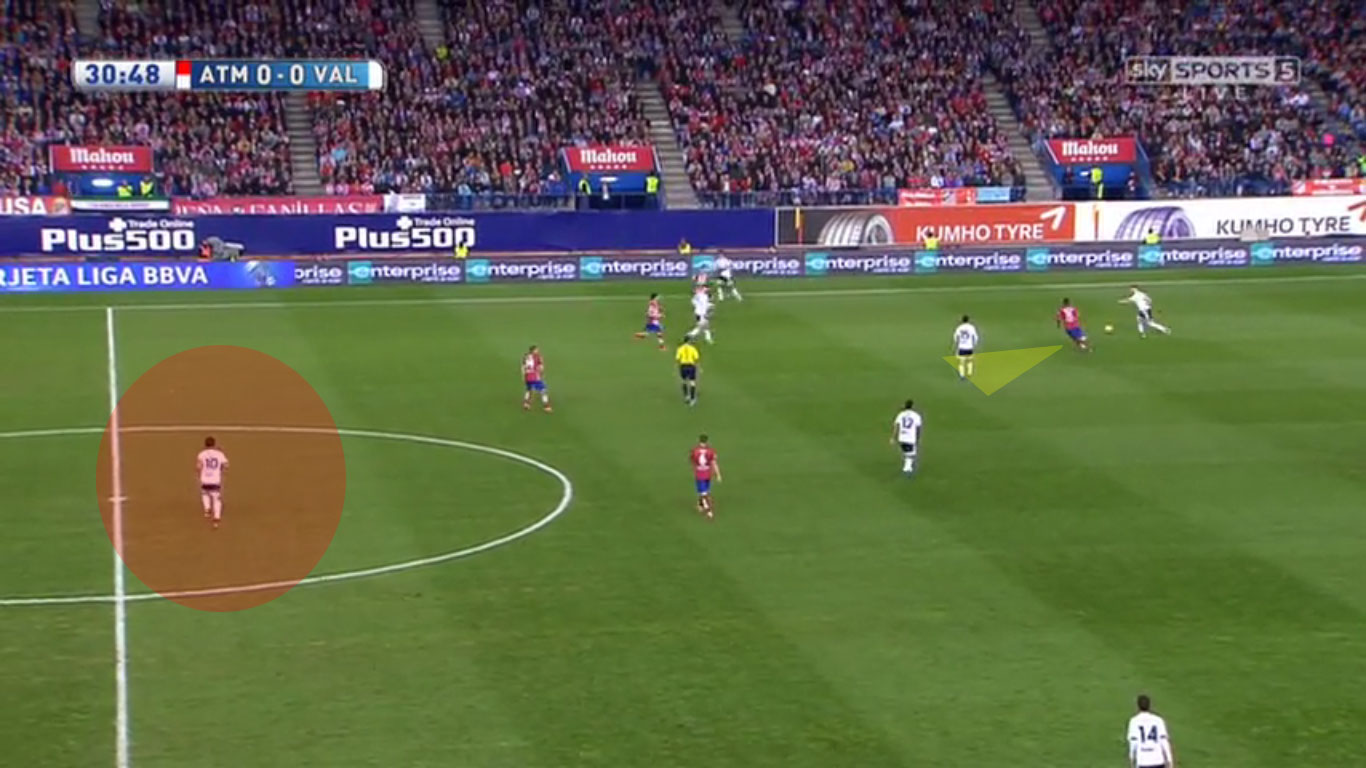 Jackson Martinez then forces Mustafi into making up his mind by closing him down, while angling his run to ensure the ball still can’t be played into Enzo Perez. Mustafi now has to play the ball to one of these under pressure players, hit it long or risk losing the ball. 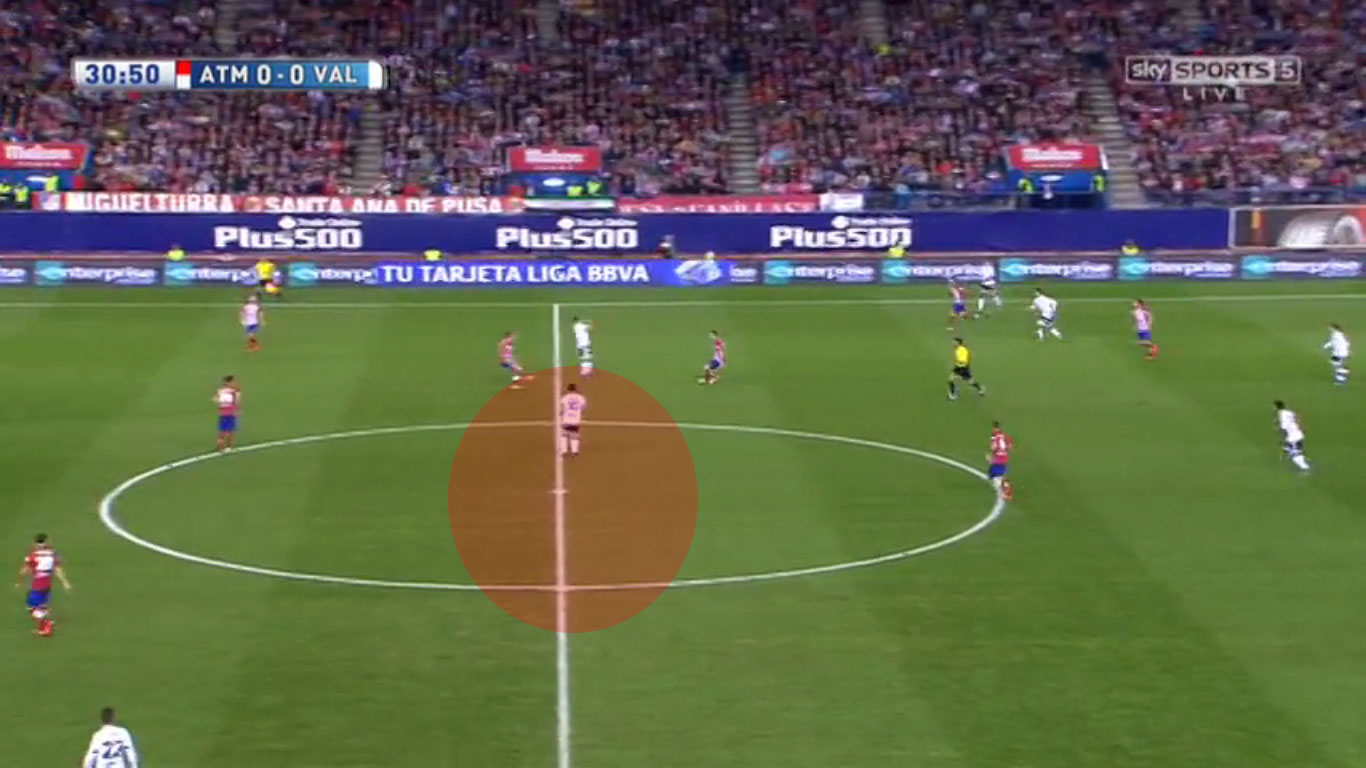 He opts for the second option, Paco Alcacer winning a flick-on which is mopped up by Atleti’s defenders. If the ball is hit long, their defenders are all dominant enough in the air so that they will win it nine times out of ten, yet even if they don’t their team is trained to immediately fight for the second ball, so while there’s a risk the percentages are always in their favour.

Now they had the ball back, Felipe Luis just punted it long. It was another percentage ball from Atleti, but both Mustafi then Santos completely missed the bouncing ball and Martinez was left one-on-one with the keeper to finish calmly. It wasn’t the first time in the match Mustafi had made a hash of dealing with a ball off the ground, so it was a decent example of what Atleti do so well that sets them apart from most of La Liga.

The capital club looked a lot stronger after the goal. They were a bit more patient on the ball, preferring to keep it on the floor rather than hit it long for the forwards to chase. In particular, Yannick Ferreira Carrasco really benefited from this shift in style. He scored a good goal, wrestling away a defender and cutting inside to finish, but he really came alive in the second half, enraging Valencia defenders with some neat tricks as they were starting to get desperate and linking up well with Koke, getting a standing ovation when substituted for Oliver Torres.

Fernando Torres was also added – his age limits how much he can press, but his superior link-up play compared to Martinez made it easier for Atleti to keep the ball – and Griezmann looks a lot better when the ball isn’t sailing over his head even if he wasn’t at his best here.

The shorter passing also helped their pressing a lot. If you only ever pass a couple of metres, then you only ever have to move a couple of metres to defend if you lose it. The long balls meant that Atleti could push up and box Valencia in, but they found it much easier to snap around and squeeze Valencia in midfield when passing shorter, meaning they weren’t going for long periods without the ball.

Switching to a 4-3-3, Valencia came out for the second half looking to get the ball forward a lot quicker. Atleti now wanting to keep it meant they didn’t immediately get it back once it was lost now though, getting more and more jittery until a stupid mistake by Diego Godin gifted them a penalty. Still, Atletico were very much in control – Griezmann and Torres wasting good chances to strengthen their lead – and while things got a bit nervy at the end, Valenica never looked a real threat.

The game followed a weird pattern – Atletico scored two goals when the game was even then conceded when they were dominating. Nevertheless – as they should – they looked the more assured of the two teams. They were tough and organised as they always are, yet they proved themselves capable of showing real flair when they tried to keep possession. With the talent coming through at the club, that kind of style could be a real positive going forward without losing what separates them from their competition.