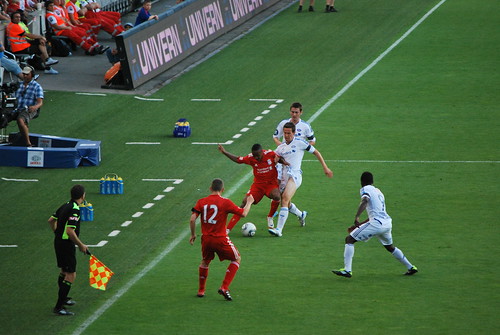 Hello, this will be a recurring piece which will, hopefully, chart the progression and ability of some of the Liverpool Academy players over the next year in the Next Gen Series as well as in domestic competitions. I come into this with a basic knowledge of the majority of these players, having watched them a handful of times and will be attempting to track a realistic eye on their progression.

Last night saw the first game in the inaugural Next Gen Series at Anfield, with Rodolfo Borrell’s charges losing 3-0 in their opening group game against Sporting Lisbon. With many fans casting their first eye over the much heralded group of players, there is likely to be something of a kneejerk reaction in some quarters to the result, but beyond anything the game will come as a good lesson to a group of players with a lot of potential.

The match itself was entertaining with Liverpool fielding, arguably, their strongest XI for the match (aside from not fielding John Flanagan, who could have been considered but is required for first team duties on the weekend) and Sporting playing their exciting prospects also, including standout performers Joao Teixeira and Alberto Coelho.

Tactically, Liverpool played with a 4-2-3-1 with Suso and Conor Coady sitting deep and an attacking three of Raheem Sterling, Jonjo Shelvey and Toni Silva behind Adam Morgan, with an emphasis on trying to utilise their skillful wingers to get behind Sporting, but often they found very little in the box to aim for.

The notable difference over the first half – where Sporting inflicted most of their damage – and also as a general trend over the ninety minutes, was how Sporting’s players were more adept at manipulating and controlling the space on the pitch as a unit. Offensively, they managed to exploit the space behind young centre back Matty McGiveron for both of their goals, pulling him out of position and getting in behind him and Jack Robinson on the left of Liverpool’s back four. While defensively, aside from a couple of good breaks from substitute Michael Ngoo and Sterling, they defended resolutely.

One of the worrying trends, with McGiveron, in particular as well as a couple of others, was how Liverpool consistently looked to find Sterling on the left wing, with McGiveron guilty of losing the ball trying to do so on several occasions, and by doing so bypassing Suso, Coady and Shelvey in the middle of the park. Sterling is undoubtedly one of the most talented players of his generation, but Liverpool were often one-dimensional in the first half in trying to force him into the game, rather than building good platforms in midfield first and then trying to involve him higher up the pitch with more options available to him.

Adam Morgan, who is renowned for going on a run of scoring in 14 consecutive games last year, was energetic and clever with his movement in the first half, but without many players joining the attack from deep, when he moved out into the wings Liverpool occasionally lacked a focal point in their attack, and their overall game improved with the more direct Michael Ngoo, which isn’t to say that Morgan had a poor game, but he didn’t give Liverpool the outlet they needed.

Sterling himself was one of the highlights of the game, consistently looking dangerous on the ball, but at times he looked to do too much. His decision-making at times was erratic, and although he is capable of scoring wonderful goals, there are times when he should look to help progress the attack rather than finish it, but he is still young and learning his trade and if any of his mazy runs are to go by, he’ll go a long way. He is definitely still very raw, but his potential is massive.

One of the other big prospects in the youth ranks at club is Suso, the young Spaniard, who has been used deeper so far this season (much as Dani Pacheco was during his development) to try and get the young starlet to get used to not having so much time on the ball as well as being stronger on the ball also. He had a relatively quiet game and found himself missing a glorious opportunity in the first half after strong work from Morgan down the flank. He is still undoubtedly as skillful as Sterling and has a bright future, but will have to adapt his game to the more competitive rigours of reserve football, and hopefully, eventually first team football.

There is an abundance of attacking quality within the squad and, although they aren’t as talked up as Sterling or Suso, Krisztian Adorjan, Silva and Ngoo also showed flashes of brilliance over the course of the game and will hopefully play a more influential role later in the competition.

Defensively, the game will prove in the long term an important lesson for some of the players as they faced a much different proposition to what they are used to in domestic football, with Sporting far more progressive than the majority of the sides they face week in week out. The leadership of Coady was exemplary and his tenacity in midfield helped counteract the occasional inaction of Suso, who in his defence was playing in a new position, while Andre Wisdom and Stephen Sama also put in good displays.

Up next will be a difficult trip to Molde, where Liverpool will be hoping to get off the mark in the group as well as revel in and learn from the experience of a first European away. Although the result was disappointing, the players gave good accounts of themselves and will hopefully come back stronger for it.