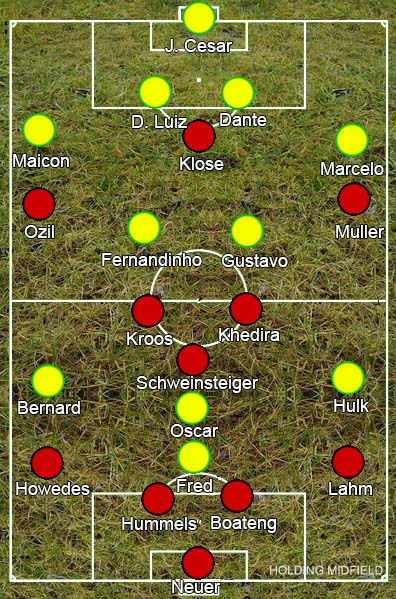 It seems weird to think about it now but, going into the game, these two giants of world football were evenly poised for a place in the final. Neither had impressed but had managed impressive feats in getting to the semis: Brazil had opened up the games against Chile and Colombia to unravel the two teams of the tournament, changing them from energetic to frantic, while Germany have looked sterile but in control with their quality-laden squad, most notably against France. With home advantage (and more importantly some suspect officiating up to now), the slogan adorning Brazil’s team bus,Â  “Brace Yourself – The 6th Is Coming”, wasn’t just optimism. As history unfolded before our eyes, that phrase had more to do with Andre Schurrle than anyone would have expected.

Brazil started the game in the 4-2-3-1 they have roughly used as a template throughout the tournament, with Dante and Bernard replacing missing stars Thiago Silva and Neymar, and Germany made no changes to their 4-3-3.

Considering the eventual outcome, the opening minutes of the game were nervy and bitty from both sides. They struggled to keep possession with the ball scrambled from side to side, yet Germany still took the lead after ten minutes from a set-piece. It was poor defending but Germany were also clever to block David Luiz, allowing Thomas Muller to finish unmarked, showcasing one of the problems with man-marking when the defenders fail to hold onto (and risk conceding a foul to) their opposite number.

The game was still evenly matched at this point and there was a sense of deja-vu to Germany’s victory over France, where Germany hadn’t done much to deserve the win but France offered nothing to change the result. That didn’t last long.

A major difference to previous games was how adventurous Marcelo was being. Luiz Gustavo was doing a rough job of covering him, but time and again the left-back was caught out by Thomas Muller and Sami Khedira high up the pitch having ventured forward. This is a risk you take with attacking full-backs but the benefit was essentially rendered pointless by Germany’s pressing game, forcing the Brazilian defenders into hitting long diagonal balls that cut out the midfield, and Marcelo, every time. This had been fine for Algeria, who had exposed the lack of pace in Germany’s defensive line with balls into this area, yet Fred was just as slow as the German backline so never posed a threat.

The second goal initially came from a throw-in where Marcelo had been caught high again, yet what followed was a catalogue of defensive errors that allowed Miroslav Klose to get his record-breaking goal. By the third, Philipp Lahm had clocked onto Marcelo’s wandering and joined the attack, crossing for the unmarked Toni Kroos to finish, although Muller, equally unmarked, could have just as easily got a second had he not scuffed his swing at the ball. Brazilian heads were completely gone.

Straight from kick-off, Kroos pounced on Fernandinho. Khedira was pressing Dante and forced him into playing a pass out to his midfielder, who, blind to Kroos rapidly advancing behind him, immediately lost the ball on the edge of the area. A quick one-two between the Germans and the situation was going from hopeless to historic. The Brazilian attempt to lay to rest the ghosts of 1950 was only being done by providing an even greater embarrassment.

The fifth was sheer desperation: David Luiz clears the ball, Mats Hummels strides straight between Oscar and Hulk, past Fernandinho dragged wider by Kroos and David Luiz races out in an attempt to stop him, leaving a gaping hole in the middle of defence.Â Brazil hadn’t been able to get their midfielders on the ball in the opening half hour, but now they didn’t want it, wearing the faces of men who will still be talking about “the incident” when they are grey and wrinkled. Luiz Felipe Scolari changed the side to a 4-3-3 for the second half, although he was basically rearranging the deckchairs on the Titanic.

It was the match where all of Brazil’s problems finally came to a head. The incredible amount of pressure put on them to make amends for 1950 saw them crumble in record time. Those pointing out that Brazil haven’t played joga bonito since the nineties somewhat missed the point that this is still the worst generation of players to play this more pragmatic style – the Brazilians hosting their second World Cup at the worst possible time for them. And that’s ignoring the issues off the field: people have been uprooted from their homes for an $11 billion humiliation made all the worse by the fact that (whisper it) Germany aren’t even that good.