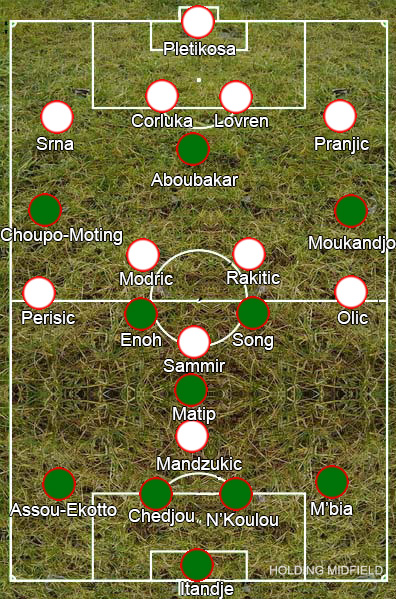 The two teams both lost their opening games of the tournament, but looked like they were playing at different levels despite their similar fortunes. Croatia performed admirably against Brazil and could blame their loss partly on some poor officiating (which Stipe Pletikosa would presumably prefer everyone focus on), while Cameroon were only spared an embarrassing scoreline against Mexico by a suspect linesman.

This game still looked like it could be an interesting contest however, with Crotia’s midfield made up of clever, supposedly defensively fragile playmakers and Cameroon’s of uncreative yet defensively strong battlers.

The two coaches set up in mirrored formations – Niko Kovac continuing with the 4-4-1-1, replacing Mateo Kovacic, who had struggled in the opener, with Sammir, and Volker Finke in a 4-3-3, moving Stephane M’bia to right-back for Joel Matip to come into the midfield while Vincent Aboubakar led the line in place of the injured Samuel Eto’o.

The game was decided by the flanks rather than the midfield battle however. Darijo Srna overlapped, occupying Benoit Assou-Ekotto so Ivan Perisic was free to pick out Ivica Olic for the opener. Perisic met a terrible goal-kick by Charles Itandje and raced uncontested through the Cameroon half to grab a second. The third was a simple counter-attack, cutting through a midfield that no longer had the numbers to stop them. The last a tap-in following a cross by Kovacic on the right.

Cameroon also had some joy with Benjamin Moukandjo twisting away from Danijel Pranjic’s tight marking on several occasions, but they lacked the cutting edge of the Croatians.

It may be more accurate to say the game was decided by Alex Song’s silly red card though. A goal and a man down, Cameroon had no way of getting back into the game or of dampening a more talented Croatian team, who soon ran riot.

Croatia have given themselves a fighting chance going into their final group game against the impressive Mexico, while a Cameroon team that came to the tournament in disarray look to go home in embarrassment unless they can save face in their match against the hosts.