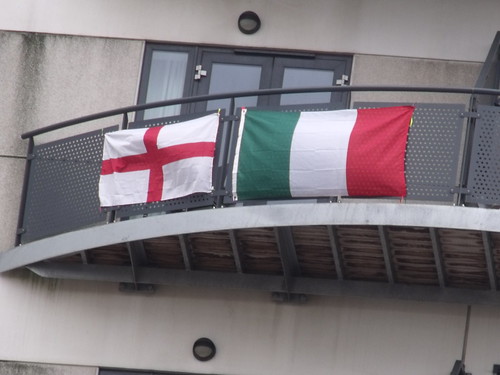 All statistics are from InStat Football.

Post-match the focus was on the Juventus man, just as it had been before the game. Pirlo had been singled out as the one England needed to stop and yet they did an appalling job of doing so.

Early on, Danny Welbeck and Wayne Rooney combined to do an okay job of tracking him, completing half as many actions in the opening 15 minutes as he managed mid-way through the second half. Clearly though, this didn’t last – Daniele De Rossi dropped deeper to provide another outlet, diverting English attention away from Pirlo.

The result was that Pirlo had free reign over the game, finishing as the only player to complete over 100 passes. Gianluigi Buffon and Mario Balotelli were the only two players to not have Pirlo in their top 3 most frequent receivers of passes, showing he had a constant supply of the ball. There were few patterns in what Pirlo did with the ball – he would prod the ball towards his other midfielders, knock it out for his full-backs or Antonio Cassano in wide areas or pick out Balotelli with a ball in behind England. What he rarely did was pass backwards – with so much space afforded to him, he had no need to create more. Pirlo had a magnificent game, but it isn’t as if he needed to work to do it – England let him.

The evidence of Pirlo’s influence won’t come as a surprise to many and Joe Hart completing the most passes for England probably won’t shock many either, despite how poor his kicking is. What’s more, Italian substitute Alessandro Diamanti managed to complete more passes than eight England players.

The vast majority of Hart’s kicks were hit long (45), with just one classed as short. To some extent these long balls were successful, with England winning 38 of 54 aerial challenges, but their two shots on target would suggest there’s a sizeable difference between winning the ball in the opposition half and creating a chance from it.

In the first half, England seemed to be more adventurous, Ashley Cole and Glen Johnson getting forward to expose Italy’s lack of wide midfielders to stop them.

Federico Balzaretti did okay, winning 9 of his 13 defensive challenges but Ignazio Abate found it more difficult, managing to win just 6 of his 13.

However, while average position diagrams (fig. 1) show Johnson, Rooney aside, as the highest positioned player in the first half, he and Cole dropped much deeper in the second, signalling England’s lack of ambition.

As evidence of “justice being done”, the Italians’ shot total of 37, more than England managed at the entire tournament, was pointed out after the victory. Italy were without doubt the more deserving side, having been the only team to show any real ambition or quality, but this stat doesn’t really show the full picture.

Out of those 37 shots, just seven of them were from inside the English penalty area, and only two of those were on target. The Italians had a frustrating habit of shooting from range rather than attempting to break down the English defence – the only success to really come from them being a Hart spill at the feet of Balotelli then Riccardo Montolivo after a De Rossi strike.