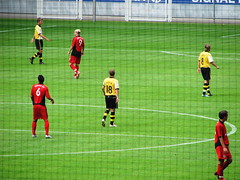 Holding Midfield is now collaborating with the lovely folks over at InStat Football, who provide us with a huge amount of detailed statistical reports on several leagues, giving us the option of getting nerdier than ever before. They will mostly be used to supplement existing features, but there will also be fairly regular reports like this to give a fresh perspective on matches.

With ten players in the midfield, moving the ball through this area was difficult for both sides, and with 6ft 4 Stefan Kiessling up front, a more direct approach made sense for Leverkusen. Kiessling recieved 50 passes, more than any of his teammates, and only one combination (centre back Omer Toprak to his partner Stefan Reinartz at 14 passes) was used more than goalkeeper Bernd Leno to the striker (13 passes).

Dortmund, on the other hand, stuck to more patient build-up play. Their striker Robert Lewandowski received half as many passes (25) as Kiessling, while both of Dortmund’s holding midfielders Ilkay Gundogan and Sven Bender received over 50 passes. Unlike Leno, Dortmund keeper Roman Weidenfeller opted not to hit the ball long to Lewandowski, aiming just two passes his way, the majority of his passes going to Neven Subotic (10).

2) Mats Hummels unable to move ball out of defence

It was notable that it was Subotic and not Hummels who was the recipient of most of Weidenfeller’s passes, getting just two passes from the keeper, given the latter is much more comfortable on the ball. Aware of the larger threat Hummels posed, whenever Dortmund tried to build from the back Kiessling would hover more towards him than his Serbian partner. This meant the emphasis was on Subotic to get the ball out of defence. He received the ball more than any other player (61) and attempted more passes than any other player (84) whereas Hummels received the ball just 29 times and attempted just 58 passes, despite his best efforts though, he simply isn’t of the same technical quality as Hummels however and it wasn’t until

Although it didn’t have as great an effect as it could have done because Leverkusen were happy to play a more direct game, Dortmund looked to force them into mistakes by pressing them. While Dortmund only lost the ball ten times in their own half, Leverkusen gave it away in dangerous areas more frequently: 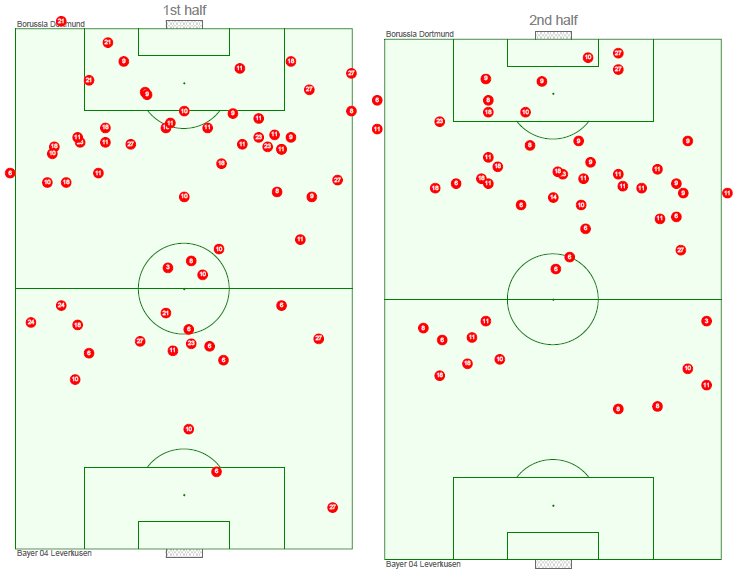 A large part of Leverkusen’s defensive success in this game came from them nullifying Kagawa. Despite arguably being the star of the young Dortmund side, Kagawa received the ball just 27 times, whereas his opposite number Renato Augusto at Leverkusen received it 37 times, even though they were looking to play a more direct game.

That number would probably have been much lower too, had it not been for the sending off of Michael Kadlec opening up more space for Dortmund. In the first half, Kagawa completed just six passes, none of them in particularly dangerous areas, but in the more open second half he managed 15.

Although it wasn’t a poor match, both teams will be involved in more entertaining clashes this season. Between them, they managed nine shots on target, with just four of those shots coming from inside the area.