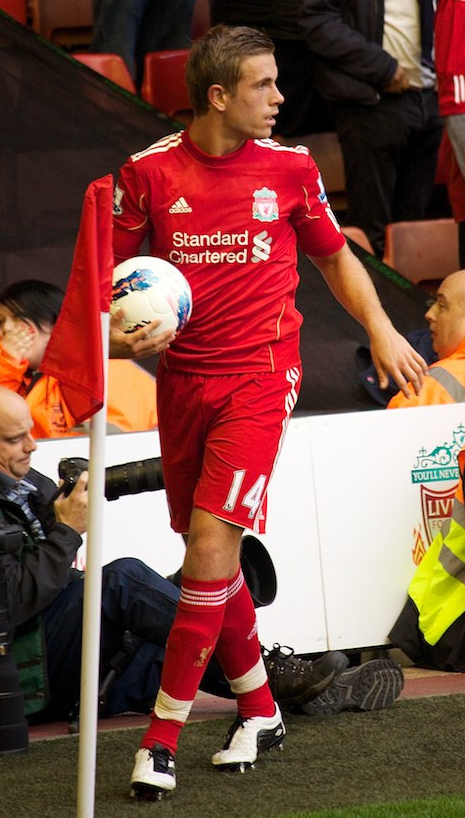 Over two years ago I wrote an article on Lucas Leiva. The Brazilian had become a scapegoat among Liverpool fans after struggling to adapt from the much less physical and slower Brasileirao. His faults were obvious, but the qualities that made him worth persevering with aren’t typically appreciated in English footballing culture – neat passing and clever positional sense wasted on a country that typical played a direct game with heavy running.

Nevertheless, Lucas was starting to come into his own after the departure of Xabi Alonso, and since then has grown to be recognised as one of Liverpool’s key players. His place as underappreciated midfielder didn’t go unfilled for long though, with the arrival of Jordan Henderson.

Unfortunate to arrive under Kenny Dalglish and Damien Comolli’s generally awful transfer dealings, Henderson was thrown in as another overpriced stats-based British signing. Although, unlike Stewart Downing and Andy Carroll, Henderson was actually pretty handy.

The main issue with how he was viewed is that the Henderson that turned heads at Sunderland played a different role to how he is used at Liverpool. While still the same player, under Steve Bruce Henderson was shunted out to the right of midfield, his natural preference for the middle giving them more of a footing there, but also given the task of setting up striker Asamoah Gyan with crosses. It was these crosses that more than likely earned him his move to Liverpool, as Comolli used chance creation statistics to identify suitable new signings for Dalglish.

Given Dalglish had previously had great success with Ray Houghton in a similar right-sided role, it was fair to assume Henderson would be carrying on from his time at Sunderland. Instead, he rarely got a go playing wider, more often staying central. In a side increasingly developed towards specialists and direct play, where exactly Henderson fitted in wasn’t clear, stuck into a withdrawn role where he was wasn’t able to venture forward unless playing alongside the similar Jonjo Shelvey.

Henderson is best suited to a role that typically doesn’t exist in English football: the shuttler. The closest type of player to the shuttler is a box-to-box midfielder, although Henderson doesn’t fit into the action-orientated, slide tackle at one end then score from range at the other image that moniker conjures, even though he operates in that same space. Defensively, a shuttler is less physical, relying more on positioning and pressure to win back the ball, and more passive offensively, knitting play together with simple one-twos and triangles rather than driving runs to support the attack. In some ways they are like registi but more mobile, yet you are unlikely to see them play many long raking passes – their game is focussed on a simplicity that can make it look like anyone could do the job, which generally doesn’t sit well with fans. Still, Lucas was a shuttler in Brazil, and the fans have eventually warmed to him, could Henderson follow in his footsteps?

Although they have shared similar circumstances, Lucas’ progress probably isn’t the best comparison for Henderson. While he arrived in England as a box-to-box player, the Brazilian has been moulded into a holding midfielder and his popularity has more to do with his strong tackling since he’s bulked up than an appreciation of the subtler facets of his game.

Nevertheless, Dalglish being replaced by Brendan Rodgers should do Henderson some good. Rodgers didn’t appear too convinced by him at first, but he’s gained a more solid place in the team as the season has gone on, which should benefit them both: Henderson is, in theory, the perfect type of player for the pass-and-move style of play Rodgers is looking to implement. However, at a time where Liverpool aren’t particularly good, Henderson’s shuttling could be seen as superfluous. If everyone was just endlessly playing simple balls, the team wouldn’t get anywhere – there would be no one to act like the stereotypical English box-to-box midfielder and hammer the ball home. A player like Henderson, while still probably underappreciated, performs best when they are acting as the easy link between high quality players – they may rarely contribute to the headlines, but they keep the play flowing.

For the time being, Henderson’s main contribution to the Liverpool midfield is energy. He may have caught viewers’ eyes with his superb goal against Arsenal, yet he had already been Liverpool’s star performer beforehand, squeezing Arsenal out of the game in front of the less mobile pairing of Lucas and Steven Gerrard. Being the designated water carrier may not be the ideal job for Henderson, but it is a necessary one that pretty much guarantees him a place when his simple play will not. Overpriced he may have been, but there are far more deserving targets for derision in the Liverpool squad.

One thought on “What does Jordan Henderson bring to Liverpool?”