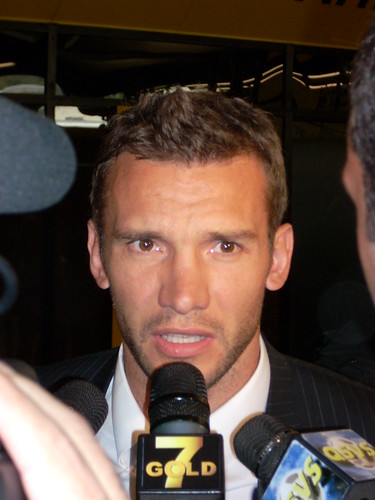 Ukraine’s opening game of Euro 2012 against Sweden was the perfect send-off for Andriy Shevchenko. Before the game Shevchenko was talked about, yet it was mostly backhanded discussion – he was one of few recognisable names on the Ukrainian roster, but debate was more about whether or not he would complete the 90 minutes than if he would pose a danger.

A perfectly timed run to meet Andriy Yarmolenko’s cross ahead of Olof Mellberg and a flawlessly placed header from a narrow angle gave Ukraine their win, and Shevchenko his fairy tale. Even the most cold-hearted of people couldn’t help but be pleased to see the joy of the doe-eyed man who had become increasingly forlorn as his career drew to a close.

The goals were classic Sheva: the intelligence of his run, the accuracy of his shot regardless of whether it came from his right foot, left foot or head. Still, there were elements of his game he simply didn’t possess anymore. At his peak, Shevchenko was a one-man frontline. His footballing brain and finishing made him a lethal goalscorer, yet he was equally capable of making runs to open up space for and link with his teammates, often very unselfish in his play. The most noticeable attribute he lost was his pace and, with it, his dribbling ability – he would regularly use his speed to burst past defenders and his ball control allowed him to work his way into the perfect angle for a shot, although he wasn’t beneath the occasional wondergoal from an obscure angle. Add to this, a penchant for free-kicks and you have some sort of unholy super-forward. He was the complete striker, and for this he thanks Valery Lobanovsky.

In January 1997, Lobanovsky returned to the club he had built into the finest of the Soviet Union using the universal principles of Total Football. Fitting in with the communist ideals, Lobanovsky’s side shared attacking and defensive duties in a fluid and attractive side. Dynamo had continued to dominate domestically in the newly independent Ukraine, yet their success on the continent suffered without him, culminating in a ban for attempting to bribe an official in a Champions League qualifier.

Shevchenko had already established himself as a good player before Lobanovsky arrived, scoring 24 goals the previous season, but the high demands of Lobanovsky developed him into one of the most well-rounded attackers in the world. Partnered by Sergei Rebrov, he took Europe by storm, scoring a hat-trick against Barcelona at the Nou Camp to top the group before losing in the quarter-finals to finalists Juventus. The next season Dynamo made it to the semi-finals, topping their group again and beating holders Real Madrid, with Shevchenko finishing as joint-top scorer.

Sheva had certainly caught people’s attention and AC Milan were happy to part with a record $25million to poach him from Kyiv. Typically, Dynamo players had flopped once they left the tutelage of Lobanovsky and Serie A was a famously difficult league to adapt to, but Shevchenko adapted immediately. He became only the sixth foreign player to top the Serie A scoring chart in his debut season with 24 goals and managed the same total the year after. Injuries limited him for the next two years as Milan schemed their way to the 2003 Champions League crown, Shevchenko scoring the winning penalty in the shootout and placing his winners medal at the grave of Lobanovsky, who had died the year before.

The Serie A title made its way back to Milan the following season, Shevchenko finishing as top scorer with 24 goals again. The Ukrainian’s masterful displays won him the 2004 Ballon d’Or – he had slowed down in Italy, Milan’s use of a personal trainer bulking him out to contend with Serie A’s more intimidating defenders, while his footballing brain was honed in the tougher league. The 2004-05 season ended with a Champions League final loss to Liverpool – Shevchenko the most notable victim of Jerzy Dudek’s incredible double save and wobbly legs – nonetheless it was another good season for Shevchenko, as was the following one, managing 17 then 19 goals despite niggling injuries. That summer he captained Ukraine in their first tournament as an independent nation: the 2006 World Cup, where they toiled their way to a quarter-final loss against winners Italy – very good for a nation still finding its feet on the world stage.

It was time for Shevchenko to move on. He had hit his peak quite early and managed to sustain it for an incredibly long time, on his way to a place in the footballing pantheon, so Roman Abramovich wanted in. The Chelsea owner had understandably been a long-term admirer of Shevchenko and had decided the season before the Ukrainian was by far the best option to spearhead the attacking side he wanted his Chelsea to be. Milan were reluctant to let him go, but Abramovich’s persistence wore them down and he eventually moved to London for an English record Â£30.8million.

Hype went into overdrive, everyone excited at Chelsea’s new signing, yet it quickly became clear Shevchenko wasn’t up to the task. Everything seemed to go wrong for Sheva all at once: at 29, he was too old to really be adapting to a new league, particularly one that depended so much on physical abilities just as he was starting to lose them, and the niggling injuries had now become chronic, effecting him to the extent that at times it hurt to walk. He wasn’t bad, he just wasn’t particularly special either. Jose Mourinho was unimpressed, but Abramovich had put so much effort into getting him the manager had to play him, leaving Shevchenko as the bad guy.

After two disappointing seasons, Shevchenko returned to his adopted home in Milan on a year long loan to little success. He returned briefly to Chelsea, only to be pushed out the back door to his original home at Dynamo. A minor rekindling of form in a less demanding league let him prepare for Euro 2012, allowing a national hero to play another part in Ukraine’s progress as an independent country.

His body could no longer handle playing three games in a week but, with those goals against Sweden, the fear of Shevchenko seemed to come back. Pundits pointed him out as a legitimate dangerman rather than “that guy who used to be good”, his quick thinking making up for his slowing body. It was a fitting send-off for Sheva, whose place in footballing history has been tainted by an unfortunate end. A few things done differently and his place as an all-time great would be undisputed.