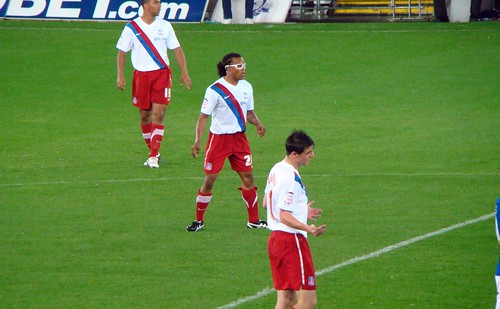 By Piers Barber
Last weekâ€™s Mathieu Flamini-inspired â€˜sleevegateâ€™ controversy provoked outrage amongst Arsenalâ€™s management team and hilarity amongst pretty much everyone else. But how do the midfielderâ€™s antics compare to other stylistic kit adaptations made by those players with the most blatant disregard for footballing conventions? Here are ten of the best.

1) Tevez’s dummy
Carlos Tevez celebrated scoring a winning goal for Manchester United against Birmingham in 2008 by popping a babyâ€™s dummy into his mouth and grinning manically. According to the man himself, the celebration was intended as a tribute to his daughter in Argentina. Either that, or as a nod to his own persistent tendency to throw his toys out of the pram.

2) Rooney’s Everton love letter
Although the â€œmessage-on-a-t-shirt-under-the-shirtâ€ celebration is a tried and tested kit customisation, it is one which can occasionally come back to bite you, as Wayne Rooney can ably testify. After scoring against Aston Villa during Evertonâ€™s run to the FA Youth Cup final in 2002, Englandâ€™s brightest hope revealed a hand-written t-shirt reading â€œOnce a blue, always a blueâ€. Just a few years later, photos of Rooney kissing the Manchester United crest would be adorning the covers of newspapers and magazines worldwide.

3) Pennant’s prison tag
Sometimes the most hilarious accessories are those over which the player has no control. The finest victim of this affliction was Englandâ€™s notorious badboy Jermaine Pennant, who was forced to play wearing an electronic tag after being convicted of a drink-driving charge during his time at Birmingham City in 2005.

4) Neymar’s Neymar mask
Current Barcelona forward Neymar went to impressive new lengths to demonstrate his monstrous self-confidence by pulling out a mask of his own face after scoring an incredible solo goal for Santos in 2011. The Brazilian wonderkid was booked for his hilarious celebration, and later received his full marching orders after committing a nasty mistimed tackle.

5) Sava’s Zorro mask
Fulhamâ€™s Â£2 million striker Facundo Sava became infamous in England for the dire zorro mask he pulled out and put on each time he scored. With just 6 goals in 27 appearances for the Cottagers, opportunities to expose his embarrassing celebration to the world were thankfully rather limited.

6) Davids’ goggles
Davidsâ€™ protective eyewear has gone down as an enduring memory of the 1990s and early 2000s. Originally worn following surgery on his right eye, the goggles quickly became synonymous with the former Ajax and Juventus midfielder, surely prompting a few hefty marketing returns in the process.

7) Bendtner’s pants
Footballâ€™s most inappropriately self-assured striker got himself into all sorts of trouble for revealing a pair of Paddy Power-branded underpants after scoring against Portugal during Euro 2012. The Danish striker was fined a hefty Â£80,000 for his troubles.

8) JonÃ¡s GutiÃ©rrezâ€™s Spiderman mask
Newcastleâ€™s wacky winger acquired the nickname â€˜Spidermanâ€™ for his penchant of donning the mask of his favourite superhero every time he scored. â€œI donâ€™t know how long the mask has been down there, but it did not smell very nice when I put it on,â€ he revealed after notching his sideâ€™s fourth goal in an FA Cup tie with Barnsley.

9) Vieira’s vapour rub
Patrick Vieira led the trend amongst his Arsenal colleagues of lumping a load of vapour rub onto the centre of his shirt before each match. Much like Robbie Fowlerâ€™s nasal strip, the technique supposedly enabled players to breathe easier, but it quickly became a rather messy superstition, frequently resembling a particularly clumsy attempt to eat a very greasy dinner.

10) KirÃ¡ly’s trackie bottoms
Best known in England for his spells in goal for Crystal Palace, error-prone keeper GÃ¡bor KirÃ¡ly quickly became renowned for the baggy grey tracksuit bottoms he elected to ruin with grass stains each week between the sticks. KirÃ¡ly lasted less than five years in England before he was shipped off (along with his trackie bottoms) back to Germany.

Piers is a Manchester United fan who writes regularly for Dream Team Fantasy Football. You can follow him on Twitter.