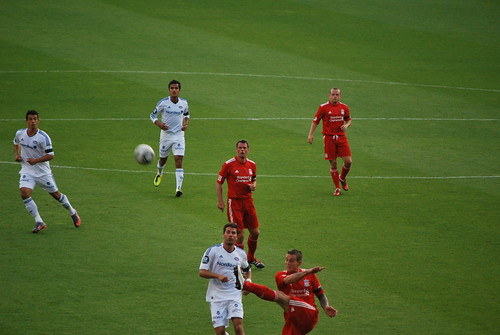 A lot has been written in the last few days about Liverpool following their dour 0-0 draw with Swansea at Anfield and although a lot of it is rash, there is fairness in several gripes aimed at the club and at Kenny Dalglish and the back room staff. After all, there hasÂ been a lack of control in a vast proportion of Liverpool’s games this season,Â there areÂ question marks over the majority of the summer signings and there is definitely a sense of something being wrong, be it tactically or with the players themselves.

There is a sense that there areÂ two parallel narratives running for Liverpool this year, the season that could be and the season that is. Fans are lamenting both the lack of concentration defensively as well as the lack ofÂ clinicalÂ finishing from the front line. In games like Norwich, Swansea, Manchester United, Sunderland and Stoke both of these issues have been evident to varying degrees and this is playing into the idea of the second narrative: had we not hit the woodwork so much, had we not had lapses at the back, had we taken one or two more chances then Liverpool would be higher in the table, with a higher points count, and at the end of the day, that is the best barometer for a club, isn’t it? The problem is, however, that ostensibly these what ifs don’t negate the glaringÂ deficienciesÂ that have plagued Liverpool since the opening day and only serve to partially cover them up as well as causing frustration in the fanbase, who have only seen the team comfortably win against teams with ten men (Everton and Arsenal) or against teams that have been dire (Bolton and West Brom).

One of the key problems that has beenÂ prevalent has been a lack of balance in the side, something which had been one of the strongest assets in the performances that the side put in at the end of last season.Â In some quarters one of the biggest failings of previous regimes was the insistence of using two defensive midfielders, which was considered too defensive and reactionary rather than being pro-active and trying to dominate games, as it were. Many welcomed the idea of using 4-4-2 with Luis Suarez and Andy Carroll as a forward pairing as a return to the halcyon days of Dalglish’s previous reign, seeing two forwards as better offensively than the mechanical 4-2-3-1 used before. The problem with this, however, is that two defensive midfielders isn’t necessarily bad offensively, and two forwards aren’t necessarily good offensively. It is entirely dependent on the players available and the style of the player you are trying to cultivate, and this leads onto the biggest question mark of Kenny Dalglish’s return to the club: why was the success of last year, and the players used, to a certain extent, considered not worth building on?

Although the formation was fluid and the style of play more dynamic than the club had seen in Â two decades, the main building blocks of the last season’s good form were: two players holding shape at the base of midfield and supporting play, occasionally moving forward to add an extra body in the final third, while a central defence of two or three held firm just behind. This allowed the full backs to provide width whilst four other attackers could change shape and get at the opposition defence. Not only did it flood the squad with confidence following the squalor and dearth of ideas that was so synonymous with Roy Hodgson, but it also showed a tactical nous and fluidity that had long been yearned for.

Move forward to this season and the addition of: Charlie Adam; Jordan Henderson; Jose Enrique; Stewart Downing; Sebastian Coates and Craig Bellamy seemed to give the club the most balanced, competitive squad it has had for years. Combine this with the sale of much of the deadwood that still hung around from previous managers – and Raul Meireles and Alberto Aquilani, which I’ll address later – meant that there was a sense of optimism going into the new season. So how did we come to be 11 games in and much of that good will has dissipated?

Defensively (and this isn’t counting the potential of Sebastian Coates or the injury plagued Daniel Agger), there’s been growing discontent with Jamie Carragher and Martin Skrtel for goals being conceded that areÂ perceivedÂ to have been avoidable. Carragher in particular has had the accusation of dragging the defensive line too deep levied at him, whilst Skrtel is considered too weak, physically and aerially, to deal with opposition centre forwards and is seen as a weak link. There is truth in both of these complaints, but to suggest that they are the only reasons why Liverpool have looked weaker at the back is too simplistic. Both players have characteristics that, when utilised correctly, mean they can – as they have before – operate in an effective defence. Carragher is a fantastic organiser and although he is in the twilight years of his career, can offer something not many other defenders can in his altruistic nature, a leader on the pitch who’ll give 100% consistently. Although Skrtel doesn’t have many distinguishing features (he isn’t particularly quick, strong or dominant in the air) he is a well-rounded centre-back who is adept in most situations, but operates better in a side that dominates possession and allows him to hold a high line, but as implied before, could see himself as fourth choice by the end of the season, and as far as fourth choice centre-backs go, they don’t get much better.

The defensive frailty that has become more apparent through the season, contrary to blaming several players, is instead more easily explained by what seems to be the managements decision to trade control for, theoretically, a more attacking side. The addition of Charlie Adam, rather than a Yann M’Vila, seems to indicate that Dalglish thinks the club needed someone who could provide an impetus from midfield when Steven Gerrard isn’t fit rather than having a solid central midfield that could soak up and distribute to more creative players. Indeed, the use and extent of importance afforded to Charlie Adam could well prove to be the defining part of Liverpool’s season.

Adam’s attributes and characteristics have been much discussed, applauded and maligned, and although he does have evident qualities it is debatable whether they out-weight the detriment to the balance of the side he causes by his lack of pace and awareness. Although he’s been compared in some quarters to Xabi Alonso, Adam isn’t remotely as able defensively and is too eager to push forward and press the ball at inopportune moments, leaving space in behind. Another problem he poses is his tendency to try and make the play rather than support it. Although he is capable of playing great passes he regularly chooses the harder option and tries to force the play rather than trying to manipulate the opposition and create a platform to build from, thus conceding the territory regularly. This also puts a lot more weight onto the shoulders of Lucas Leiva, who is often left to shield the whole back four, meaning he can be regularly bypassed.

One of the other big problems has been that although Liverpool are fielding more offensive XIs and trying to dominate games, they’re not scoring as freely as they did at the end of last season. This has been attributed to various different factors, with the main reason being the accepted logic of a lack of clinical finishing and a lack of luck. It is difficult to argue with this in some games, particularly against Norwich where Liverpool could have easily been 4-0 up by half time, but one of the main problems has been the that the chances being created, on the most part, aren’t the easiest (aside from a few obvious exceptions) and regularly come through the same channels, usually a piece of magic from Luis Suarez. An absence of fluidity has been readily apparent, players more readily stick to their positions on the pitch rather than look for space.

With this in mind there’s a few decisions that have been made that seem strange. Firstly, the consistentÂ omissionÂ of Maxi Rodriguez from league games when he’s not only one of the best finishers in the squad, but also one of the most intelligent with his movement and economy of possession, particularly with the addition of Jose Enrique who can provide width on the left hand flank. Secondly, the sale of Raul Meireles and loaning of Alberto Aquilani – although this can be considered to have been a financial decision, rather than a footballing one – when they are both players with proven pedigree on the continent and showed flashes of brilliance in their first seasons at the club. Their dynamism and ability to keep the ball and build attacks, as well as finish them – with Meireles, in particular – is something that many would consider a necessity this season. In the long term it can be considered that they were traded for the bright future of Jordan Henderson and, should he reach his potential in a functioning side, Charlie Adam, but for this season it seems like they are two players who will be sorely missed.

It is still very early days in Dalglish’s second reign at the club, and he will, rightly, be afforded the luxury of time and patience from the fans and board, although there is a growing concern among supporters that the team still look no closer to finding the balance they’re desperately striving for, Dalglish will rightly be given time to remedy that. In the mean time, fans should try and remember where the club was 12 months ago before being too gung-ho in their complaints, and at the bare minimum afford Kenny Dalglish theÂ courtesyÂ of spelling his name correctly.