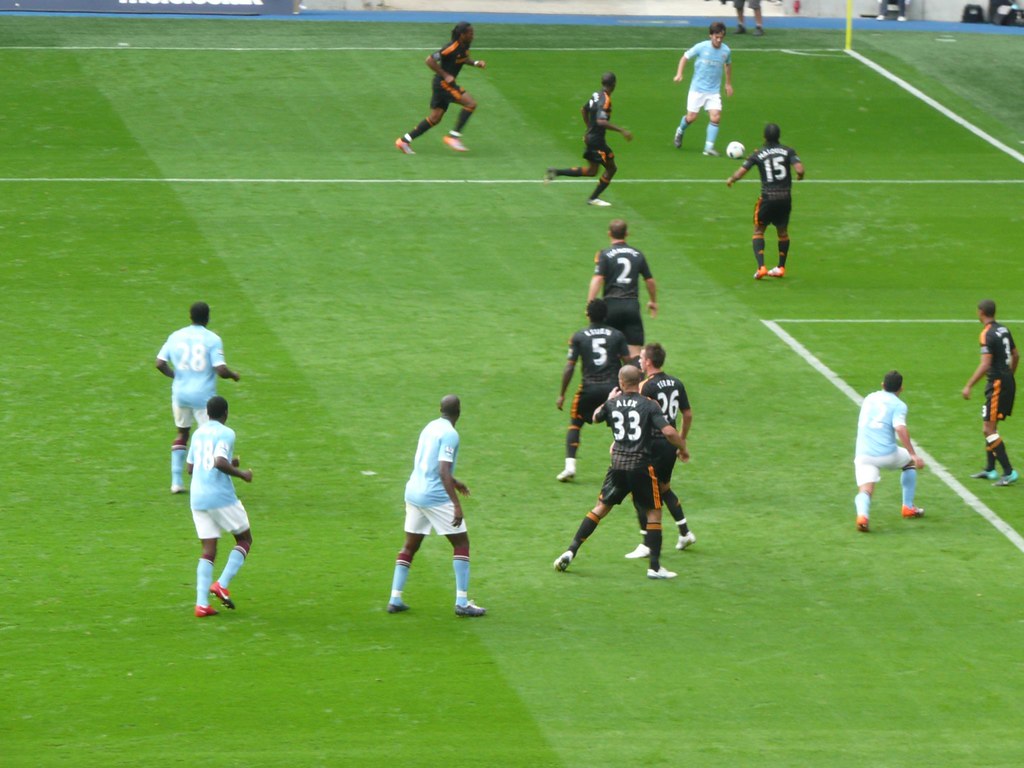 Oh, hello again, welcome to part two, where rather than pontificating on the English game, I’ll (try to) discuss the merits of the division in midfield. Welcome to me trying to know about tactics.

Jonathan Wilson’s prediction for a reactive change in tactics hasn’t been, arguably, entirely accurate so far this season. In England, particularly, the 4-4-2 hasn’t completelyÂ disappearedÂ as many predicted following a World Cup where the 4-2-3-1 was the main formation used. Indeed, it could be argued that the teams who have experienced a great deal of success (when expected not to) have been teams who have utilised a completely different formation to the 4-2-3-1. Â Napoli have had their best season in years using a 3-4-2-1, PSG are second in Ligue 1 using a 4-4-2, Roberto Mancini uses a fluid 4-2-1-2-1 at Manchester City and Villarreal are the best non-Barcelona or Real Madrid side in La Liga and utilise a 4-4-2.

Of course, I have already said in the previous part to this article that a mass homogenisation of tactics isn’t likely and the point of Wilson’s article was that teams are likely to become more reactive, or specifically, it was likely in England. But this season so far has been notable for an increased number in high scoring games.

But the crux of Wilson’s point is that the 4-2-3-1 offers flexibility. Lesser teams retain solidity with two defensive midfielders, whereas other teams can form an important attacking quartet and have players who can back up play and break up any opposition attacks, and with its popularity and success in European football and the World Cup, it did seem like this season would see a major transition in tactics. But, for reasons that could be debated endlessly – some of which I have gone over in the post previous to this – this hasn’t been the case.

One of the reasons for this is the fact that the 4-2-3-1 isn’t generally a formation that lends itself to long ball teams unless you have a high quality target man who isÂ combativeÂ and agile enough to hold the ball up. The reason for this is that, for the most part, long balls towards a lone forward have to be precise,Â particularlyÂ should he be up against a centre back pairing, so he can control them. If the team doesn’t have a good enough distributor from the back then the forward will generally only serve the purpose of knocking the ball on to nobody.

The other reason the 4-2-3-1 lends itself more to possession based football is that, if you play with a deep lying defence, there’s a tendency for the bands of 2 and 3 to be far apart on the pitch, meaning there’s a vacuum of space for players to inhabit and thus dominate the midfield, causing the – supposedly – offensive 3 to drop deeper and isolate the forward even more. This suits teams who are looking to play reactive football and have a massed defence that is hard to break down, but for obvious reasons makes it very difficult for said team to create much going forward. Unless you play a percentage-based game and try and win set pieces and then try to pack the box.

One way to combat the top-heaviness of a side using the 4-2-3-1 is by playing a high line and trying to dominate possession. The simplest example of this is Benitez’s Liverpool side. Playing a pressing game high up the pitch and retaining the ball meant that teams very rarely, when the side was at its best, managed to dominate them. Constricting the space allowed Liverpool to flood the midfield and put pressure on opposition defences to try and work their way out or they would find themselves having to hit aimless long balls. In other environments the formation was also used as a defensive mechanism. For instance, when playing in big European games the team were drilled to try and press out as much as possible so to constrict space for the opposition, or failing that to saturate and protect their final third and play on the counter attack, with goalkeeper Pepe Reina’s distribution second to none.

The rise to prominence of the W shape of midfield has been aÂ continentalÂ phenomenon and I can’t profess to have a long standing tactical knowledge of the game in Europe, ergo I can’t really detail its genesis. But certainly in the English game its main introduction came through Arsene Wenger and Rafa Benitez, who both used the system in different ways, but were certainly a couple of the first managers to use it at the highest level of English football.

Regardless of the genesis of the formation, the main tactical trend of note of the last few years is that tri-band formations are becoming obsolete. Even teams who still utilise variations of the 4-4-2 will have one or two players who play between the lines, either offensively or defensively, adaptation is happening rapidly and whether or not the 4-4-2 will survive as a long running concern in modern football is questionable.Â The pitch is, in essence, too big for only 3 bands, players are too good offensively to allow the premium of space between defence and midfield, and with the offside rule the way it is, it’s too risky aÂ strategyÂ to rely solely on your defence to push out and deal with the problem.

As well as this, playmakers have changed, they are no longer players with no agility who swan around the pitch playing through balls, they are dynamic and have adapted to the pace and physicality of modern day football, meaning systems have had to change to counter-act them. Offensively, football is based entirely around the generation of space through movement and pressure, and with the currentÂ predilectionÂ for sole striker systems rather than having two forwards who use their movement in tandem to create space in a back line, the role of the defensive midfielder has never been more important.Â Stymieing the creative force of a side is the most vital part of defending and it is in the 30 yards or so from the edge of the penalty box to the half way line that this battle is fought.

The importance of utilising this space means that many coaches, like Luciano Spalletti – who himself has used a striker-less formation at Roma – and Carlos Alberto Parreira have predicted a future where teams don’t play with centre forwards, instead having players attacking from deep, thus negating the traditional role of the defence to man mark. Instead, defenders will have to become more like chess players, trying to anticipate the attackers usage of space and intercept these attacks. Of course, beyond a handful of teams, this is all still existing primarily in abstract theory. After all, the transitions in players and their learning take generations, but it is difficult to deny that managers and coaches may well revert to these types of tactics in their search for space as teams utilise and perfect the roles of defensive midfielders. After all, if the defensive midfielder continues its current ascent then coaches will have to find a way to negate them as they have traditional central defences.