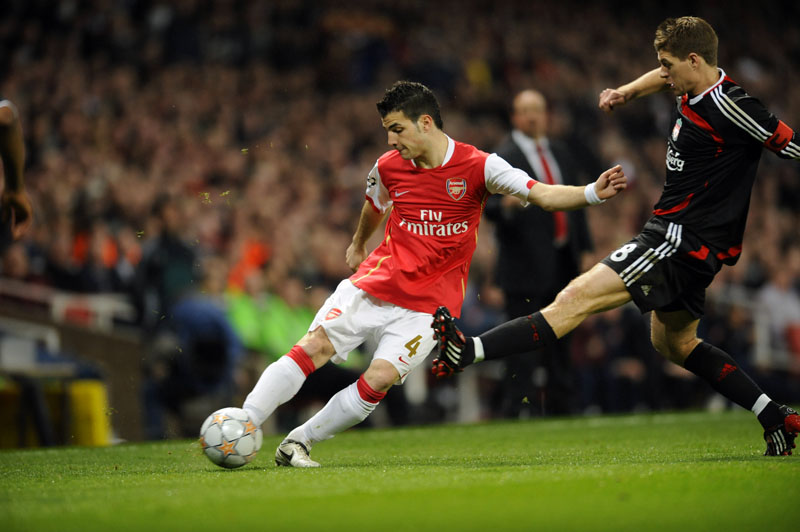 Ok, I went a bit mad with this idea, so I’m dividing the article about dividing midfields into two pieces, howÂ continentalÂ of me, no? Consider this Episode One: The English Way.

Although this site has already had a Nostradamus-esque stab at predicting future tactical trends, it is difficult to determine any currently in vogue. For every 4-2-3-1 that’s prevalent, there’s the success of Tottenham Hotspur and Manchester United – who both ostensibly use a strict 4-4-2 – and for every Sky pundit who labels the use of two defensive midfielders as intrinsically negative, there’s Arsenal utilising Jack Wilshere as a deep-lying playmaker-cum-defensive midfielder and Alex Song, who has been re-born as a box-to-box midfielder. However, that is not to say that the last few years haven’t shown a general seismic tactical shift, with the main one being the division in midfield.

The obvious point to be made is that football in itself is such a fluid and divided game that there will never be a mass-homogenisation tactically, nor will there ever likely to be the level of tactical invention as there has been before. But that’s not to say that changes don’t occur, nor that other clubs won’t ape these changes. Of these changes, there has certainly been a rise to prominence of a divided central midfield.

It can be argued that, aside from the generic nomenclature, the 4-2-3-1 is nothing more than a fancy Dan version of the 4-5-1, which has existed as a defensive alternative to the 4-4-2 for a long time. And it’s precisely this argument that is used to support the, very English, ethos that having two defensive minded central/defensive midfielders as being completely and utterly negative and somehow wrong.

The failure to recognise the significance of the shift in midfield positioning, thus the evolution of modern European football, could be considered to be both symptomatic of the English problem as well as a root cause. Tactical variation has never really been, aside from a few notable exceptions, a very English thing. It’s always been deemed that spirit and physicality is more important than the abstract nature of the game. An almost reckless disregard for “Continental” football has always been synonymous with the vast majority of British media and managers. Obviously there’s validity to some of their arguments, after all footballers aren’t a group of automatons and it’s not like English football hasn’t been successful. It has. But, the architects behind these successes have, generally, always underlined motivation and man management with tactical astuteness.

The mainÂ proprietorÂ of ‘English Success’ in modern football is Harry Redknapp, the man with a thousand transfers up his sleeve and aÂ wilfulÂ disregard of a fair proportion of abstract theory. The man, who, with Sir Alex Ferguson – although more on that later -Â  has his team play a direct 4-4-2 with flying wingers and no intention to change for defensive solidity. However, Redknapp’s tactics have slightly shifted this season with the addition Â andÂ accommodationÂ of Rafael van der Vaart to create somethingÂ resemblingÂ a 4-4-1-1 with Van der Vaart being the man to facilitate, and often finish, moves. However, it would be wrong to consider that the Dutch international, though playing in the space between midfield and attack, Â a veryÂ archetypal attacking midfielder, playing more like a deep lying forward. Tottenham, in effect, are playing in a similar offensive style to how Arsenal operated with fellow Dutch star Dennis Bergkamp (though don’t say that too loudly) in the late 90s.

The quintessential reason for Redknapp’s reverence for the job he has done at Tottenham, who have had a very expensive squad assembled in the last few years, is that he got them to break into the ‘Top Four’ that had existed withoutÂ disturbanceÂ for the latter half of the decade. This is something of a misnomer, however, inasmuch as Tottenham’s ascendancy has been probably only comparable to that of Manchester City following Liverpool’s internal troubles and, this season, Chelsea undergoing a difficult transition. Which isn’t to say it isn’t a feat, but it’s perhaps not as grandiose one as has been said. 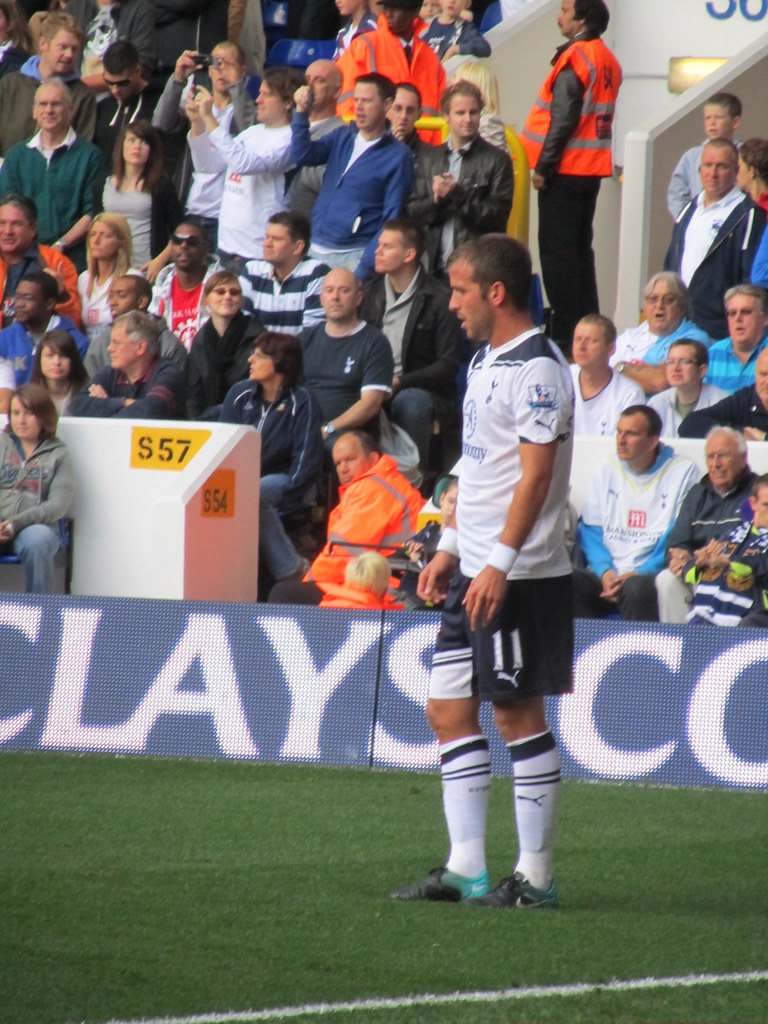 Whether or not Redknapp and Tottenham will be able to experience a prolonged period of success is open to debate, after all the Premiership hasn’t been of the highest quality this season. Couple this with the fact that their, thoughÂ admittedlyÂ somewhat impressive, Champions League run was helped by the fact that the teams in their group perhaps weren’t at their strongest,Â comparatively to previous seasonsÂ anyway and it could be that they come crashing back down in the next 6-12 months. Regardless, however, it is very unlikely that this will matter in the eyes of many of the English footballing gentry, because they have done it this season and did it in the idiosyncratic English way, that conquers all.

But it seems that the primary focus of this lauding is not that Redknapp not only accomplished this, but he accomplished it at the expensive of two European tacticians who have been oft derided for their negative football. Roberto Mancini and Rafael Benitez, although very different characters who play very different football, are lumped into the same sum of ‘Other’ and, beyond their own fans, not many people in the mainstream media have bothered to give any credit to the two, but instead only stating that which they have not achieved, which is completely contrary to the compliments extended to make-good English managers.

Meanwhile, the only team left unbeaten so far this season is Manchester United, but whether or not this is entirely down to Manchester United is difficult to tell. As aforementioned, this season has possibly been the weakest, in terms of quality, in the last 10 years or so.

Tactically, aside from the games against the higher quality opposition in the Premiership, Ferguson has reverted to the tactics that served him so well in the 90s. Without theÂ ascendancy (as of yet, anyway)Â of another golden generation for him, Ferguson has instead played to the strengths of his old hands and tactics that have revitalised one of their most important players this season: Luis Nani. The emphasis so far this season has been a combination of a workmanlike midfielder with a metronomic one, with much of the attacking intent coming from the quartet of wingers and forwards,Â supplementedÂ by attacking full backs.

The primary reason as to why this case is different to Spurs is that Ferguson has shown, on many different occasions, a willingness to change and embrace new ideas,Â particularlyÂ during Carlos Queiroz’s tenure as his assistant and has been very successful in doing so. But that’s not to deny the fact that the 4-4-2 has found a place in amongst the European elite through United, although their remains the underlying feeling that, certainly on the domestic front, United have not found anything close to the form that was once synonymous with the club. United’s success this season seems to be almost down to a psychological power they exude over the competition, and Chelsea’s spectacular discombobulation, rather than through any particular player shining or tactical dominance over the league.

With much of the country lamenting the lack of advancement on the international stage as well as a constant media-sponsoredÂ derision of any tactical development brought by a foreign coach, it is unlikely that their will ever be an embracing of the supposed ‘defensive’ changes that are currently sweeping through Europe. But England, much like after being destroyed by Hungary in the 50s, must realise that there is much to learn in order to improve, otherwise they will just see their domestic clubs successful when taken over by foreign coaches or one certain Scot.