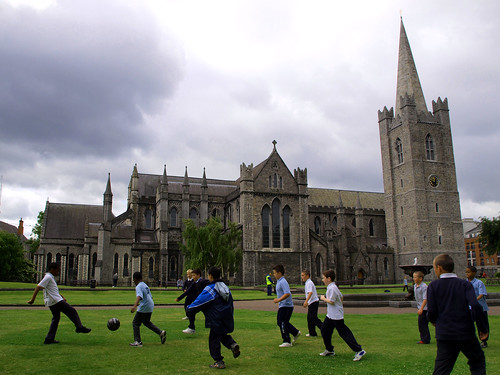 Remember the last time Louis van Gaal was in charge of the Netherlands and didn’t qualify for the World Cup despite having Edgar Davids, Edwin van der Sar, Jaap Stam, Marc Overmars, Patrick Kluivert and Phillip Cocu, finishing four points behind an Irish side managed by Mick McCarthy, who then went on to break the record for the lowest points total in his next job at Sunderland? Holding Midfield remembers, so allow us to relive one of Ireland’s finest World Cup moments.

The year was 2002, and the tournament was terrible. Like proper awful. And there’s a decent chance a few of the games were fixed. Regardless, still not out of primary school, I lacked the perspective to appreciate this. What the tournament lacked in quality play, it made up for in dramatic moments to capture the imagination of any new audience.

Ever the borderline psychopath, Roy Keane had little time for this laissez-faire attitude towards football. Football is a game of pain and hardship and Ireland’s base in Saipan didn’t look enough like a medieval torture chamber for Keane – Ireland’s sole world class player left the squad, leaving only a scathing criticism of McCarthy and his set-up behind. Having largely relied on Keane’s performances through qualifying, it was shaping up to be a disappointing summer for the Irish. The kind of tournament that would need Sports Betting Pal. 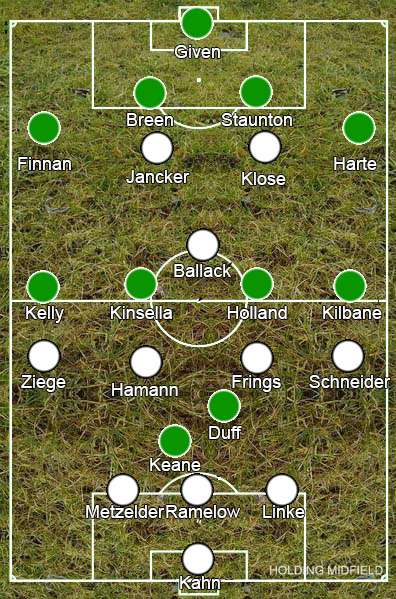 Following a 1-1 draw against their main rivals Cameroon, Ireland were left in the awkward predicament of probably needing something from their game against group favourites Germany to progress. Cameroon had only narrowly beaten Saudi Arabia 1-0 as Ireland were preparing for the Germany game, but, should they beat Ireland, Germany wouldn’t need to put up much of a fight in their final game against the Africans. To sneak past Cameroon, Ireland would have to snatch something from Germany.

Much like his predecessor Jack Charlton, Mick McCarthy’s gameplan for Ireland rested on rigid and organised defending, setting up in a 4-4-2 with Damien Duff floating off frontman Robbie Keane, Mark Kinsella replacing Roy Keane next to Matt Holland in midfield and farmhand lookalike Steve Staunton claiming the captain’s armband for his 100th cap. The simple strategy may have leant to some of the success for a squad primarily made up of mid-table Premier League players, yet it limited any potential flair from Ireland’s handful of more talented players and was the worst possible formation to go against Germany’s 3-5-2.

Keane and Duff were sufficiently covered by Germany’s back three, while Dietmar Hamann and Torsten Frings could pick up the Blackburn Rovers winger when he drifted away from Keane, also outnumbering Kinsella and Holland with Michael Ballack at the tip of their midfield triangle, while Miroslav Klose and Carsten Jancker found themselves in two versus two situations against Staunton and Gary Breen that led to mild panic in the Irish defence whenever they hit the ball forward quickly. Their only weakness was of possible being overloaded on the wings, but Ireland would generally just hit long balls towards the strikers whenever they won possession for one of the German defenders to step forward and calmly cut out. 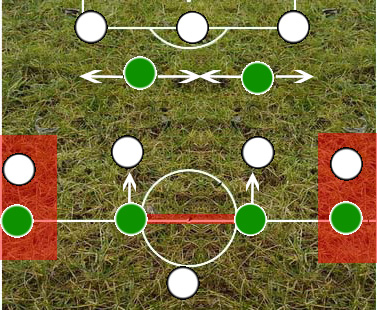 Early on, Ireland had some success by pushing up against Germany’s midfield before they could squeeze it forward. The wing-backs would be closely watched by the Irish wingers, or full-backs had they ventured further forward, while the German centre-backs’ consistent failure to spread out meant they couldn’t pass it back to them without landing one of them in hot water with the energetic Keane and Duff bearing down on them, and the passing angle to the third midfielder typically cut out, leading Ballack’s first noticeable contribution to be a horrific spooned pass out of play.

Strangely, it was out wide, where Ireland were most protected, that Germany found most fruitful in the opening stages. A quick switch of play gave Bernd Schneider the space to whip in a cross for a strong Jancker header, but it was for the most part Klose’s movement out towards Ian Harte that was giving Ireland problems. A wonderful dummy that almost allowed him to snatch a cross at the byline set Irish hearts racing, and on 19 minutes the Polish-born striker punished them: Schneider passed to Ballack, who, with Ireland quickly retreating, had all the time in the world to drop a left-footed cross onto the penalty spot. Klose, having drifted wide away from Staunton, slipped between the captain and Harte for an uncontested header past Shay Given.

Ireland’s few bright sparks came from when the ball evaded the German defence and found Duff on either flank. They struggled to deal with Duff’s pace and direct running, but his crossing was another matter, with Jancker at the other end the forward better suited to this style of play than Keane. Keane was involved in another oft-repeated move where he would drop off and play a one touch pass into midfield, dragging the defensive line up with him, while Kevin Kilbane would go racing down the left onto the ball that had been played behind them. These were sparks at best however rather than fires, and it wasn’t until reasonably far into the second half that they even managed a shot on goal.

Ireland were getting into the game, but it was only because the Germans were sitting off and allowing the ball to be played in front of them. When an unmarked Ballack was able to slip a through ball to Jancker that really should have ended up nestled in the net, you got the impression that the Germans were perfectly happy with Ireland’s control. Immediately after this moment, McCarthy went about adapting his side, changing to what was broadly a 3-5-2 but with more and more Irish players heading forward in need of a goal it became increasingly top heavy. The important factor was who he brought on: along with Steven Reid and Kenny Cunningham, Niall Quinn entered the fray. With Duff and Keane two of the country’s standout talents, Quinn had no place in the starting line-up, but neither Duff nor Keane were particularly useful in a team that just looked to hit long balls forward. What Quinn lacked in footballing ability, he made up for within this context by being big and strong.

Ireland were now getting chances. They generally came from mad scrambles after a little mistake, but it was an important sign that the Germans were now making these mistakes as momentum ramped up in favour of the Irish. Nevertheless, Oliver Kahn was snatching ahead of every goal-bound ball, until Quinn flicked on a last gasp punt forward, Keane dashing between Carsten Ramelow and Thomas Linke to scrape past the imposing German captain. It was the exact kind of aerial ball that had gone uncontested by the comparatively lightweight front two previously, but Quinn meant the ball didn’t go flying back the opposite way. For all intents and purposes, Ireland had stolen a draw from a team far more competent than they were. Exactly what the 2002 World Cup was all about.