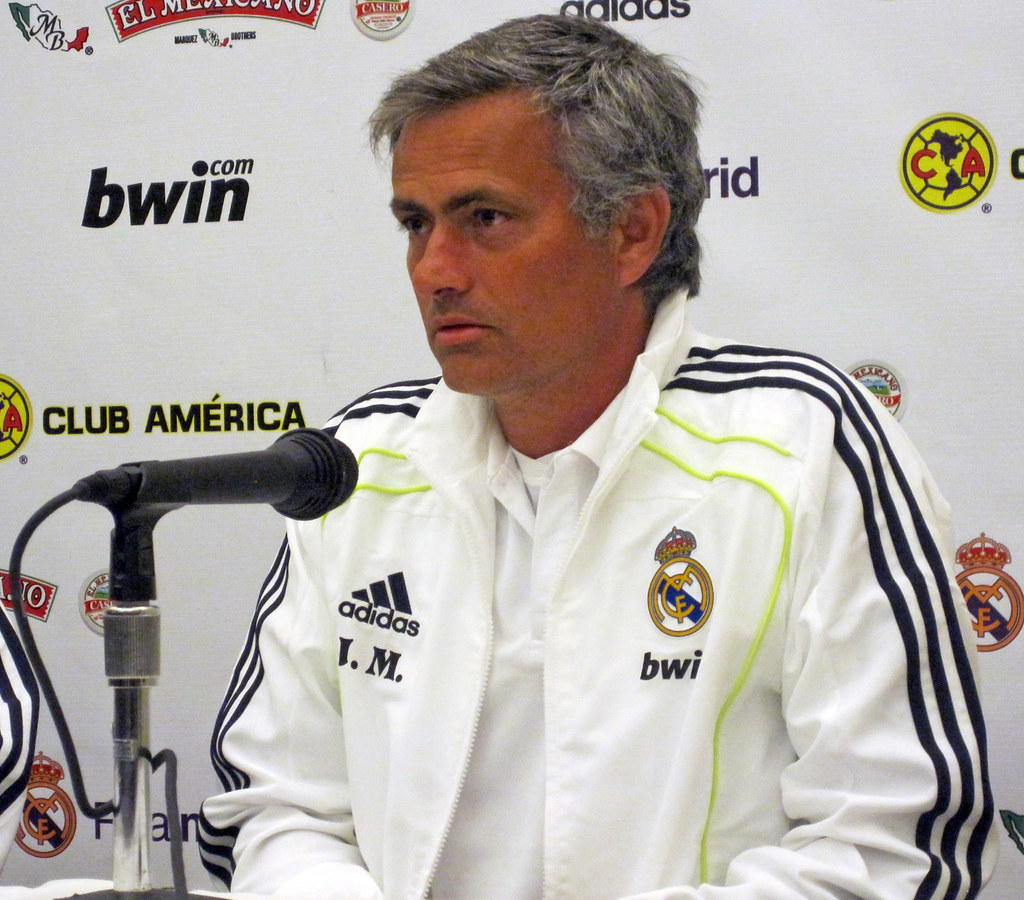 Plenty of people claimed that Barcelona’s incredible 5-0 El Clasico win over Real Madrid had little to do tactics, and they had a point: when teams go out with a similar gameplan, it comes down to who can execute it better, but saying that makes it sound as if the Catalans are untouchable. They aren’t, and their detested former translator Jose Mourinho has proven this.

Both Rubin Kazan and Hercules have done it better (even Inter’s first leg performance was better, since it was an actual win and fairly attack-minded), but for sheer tactical uniqueness Inter’s performance was one of the best of last year. With this in mind, you would expect Mourinho to go into his first Clasico with a similar tried and tested gameplan, instead we saw the polar opposite: a team lacking in the most basic of organisation with none of the discipline we have come to expect as a bare minimum from a Mourinho side.

Now the dust has settled we can look for where it went wrong for Real Madrid and the differences in style compared to Inter last year.

From the off, Inter had an advantage over Real Madrid by facing a severely weakened Barcelona team. There was no Andres Iniesta, Eric Abidal or Carles Puyol for the Catalans, replaced by Seydou Keita, Gabriel Milto and Yaya Toure respectively, each of whom is worse than their first team equivalent.

Inter set out in a kind of lopsided 4-2-3-1/4-3-2-1 formation, with Christian Chivu set up essentially as a wing-back ahead of left-back Javier Zanetti. The primary purpose of this was obviously to nullify the attacking threat of Dani Alves and it worked, you could probably count on one hand the times Alves threatened. It also had a secondary bonus as it allowed Inter to quickly double up on Lionel Messi (fig. 1).

With Messi unsuccessfully coming inside and Dani Alves shackled by Chivu, width was needed from the opposite flank. Pedro did a good job hugging the touchline early on and, within a few minutes of the kick-off, found himself with plenty of time and space to get a shot away despite Maicon running out to meet him.

Inter found a way of ensuring Pedro didn’t have as much space by pushing into a makeshift 3-4-3 shape (fig. 3). Barca’s movement meant they attempted to exploit the gap left behind Maicon (fig. 4), but Esteban Cambiasso communicated well, so Maicon knew exactly when to drop back (fig. 5), or the Argentinian would cover for him, either in this right-back position or up against Pedro. Cambiasso was also excellent at dropping back into the defence whenever one of Walter Samuel or Lucio was drawn up the pitch.

Once Pedro was stopped, the onus should have been on the left-back to provide width, but with natural centre-back Gabriel Milito stationed there that was unlikely to happen. This meant that Samuel Eto’o was rarely forced back and so was doing very little until Inter regained possession. Along with Diego Milito, he was often the target of Inter’s long balls forward, as Inter hoped to use his pace to get in behind the pushed up Barca defence.

Maxwell was brought on for Milito at half-time to remedy this, but by then Thiago Motta had been sent off and Inter’s wide players were tracking back anyway.

Seydou Keita was often left as a free man, as Thiago Motta and Cambiasso were often forced to cover other players. Eto’o was frequently in the vicinity of him and could have just dropped back goalside, but as Mourinho was still attempting to score at this point he didn’t. As Keita isn’t a good enough player to take advantage of this space effectively, it becomes something of an irrelevant point, but when bearing in mind he was the replacement of Iniesta, you have to wonder how Mourinho would have combated the diminutive Spaniard.

As it was he only had to stop one of Barcelona’s midfield playmakers, Xavi, and he did so by getting Wesley Sneijder to track him (fig. 6). If for any reason Sneijder leaves Xavi, another midfielder takes charge and attempts to squeeze him back into a tighter area (fig. 7 & 8).

The only other specific job anyone has is Diego Milito, who is tasked with stopping Sergio Busquets from getting the ball. Whenever one of the central defenders is on the ball, he will get in the way of their angle to Busquets (fig. 9 & 10) and should he get the ball he hounded down (fig. 11). By stopping this first ball out of defence, Milito eliminates the link between the midfield, forcing Xavi to come deeper to retrieve the ball (fig. 7) where he is less dangerous.

Each player knew what their jobs were and followed them to perfection; it was an incredibly disciplined performance. Take for example a free-kick early one: it was an innocuous challenge and Chivu goes to argue with the referee only to immediately stop and get in his position, meanwhile Sneijder has gone over to stand in front of the ball, ensuring Barcelona can’t take their free-kick until Inter are ready. These are minute things, but add up. Barcelona, on the other hand, were obviously getting frustrated, bickering with the referee and giving away the ball sloppily.

The only exception to this was Thiago Motta, even though the initial foul was harsh, he deserved to be sent off for the fracas after it. Now a man down, Inter gave up on attacking, openly ceding possession to keep their shape. Mourinho switched to a 4-2-3-0, with Chivu moving into Thiago Motta’s spot, Eto’o shifting to the left and Milito to the right. They formed two deep narrow bands of four with Milito and Eto’o tracking Barca’s attacking full-backs.

Having seen Hercules beat Barcelona with a similar gameplan and the Catalans now without their designated big man Zlatan Ibrahimovic, you would expect Mourinho to more or less follow the same blueprints with some tweaks. He didn’t.

Johan Cruyff spoke before the game about Barcelona’s pressing game: “We want the ball, because I want to decide how I want to play. If I’ve got the ball, the others have got to adapt themselves. Mourinho in his way of playing at Inter Milan was always the opponent had the ball and you adapt yourself. But that’s not the philosophy of my game. That’s why you see people like Guardiola, he is passing this on.”

Pep Guardiola also spoke at the beginning of his tenure about it, saying “without the ball, we are an awful team.” Barcelona press high and win the ball back as close to the opposition’s goal as possible, creating more goalscoring opportunities and making it harder for the opposition to fashion their own chances, by giving them less time and space on the ball. It also packs Barcelona’s players closer to make their passing game easier. The success of this is obvious from the dominance of Barcelona over the last couple of years.

Firstly, playing deep and narrow works because, with Ibrahimovic gone, they have no tall attacking players, meaning there is no chance of a simple long ball into the box to head on close to goal – Barcelona’s attackers won’t be winning many aerial duels against bigger defenders. It also means that Barcelona are forced into playing in front of you at all times, ensuring you have essentially got ten players between them and the goal, even Messi will have a hard time getting past that.

Secondly, it gives Barcelona less space to attack behind. The classic Barcelona pass is the slotted through ball between or over the centre-back and full-back. By playing deeper and narrower Inter compressed the area Xavi had to hit this ball into (fig. 13), by playing higher Real Madrid enlarged it (fig. 14), and by giving Real Madrid so much time on the ball early on they allowed them to take advantage of it.

Very early on Madrid’s backline were getting around this by dropping off whenever David Villa tried to run in behind (fig. 16), but they quickly stopped this when Barcelona began to exploit the widening gap between them and the midfield.

None of this really had much effect on the first goal though – instead it was the fault of those higher up the pitch. Real’s set-up was quite similar to he one Inter used against Barcelona before Thiago Motta got sent off (Angel Di Maria in front of Marcelo to stop Dani Alves like Chivu, Cristiano Ronaldo free on the right like Eto’o), but with some unusual switching of roles which can be seen in the build-up to Xavi’s opening goal.

After the goal, there was some re-arranging for Real, they would press a bit more and one of Ozil or Alonso would cover Xavi’s runs when he left Benzema’s area (although the latter was unadvised, with Messi, Pedro and Iniesta operating in his and Sami Khedira’s space) until an extra defensive midfielder in Lassana Diarra was brought on, but after going behind it became an exhibition for Barca as they slaughtered Madrid.

It was the exact opposite of what you would expect a Mourinho team to be: indisciplined, unorganised and tactically naive, which makes the rematch in April all the more interesting.

7 thoughts on “Mourinho vs Barcelona: A Game of Two Years”