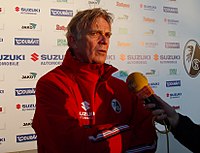 Upon the arrival of John W Henry and his merry band of stat-men from Fenway Sports Group at Liverpool, the media scrambled to find out what they could about him.

FSG also ran the Boston Red Sox, a team that had endured an 86-year title drought, a touch longer than Liverpool’s, until they won the World Series in 2004, just two years after Henry and co took control of the team.

What’s more, they had done it with Theo Epstein, who, at 28, was the youngest general manager in the MLB’s history. Yale graduate Epstein was a disciple of Bill James, the statistician who exposed much of the conventional wisdom in baseball as “ridiculous hokum”.

The next thing the English media latched onto in regards to FSG was “moneyball”, which is where James comes in. He studied baseball statistics and found that much of what many teams were doing was irrational. For example, he found that the most important statistic was on-base percentage – something rarely considered by those in baseball – while sacrifice bunts and base-stealing were ineffective tactics. Baseball by and large rejected James’ findings; after all, it was how they had always done it and it hadn’t been wrong before. Billy Beane, general manager of the little Oakland A’s, did not.

Beane is the subject of Michael Lewis’ book Moneyball, and the man who tested James’ ideas. Using traditional scouting methods, the A’s could not compete: teams like the New York Yankees and Boston Red Sox had more money than them, but James had pointed out that traditional scouting methods were inefficient. Instead, Beane looked for players with better on-base and slugging percentages, attributes which were undervalued by other teams. This allowed Beane to assemble a competitive squad on a much lower budget than those he was competing against, repeatedly making the play-offs despite their financial disadvantages.

John Henry had been a reader of James’ work, and hired him as Senior Advisor on Baseball Operations for the Red Sox in 2003. The Red Sox took his and Beane’s principles, combined it with their mightier financial clout, and ended their title drought a year later.

Beane’s cut-price success led to the misinformation on this side of the Atlantic that FSG’s moneyball techniques would just involve looking for players on the cheap, when it’s actually about exploiting inefficiencies in the market. So far, they haven’t done this; fears of tight-fisted owners disappearing with a host of big money transfers. Rather, they seem to have embraced the inefficiencies, paying over the odds on a several players due to the well-known “English premium”.

It seems unlikely they will continue in this vein, particularly with the new Financial Fair Play rules to keep an eye on, but, having admitted they know little about the sport, it would be impractical for them to enforce their moneyball techniques on the club. Right now, while they get to grips with football, leaving it to Kenny Dalglish to construct a successful side is probably the best course of action. However, the appointment of Damien Comolli, a friend of Beane’s and another well-known user of statistics, as Director of Football hints at their future strategy.

Liverpool’s future transfer policy won’t necessarily be the original form of moneyball in football, however. In 1991, several years before Beane over-achieved with the A’s, SC Freiburg appointed a secondary school teacher with just 13 games of professional coaching experience in charge of TSV Havelse as their manager.

Like James, Volker Finke saw football as inefficient and set about finding a way of making Freiburg competitive despite their limited finances. As it stood, the big clubs would hoover up the best, most expensive players, ensuring they finished top, the middle ones would pick up the cheaper equivalents, and the bottom clubs would pick up what they could afford. The only other ways were to play ultra-defensive football or to focus on developing youth – the former went against what Finke wanted to do, and in the latter the big clubs would eventually just snap up the youngsters anyway. Finke instead looked to do something different from the rest of German football.

Arrigo Sacchi had huge success playing a style of football in which everyone had equal responsibility for attacking and defending. Of course, Finke didn’t have the likes of Marco van basten, Ruud Gullit or Franco Baresi to use in this universal style, but everyone else in German football was looking for players who were either very good at defending or very good at attacking – those who were fairly average yet decent overall were undervalued, so he was able to buy this sort of player cheaply.

Although many predicted Freiburg, forced to rebuild their squad, were in danger, Finke got them promoted to the Bundesliga in his second season, playing what became known as “concept football”.

“Our playing system does not depend on the individual,” Finke said. “I don’t want team leaders. That’s a line of thinking that buries other players’ strengths.” He had taken on the same universal principles as Sacchi, along with the attractive passing. “‘It’s boring to switch flanks and knock the ball from one wing to the other. We build through the middle, where there is little space. You play three or four short passes to lure the defence into what they think is the danger zone. And then you suddenly open up the game over the flanks – that’s what is really dangerous.”

They scored an impressive 102 goals in 46 games, but the two main strikers, Altin Rraklli and Uwes Spies, managed just 27 goals between them. However, Spies had got more assists than any other Freiburg player. In the system, everyone was responsible, so who got the goals didn’t matter.

Freiburg had never finished higher than 5th in the 2. Bundesliga before, and now they were competing on their little budget with the likes of Bayern Munich in the Bundesliga. They narrowly avoided relegation in 1993/94 on goal difference, yet finished third in 1994/95, qualifying for the UEFA Cup. Finke had exploited the market to great effect, taking a team of unknowns to European competition, but things would start to go downhill from there.

In had come Swiss starlet Alain Sutter from Bayern Munich, who, a bigger star than the rest of the team, didn’t buy into the team ethic. Bottom of the table in the last few months of 1995, in came Harry Decheiver, a poacher not in keeping with the rest of the team and, like Sutter, considered himself different from the rest of the team, while the moaning of JÃ¶rg Heinrich forced Frieburg into letting him leave for Borussia Dortmund in January. Decheiver’s goals ensured they escaped relegation, but not for long, dropping back down the following season.

Finke was allowed to continue, but was now tasked with replacing the 16 players who had left the club upon their relegation. The problem was that Freiburg’s success meant clubs no longer undervalued the clever, technical players and so they no longer had an advantage. Just as Beane hasn’t been as successful at the A’s since the bigger market teams like the Red Sox have copied his moneyball techniques, Finke could no longer pick up his favoured type of player on the cheap. “The tactical advantage we used to have is gone,” he said in 2001.

No longer able to buy these players in Germany, he and his scouts looked elsewhere, to Mali, Tunisia and Georgia, to find them at low prices. They jumped straight back into the Bundesliga for the 1998-99 season, where they finished mid-table, then won another UEFA Cup place in 2001 after finishing sixth, only to get relegated again in 2001-02. They bounced back again, finished mid-table, then were relegated in bottom place the next season. Freiburg were no longer special – they still played their pretty football, but, now everyone else had copied them, they didn’t stand out and didn’t have their previous advantage.

This time Freiburg didn’t bounce straight back up, they finished fourth in 2005-06. They then started the next season awfully – going into the Christmas break they were in the relegation zone, looking at demotion to the third division. Freiburg’s board decided to keep Finke until the end of the season, but declared he wouldn’t be with them next season. The decision was strange: they didn’t want him next season, but were willing to risk relegation with him in charge this season.

Freiburg then began to win, and win, and win and win and win. A group called “Wir sind Finke” (We are Finke) was started in an attempt to get the board to change their minds, but the team were posing them the biggest problem. Not only had they evaded relegation; promotion was now looking a possibility. They finished fourth, missing out on promotion on goal difference to MSV Duisburg. In the third from last game of the season against Paderborn, goalkeeper Alexander Walke had given away a goal in injury time with an awful pass. Some better footwork from Walke or indifferent timekeeping from the referee and Freiburg would have had that one point needed for promotion, but they didn’t get it and Finke was sacked. 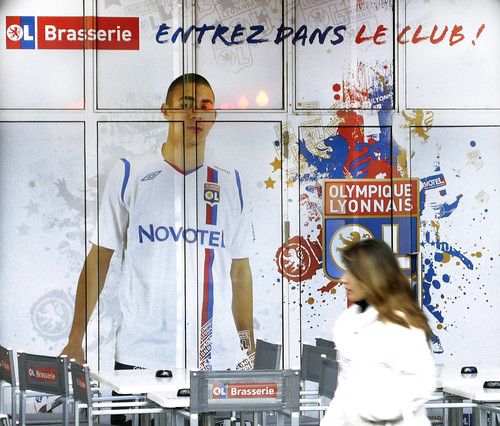 Finke’s story draws the most parallels with Beane’s, but Freiburg aren’t the only football team to take control of the market. Under the stewardship of chairman Jean-Michel Aulas, Olympique Lyonnais came from relative obscurity to dominate French football over the last decade.

Aulas bought Lyon while they were in the second division in 1987. In 1989 he appointed local boy Raymond Domenech as coach, they finished top of the league undefeated and qualified for the UEFA Cup two seasons later. For his project to work, Aulas needed the team to be in the first division, so gave Domenech free rein to sign whomever he liked. Once there however, his approach changed.

Like the Oakland A’s, Lyon’s transfers are decided by a team of people: Aulas, technical director Bernard Lacombe and new coach Remi Garde. Their logic is that the more people overlook a transfer, the more diverse opinions, thus closer to the “correct” one, you will get and so less mistakes will be made, whereas most clubs, most notably in England, only one man – the manager – will make the decisions.

When it comes to the players themselves, they don’t rely on statistics like the A’s (at least not to my knowledge) but they do look to exploit the market via their more traditional scouting methods. “We buy young players with potential… between 20 and 22 years old,” say Aulas, which again relates to baseball. Most baseball teams preferred to draft high school players, but Beane preferred to draft college players, four or five years older. Beane himself had been one of the best players around at 18 and failed to make the transition to the major leagues – teenage ability may not be a great indicator of how good you will be later in your career, yet in your early twenties you are almost fully formed but still young and unproven enough to be inexpensive. A few years later, these players will most likely be well-established, thus more expensive and wanting bigger wages.

The market dictates strikers are generally more expensive than any other position, so Lyon look to avoid buying them, much to the chagrin of Gerard Houllier. When it came to foreign players, they only looked for those who had the personalities to adapt, then helped them do so – giving them a translator and helping them to find a house and schools for their children.

Using these methods, Lyon were able to construct a team of good players relatively cheaply, ensure they did well, then sold them on for more money than what they had spent, creating more money to invest in the squad. Their success brought in more fans, going from a small club to what would be known as a “big-market team” in baseball.

2 thoughts on “Moneyball in football”