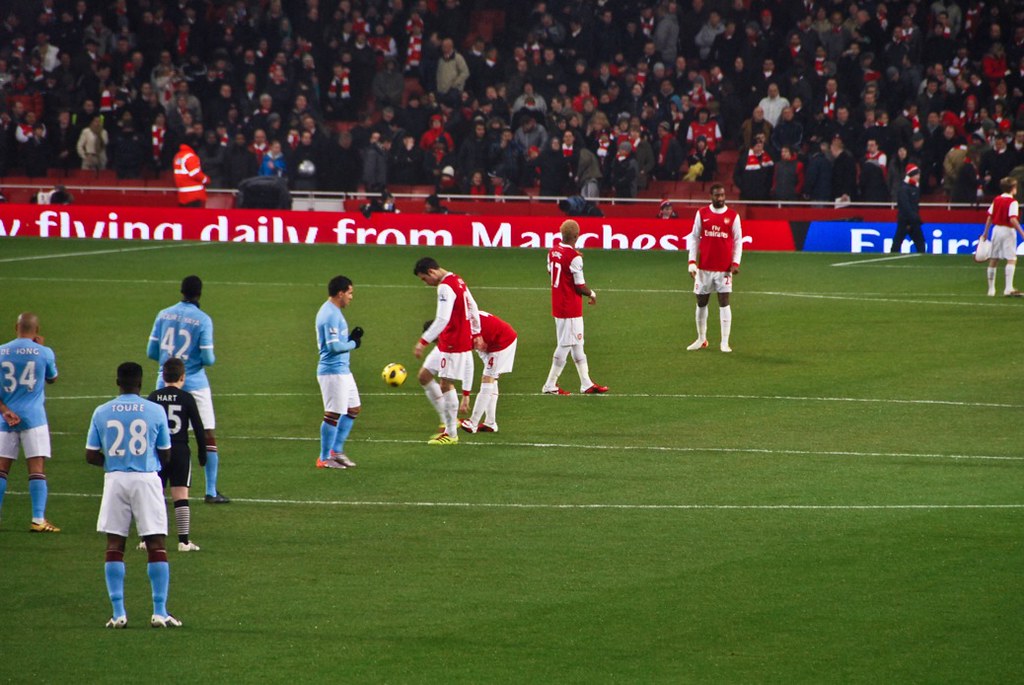 Roberto Mancini’s tactics against Arsenal on Wednesday night have been much maligned by many of both the mainstream press and football blog twitterati, but I contest that in his City side, Mancini has instilled a tactical strength and it is highly effective. In a previous article, I analysed how Mancini gets his side to line up, playing a 4-2-1-2-1 in generic nomenclature, with two very defensive midfielders, a box-to-box midfielder and two very different wingers behind a false nine. When you take away the fanciness of what I just wrote, it basically means that City play with 6 players who sit back and then one player with both defensive and offensiveÂ responsibilitiesÂ and then three who attack (although the ‘wingers’ do have defensive responsibilities as well).

It can be both very regressive but it can also be pro-active, and that is the nature of how Mancini sees football, that teams should have an element of universality, an ability to adapt to differing situations. There will be times when City will attempt to dominate possession and play high up the pitch, particularly against – without being disrespectful – lesser opposition. They don’t play with any specific flair, but they are effective (when they try their best to fall apart). But when the situation necessitates it they can play deep and soak up pressure and try and play on the counter, whichÂ admittedly, there wasn’t much of against Arsenal, but Mancini won’t be the first or last coach to go to theÂ EmiratesÂ with the remit of getting a point.

A lot of the talk about the club has been about the massive amount of money that has been spent on the squad, and for some reason this seems to mean that the squad mustÂ inherently play attractive, attacking football. But Mancini is a pragmatic manager, or he certainly has modelled City in such a way. Or, more specifically, how the team plays at the moment. However, in my earlier article I speculated that City will become a more progressive side when Balotelli, and more specifically, Kolarov is fit.

A lot of money was spent on Aleksandr Kolarov in the summer but he was one of the signings that didn’t attract that much attention, comparatively anyway, in the UK. However Kolarov can provide a far more offensive outlet from deep than the other prospective left backs at the club. This, in theory, changes the dynamic of the team when they go forward.

Difference in passing distribution between Kolarov and Zabaleta

As can be seen here, Kolarov’s ball distribution is far higher up the pitch and more evenly distributed up and down the left flank, whereas Zabaleta plays primarily around the halfway line. This shows that Kolarov is a more progressive full back, hugging the touchline thus generating more width for the City attack.

This means that the team isn’t asÂ lopsided, with Milner keeping an outlet on the right and Kolarov pushing forward on the left. This means there are more options going forward and the width that is needed to stretch defences is maintained. And, although perhaps not by conscious choice, Mancini in several of the games that Kolarov has played a centre-back has been utilised at right back (although labelling Boateng strictly a centre back is paying him a disservice, but he’s certainly a more defensively sound right back than others) to counter act any defensive weakness caused by having one of his defensive unit pushing further forward.

Here it is evident that the teams overall pattern of play is much more progressive with higher percentages down the left flank and more passes being played in the final third. The irony is, that in the game where City had the ball more in the final third they only won 1 – 0, whereas in the other – where most of their play was in the middle of the park – they won 4 – 0. But it can be seen that Kolarov provides more width and ergo creates a finer balance to the side than Zabaleta or any of the other players City have deployed at left back this season.

With the signing of Dzeko imminent and Kolarov’s return to fitness, there is a very real chance that a far more progressive City will become apparent. Having an alternating attacking unit of Silva, Balotelli, Tevez, Dzeko, Milner, Johnson and Kolarov will be far more potent than the one at the moment. It will also mean that Tevez can drop deeper, placing less onus on Yaya Toure to be a creative outlet, where he has struggled at times over the course of the season. This isn’t to say I expect a fervently attacking Manchester City side under Mancini, as it would go against the beliefs ingrained within him, but certainly a far more effective one.

Of course, how Dzeko is implemented isn’t known yet, and whether Kolarov will be able to have a sustained impact is also suspect, but Mancini certainly has a lot of potent attacking potential available to him as well as a sound defensive tactical base from which they can operate. Should Kolarov, Balotelli and Boateng all reach full fitness and stay fit and Dzeko settle into life in the premiership then Manchester City’s title tilt may not have to wait for a couple of seasons as has been predicted in someÂ quarters. There is certainly strength and depth within the squad, and although there are a lot of big egos clattering into each other, sometimes a bit of tenacity can do a team a service.

The argument isn’t whether Mancini has the tactical nous to engineer his squad into a top level side, it’s whether he can keep his squad functioning and the hierarchy above him happy.