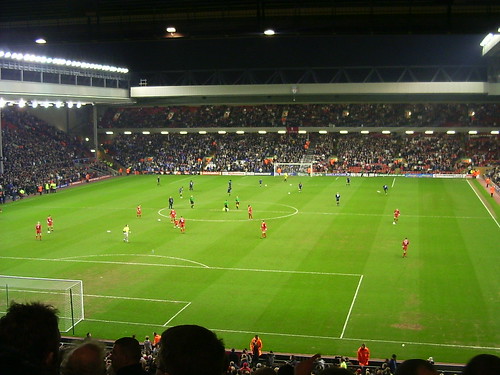 Dominant 1-0 wins over lower opposition where they let the opposition get back into games needlessly: the pattern of Liverpoolâ€™s opening matches against Stoke and Aston Villa were very similar. Itâ€™s fair to say that Liverpool are likely to use the same approach throughout the season or at least against weaker teams.

One of the most obvious patterns was that both Philippe Coutinho and Jordan Hendersonâ€™s starting positions were fairly narrow, creating more of a 4-2-2-2 shape. This made it easy to get the ball forward and generally keep possession, with Villa and Stoke unable to close Steven Gerrard and Lucas Leiva down without leaving space between the lines for Henderson and especially Coutinho to take advantage of. Rodgers’ reasoning for this may be because Liverpool have sometimes looked poor when pressed high up the pitch, but the box formation makes it difficult for the opposition to keep compact and easier for Liverpool to move the ball from zone to zone. It also alleviates the need to use split centre backs, hopefully putting an end to how ludicrously easy Liverpool were to play on the counter against last season.

Iago Aspasâ€™ role in both matches was a bit uncertain. Defensively itâ€™s been clear that heâ€™s been asked to occupy the deepest opposition midfielder but offensively he hasnâ€™t done much to form a bond with partner Daniel Sturridge, although, given Luis Suarez is likelyÂ  to replace him when he returns from his suspension, this might be a brief problem.

The interiores had their own jobs to do. Coutinho was to do what he has done since his transfer to the club: drift between lines and try and find the final pass. Henderson’s role was less glamorous – like he was asked to do for much of his successful run in the latter half of last season, he was supposed to add a work rate to the midfield, but in both games there was no fullback to stop or playmaker to pressure. He did okay, keeping the ball well and putting in some superb runs, but nowadays the best teams are using creative players who can still put in a defensive shift when needed such as Oscar. If Liverpool are to get to the next level, they will need a player like this because there have been times where the use of Henderson needed to cover the lack of athleticism deeper on the pitch sacrifices creativity higher up. 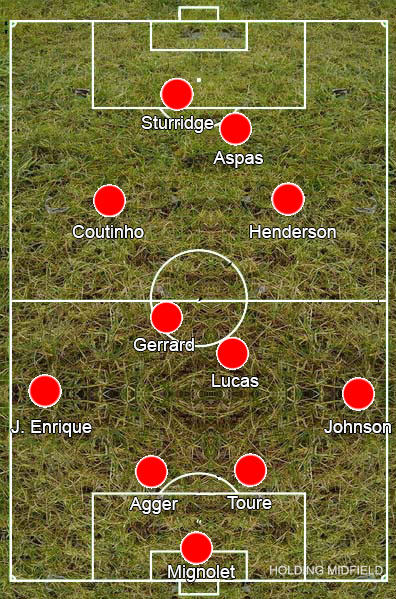 Liverpool’s wide men tucking in meant the full-backs behind them had plenty of space to work with, as Villa’s wingers were forced into going narrower to combat them and had to stay high up the pitch in hope of catching Liverpool on the counter.

As Sturridge managed to score in both matches and has been incredible up front in terms of stretching play, movement and linking up with the midfielders, it has been suggested Suarez will be moved from his central position to the flanks when he returns from suspension. However, despite dominating possession, Liverpool have still found it difficult to penetrate opposition defences. Because of the way Suarez interprets his forward role, dropping a lot deeper, he will look to take an initial space on the flank, encouraging more movement from other players arriving from deeper and wider areas. If there was a return to a lone striker formation with Sturridge featuring wide, it may encourage even more fluidity but with more goals – although the problem may arise that Liverpool may not have the energetic second function midfielder to take advantage of the space Suarez makes, plus, assuming Henderson and Coutinho both stay in the side which position does each player take? The left or the centre of a band of three?

In the second half of both games, particularly against Aston Villa, the opposition full backs got forward a bit more as their team got more of a hold on the match, so Liverpool’s wide men had to help form a bank of four. The team struggled from then on because Villa appeared to have an extra man in the middle thanks to Liverpool playing with two forwards, getting back into the game and almost levelling. It could be said Liverpool purposely sat back but then transitions werenâ€™t efficient enough to suggest this had been practised in the way a team like Borussia Dortmund look to draw in the opposition before countering. Rodgers had seemed to acknowledge the Villa full-backs getting forward since he brought Aly Cissokho onto the left side of midfield to track Matthew Lowton and brought on Joe Allen to add an extra midfielder.

Against higher quality opposition Liverpool will probably revert to a pure 4-2-3-1 with Henderson taking up the most advanced central midfielder position again to stop better passers of the ball from getting a grip on the game. Although it has looked promising early on, the problem with the current 4-2-2-2 is the lack of variation. Although Manchester City did lose to Cardiff and obviously have a better squad, they are a good example: Fernandinho and Yaya Toure can operate as a mobile pivot whereas Gerrard and Lucas cannot and the front four of Jesus Navas, Sergio Aguero, Edin Dzeko and Samir Nasri provide width and penetration without sacrificing creativity in some areas. It may be crude, but to qualify for the Champions League Liverpool may have to become a Manchester City lite if they want to adopt this system.