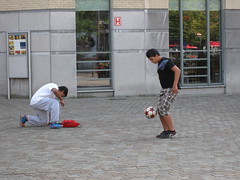 Following the previous article on the â€˜War in the Belgian Pro Leagueâ€™, I can proudly present you with a sequel. The play-offs have begun and two games have already been played. However, not all is well as some teams seem happy to order a law suit if they feel cheated. But first: a brief explanation will guide you through the league.

Play-off arrangements
First things first: play-off I. This play-off is to be played by the teams who manage to end in places 1-6. They play for the title and two Champions League (qualifiers) tickets. The team that ends third receives a ticket for the Europa League. The team that ends fourth will play the winner of the game played by the winners of Play-Offs II and III, also for a place in the Europa League (clarification will follow). Teams five and six each receive â‚¬800.000. Oh, and I forgot to mention that they lose half of the points they gathered throughout the regular competition.

Then there are play-offs II and III. These play-off groups are determined by the teams that end in places 7-14. Teams 7-10 play Play-Off II, teams 11-14 play Play-Off III. These teams lose all their points and start again from zero. The teams that end first in these Play-Offs will play each other for a spot in the â€˜European Finalâ€™ against the team that ends fourth in play-off I. The winner of this final receives the last European place.

Another one bites the dust
Not only are there tensions over who might win the title, some teams deem it necessary to throw law suits in every direction. To start with the most important one: the one regarding football.

Anderlecht is crumbling. They had a great season, being almost unbeatable. However, February came and Anderlecht saw their most important player, Mbark Boussoufa, leave for Russian Dollars. Leaving behind an enormous gap, Anderlecht seems to have lost their way. This has opened the door for other contenders, mainly RC Genk. But it does not seem to end here as Standard and Club Brugge are having a revival as well. And we cannot forget about AA Gent either. It promises to be a very interesting title challenge. One thing does look certain: the big clubs who voted yes on the play-offs are the only ones that will be able to get benefits out this competition, because the other play-offs are threatening to become a football graveyard.

But as in real life, some clubs are not willing to let things be the way they are. In this case, newly promoted Eupen are having difficulties with accepting the possibility that they might be battling against relegation. Instead of being classical heroes, embracing their fate, they are quite happy to play the modern day anti-heroes. It started with the game Lierse-KV Mechelen, won by Lierse. Eupen are now claiming that Lierse played the 18-year old Jason Adesanya while he wasnâ€™t eligible to play. In that case, Lierse would lose that game, losing the three points to Mechelen. Eupen would be saved and playing play-off III, Lierse would be playing in the play-downs, Mechelen in play-off I and Standard in play-off II. While Eupen are merely filing this law suit to avoid relegation, admitting to this change of plans would have far-reaching consequences. It speaks for itself that the FA was not allowing this. Eupen were not satisfied and went to a civil law court. This court ordered that the first games for Lierse and Eupen would not be played until after the case was resolved. The FA ordered otherwise and the games were played, costing the FA one million Euros to Eupen. Unfortunately, Eupen did not get any favours by the court and lost the case. Eupen, still not backing down, has revealed that they will be continuing their case, hoping to avoid relegation.

After the play-off voting, it seems that football has found yet another way to die. If every club will be filing law suits every time they feel cheated, soon there will be no more games to play. Let us end this article with a one minute silence for Belgian football.