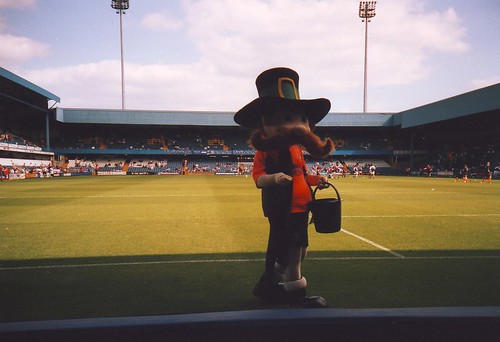 The bottom end of the League Two table in May 2013 could have provided the definitive case study of the cultural and financial impact of small businesses that fail to adapt to shifting landscapes. Two of the bottom five could be said to be working from blueprints drawn up in sunnier fiscal climes that stubbornly failed to respond when the economic skies blackened â€“ Aldershot relegated as the receivers laboured to push square pegs through round holes in the name of solvency, and Wimbledon keeping their noses just above the watermark whilst weighed down by lingering debts dating back to the purchase of the lease on Kingsmeadow in 2003. The outlook is cloudy for clubs with a local focus but amongst all the poor forecasts one club who have suffered more than most in recent years, on the pitch and off, is finally laying the foundations of a real success story for the Football Leagueâ€™s corporate fodder. With a new Managing Director in place who knows a thing or two about maximising resources at this level, Plymouth Argyle will be looking to push on from last seasonâ€™s 21st place finish.

Martyn Starnes has been reflecting this week on the challenge ahead at Home Park having stepped over from a similar role at Yeovil Town, and the former Glovers exec brings to the Devonshire coast an optimism that Plymouth can again be a force in football and in business following his stewardship of Yeovilâ€™s rise: â€œMy vision is success and weâ€™ll be looking for (it) earlyâ€- forgotten vernacular at the club following years of perpetual collapse. After a decade of bone-crushing debts and speculative over-spending Starnes is placing financial viability and sustainability at the heart of a revised model and with the backing of club owner James Brent the foundations are already in place for major re-development of the clubâ€™s facilities that will seek to utilise the community as a catalyst for growth.

The consensus is that with Argyle one of only three League clubs in a 300 mile radius the support that could grease the ascent up the divisions exists en masse, if only provisions can be made to encourage long-term engagement, both emotionally and financially. A deal with Plymouth City Council to bring the Pavilion leisure facility under the private ownership of Brent and the Argyle board will act as a springboard to re-develop the clubâ€™s capacity to accommodate fans both on match days and beyond, pending the approval of final planning permission. The paperwork is expected to be signed off this week with work beginning in the autumn, launching the club and its long suffering fans into a fresh wave of catharsis laced with the kind of hope not known in these parts since a spending spree in the mid-00â€™s rocketed Paul Sturrockâ€™s team briefly to the top of the Championship.

Those days remain a cause for trepidation however. Earlier this month Brent appeared conspicuously single-minded when quizzed about his medium-term plans for the club on BBC Spotlight. The Championship is in the clubâ€™s sights but weâ€™ve been here before â€“ the 2005 team that knocked on the door of the Premier League had risen quickly from the fourth tier too and the current board cuts its ambition from a familiar cloth.

But Brentâ€™s plans on paper at least reflect an understanding of how a football club needs to approach its role in the community holistically â€“ to borrow a term in vogue from the gameâ€™s A-listers â€“ if itâ€™s to harvest the potential of being at the centre of a vibrant social movement. The Council is a long way towards realising its multi-million pound â€˜Vision for Plymouthâ€™ project to breath fresh life into the local economy, driving up the population through a major new housing project and in turn laying the foundation for a genuinely innovative football project in the lower leagues.

So Argyle, with a supportive local authority backing an owner who is prepared to invest both money and brains in a long term partnership, look suitably determined and amply resourced to close the book on an era that looked for a long time like it would bring the club to its knees. And in Starnes they have a man with a proven track record of turning carefully planned commercial decisions into results that fans can appreciate. The Football League has given us all plenty of moments to send faces crashing into palms since the Premier League began fracking the landscape. Plymouth might have found a way to place football back at the heart of a local revival.