With these two expected to be chasing Uruguay for second place in the group, this game was probably the most important for either side. Russia had opened the tournament well, thrashing a poor Saudi Arabia side, while Egypt narrowly missed out on a draw against Uruguay, conceding a last minute header by Jose Gimenez. 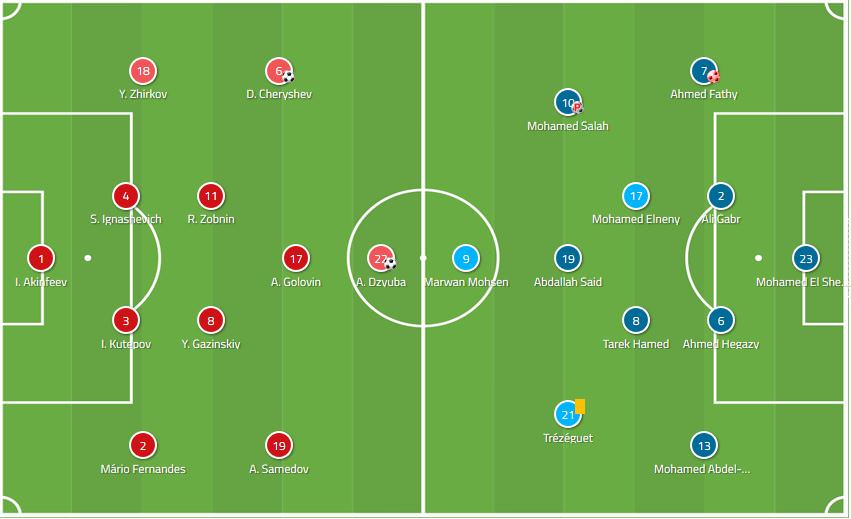 Those starting results made this game even more important for Egypt, who chose to start star man Mohamed Salah, having kept him on the bench for their opener. Salah replacing Amr Warda was their only change, whereas Russia brought in Denis Cheryshev and Artem Dzyuba for Fyodor Smolov and the injured Alan Dzagoev, with Aleksandr Golovkin starting central behind the forward.

Both teams lined up in what looked like the same formation on paper, but varied a lot in practice. Russia’s 4-2-3-1 was the standard we are used to seeing, with the central attacking midfielder Golovkin up alongside striker Dzyuba in front of two banks of four. The pair would stand in front of Egypt’s holding midfielders to block passes from the centre-backs into their feet, while whichever man was nearest would apply some pressure onto the centre-back on the ball – Golovkin on Ali Gabr and Dzyuba on Ahmed Hegazy. The midfielders behind them would stay narrow enough so that the wingers could press the Egyptian holding midfielders if either of them managed to escape the cover of the strikers when they pressed.

Egypt also played in a 4-2-3-1, but rather than having the forwards drop back into a mid-block, Hector Cuper left Marwan Mohsen and Mohamed Salah high up the pitch to provide a threat on the counter. The pair would press if the ball was around the opposition area, but they wouldn’t track back very far, meaning those behind them had more ground to cover. Trezeguet would move back on the left although he wouldn’t tuck in much, leaving a gap between him and the rest of the midfield and likewise Abdallah Said would move back and sometimes drop in alongside Tarek Hamed, but he always seemed to wanting to move forward again too early, leaving more gaps. With Salah left high up the pitch, Mohamed Elneny had to move out to the right to cover behind him, which meant Hamed was left either alone or without adequate cover in the centre.

The Egyptians stopped Russia from pressing them by having the centre-backs drop off even further, making it so the Russian forwards couldn’t get close to them without leaving the holding midfielders behind them free.

Egypt didn’t appear to want to play into the midfield anyway though – they generally passed across the backline until there was a gap to play through into the feet of Mohsen or, if they couldn’t find a gap, simply hitting over the top to him, with the target man laying off the ball and the forwards combining quickly in an attempt to play in Salah.

This generally involved crosses from the left dropped in behind Yuri Zhirkov, which seemed an odd use of Salah – treating a world class creative force as a poacher. Salah occasionally managed to pick up the ball around the edge of the area and scare the Russian defenders but these moments were few and far between, with him struggling to get on the ball as Roman Zobnin limited his space.

Egypt’s centre-backs dropping off and their forwards not offering much defensively ended up leaving Egypt very stretched along the length of the pitch though. The likes of Said and Trezeguet were expected to drop back close to their own area to help defend, but then also combine with Salah and Mohsen in attack, while Elneny and Hamed had to cover all that space in between. Egypt didn’t push any of their defenders forward which meant they at least had adequate cover around their area, however any time Russia picked up the ball they had so much space they could simply go straight down the other end and attack.

The Russians attacked in a variety of ways. Their main tactic was to pump it long to target man Dzyuba, who was likely brought into the side for this explicit purpose – Stanislav Cherchesov stating: “Independent of whether Smolov had scored in the first game I think we would have preferred Dzyuba. He’s in good shape and tactically speaking in this game he was better fitted for the purpose and it was fulfilled.”

The attacking midfielders around him would then pick up the second ball while Egypt were left stretched. They would often try to get it wide to Cheryshev to send a cross in, however they were unafraid to be patient and pass the ball from side-to-side if the option wasn’t on, getting their full-backs forward to join the attack and try to overload the Egyptian defence.

Either one of the midfielders would try to hit a pass over the top or it would go back out to the wings for a cross. With Egypt keeping four men back just to defend, they were able to hold off Russia in the first half even if the hosts were able to attack at will whenever they picked up the ball, heading away or having Mohamed El Shenawy claim the crosses.

While Russia weren’t creating good quality chances, the fact that they were constantly able to get at the Egyptian backline saw them finally get the opener early in the second half. El Shenawy punched away a cross to Zobnin on the edge of the area, who shot into the ground, bouncing into the area only to bounce off of Ahmed Fathi into the opposite corner of the goal. It was a fluke but Egypt’s failure to stop Russia constantly getting forward had punished them.

The second minutes later was a better example of Russia’s strategy. A long ball forward to Dzyuba, Cheryshev winning the second ball, it being sent wide to Aleksandr Samedov then Mario Fernandes overlapping to send in the cross. Cheryshev’s ability to easily find a gap to finish also perfectly encapsulated how easily dragged apart the Egyptian midfielders were.

The third was slightly more basic: a long ball up to Dzyuba to chest down and finish.

In desperate need of goals after a disastrous 15 minutes, Cuper brought on attackers and moved Salah more central, bagging a penalty as a consolation, but as their main problem was the broken and stretched structure of their team this only worsened their problems and the far more balanced Russians could easily hold them at arm’s length, sealing their place in the last sixteen and Egypt’s exit.