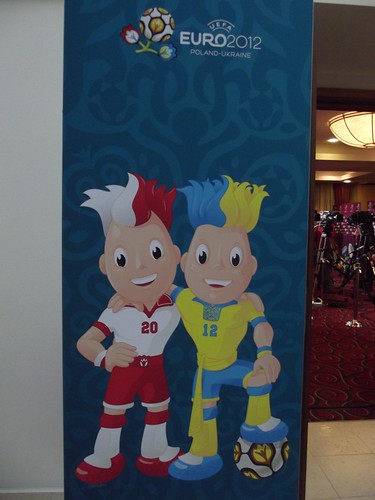 Slavek and Slavko were two young boys who lived either side of the Ukrainian-Polish border. The boys shared a love of football and would sneak off to each other’s villages to play with one another. When it was announced their countries would host Euro 2012, they were wildly excited and decided to have a celebratory kickabout.

The boys were having a great time until Slavko overhit a pass to Slavek and the ball bounced into an old well. Slavek thought he could climb down easily so he went down to retrieve the ball, but when he attempted to clamber back up he found the sides were too slippy. Slavko tried to help his friend back up, pushing himself to his limits – after all, he was the one to kick the ball down the well – until he slipped and fell down next to Slavek.

The boys were trapped. They waited for help but no one came. All of their towns’ resources were devoted to preparing for Euro 2012. Their families pleaded with authorities to help them find their sons, but UEFA insisted all resources go to Euro 2012. The boys were stuck in the well, barely surviving by eating the rats that nibbled on them while they slept.

Player of the tournament

Truthfully, there isn’t a great deal of people to choose from. Andres Iniesta was his usual excellent self, his dynamism making up for Xavi’s struggles, and Antonio Cassano’s brilliant performances have largely snuck under the radar. Regardless, it is difficult to look past Andrea Pirlo. After a solid group stage, Pirlo made the knock-out rounds his own, pulling the strings in the Italian midfield. His performances are quite difficult to judge as he was largely left free to do as he pleased until the final, where multiple Spanish players squeezed him out of the game – still, no one else has had as positive an influence on the tournament as him.

Young player of the tournament

This is a category in which there really is only one obvious answer: Mario Balotelli. The Italian forward has had a mixed tournament, combining pretty average displays like his one against England with clinical ones such as the Germany game. Nevertheless, he hasn’t exactly had much in the way of competition, with most managers opting to stick with established players rather than risk youngsters.

Goal of the tournament

Mr. over-rated, lazy, selfish, flat-track-bully himself, Zlatan Ibrahimovic shows there might be something a large chunk of football fans are missing against France.

Manager of the tournament

The manager decision was a pretty simple choice: for winning the tournament Vicente del Bosque gets the nod. Joachim Low was looking a good bet until his side’s poorly thought out exit against Italy in the semi-finals, while neither Spain or Italy have been completely convincing – certain tactical choices for both teams being questionable. In the final however, Spain hit their peak, attacking with much more vigour than they had for most of the tournament, which Del Bosque must be commended for.

Disappointment of the tournament

There was a lot of discussion about the style of play two years ago in South Africa, playing with a grinding pragmatism rather than the flair of Total Football. It was easy not to notice that the Netherlands had actually played awfully despite making the final at the World Cup, only playing well once, in the semi-final against Uruguay, only progressing due to the poor quality of their opponents or because, in the case of Brazil, their opponents collapsed.

Nevertheless, Bert van Marwijk listened to criticism and seemed to have created a more attractive side. The Group of Death revealed the truth: he had created a more open side. Their attack was made up of very talented players, but their defence was shocking. The same had been true in South Africa, but good organisation had held it together. The only saving grace was the heavily-criticised holding midfield pair of Nigel De Jong and Mark van Bommel, who had kept Christian Eriksen out of the opening game, yet even they found themselves stretched by German midfield trio.

By the time the Dutch faced Portugal, Van Marwijk had folded and gave the critics what they wanted, throwing yet more attackers into the mix with Rafael van der Vaart as one of the holding pair and the smart but very limited poacher Klaas-Jan Huntelaar up front. Nil pois.

Team of the tournament