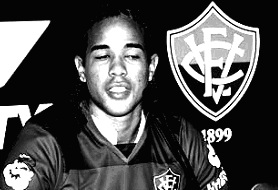 Eduardo da Silva Nascimento Neto first came to my attention a couple of years ago. I must confess I found him while playing Football Manager, but after looking him up I believe he could be as talented as Sports Interactiveâ€™s researchers deem him to be.

My problem with the defender was I could never decide where to play him in my renascent, virtual Sunderland team, and this has been true of his real career too. Capable of being deployed at left back, centre back and defensive midfield, the 22-year-old may have suffered from his versatility in a similar way to English players Phil Jagielka and Gareth Barry, who did not blossom until their late twenties when they nailed down their specialised position.

Interestingly, as Defensive Minded editor Kabelo Bitsang pointed out in his recentÂ guest piece for FootballFarrago, versatility is now a prized asset for defenders in the Premier League since the introduction of the 25 man squad rule. So, should he move to England he could be a useful player – but he is some way away from a move to a top tier English club; he has just signed for second division Brazilian club Vitora.

The defender began his career at Bahia. Here he impressed as the team won promotion to the Brazilian Championship Series B in 2007, and this earned him a four year contract with Serie A outfit Botafogo.

He began hisÂ Belo career at centre back, but his inexperience showed in a match against Flamengo when he lost the ball in the centre of the park and the opposition counter-attacked to score. This saw him dropped from the team and he was not reinstated until the following year, where he now found himself at left back. Failing to claim this position as his own he spent much of 2009 in the reserves, and again, when he returned to first team action it was in a new position. New coach Estevam Soares gave Eduardo a chance in midfield, and he played here regularly during the teamâ€™s triumphant Guanabara Cup campaign in 2010.

A move to Europe ensued as he signed for SC Braga for Â£3.6m, but he only spent four months at the Portuguese outfit as his two-year contract was terminated after he arrived at training drunk. Tests revealed his blood contained 1.6 grams of alcohol per litre, and, although he was initially reluctant to leave the club as he had not had ample time to prove himself, his position proved untenable and he departed having made only one appearance. After a few months out of the game he moved back to Brazil and signed for Vitoria in early 2011, proving something of a coup for the club (providing he can stay off the caipirinha, that is). This was a controversial move, however, as Vitoriaâ€™s arch rivals are Eduardoâ€™s first club, Bahia. The Ba-Vi derby is one of the most fiercelyÂ contestedÂ games in the country.

Eduardo plays primarily at the back but is comfortable on the ball and likes to join attacks. This has seen him employed in midfield, but like David Luiz, another former Vitoria player, his best position could be as a libero style defender â€“ a position I examine in my upcoming piece forÂ Defensive Minded. Eduardo is too good a passer of the ball to be wasted in his own half, as illustrated by these videos of him playing for Botafogo:

Vitoria have a decent history ofÂ unearthingÂ and nurturing Brazilian talent. Bebeto, Dida, Marcelo, and Hulk have all played at Barradao, as well as theÂ aforementionedÂ Luiz, who is currently hitting the headlines at Chelsea for his forward thinking style. Eduardo looks to have the natural ability to follow in Luizâ€™s footsteps and with the right coaching and application he could become a formidable player. His start at Vitoria has been hampered by a thigh injury but some reports claim he is now fully fit, and he should be able to build upon his solitary appearance for the club in the near future.

Many thanks to the Vitoria club websiteÂ ECV1899, who were a big help in researching this article.

You can request a scout report on your chosen player or team with Football Farragoâ€™s simple form.

2 thoughts on “Eduardo Neto – The Next David Luiz?”