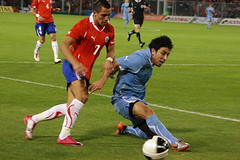 I can’t quite remember who it was that said it – I think it was to do with the Dutch and Louis van Gaal – but someone (probably Sjaak Swart) said something along the lines of “passing football isn’t the most beautiful. Dribbling is.”

In this respect, modern football has considerably dulled. As the stakes have raised and the manager has become more culpable for their team’s fortunes, risk-taking is less fashionable. Most top teams play a similar brand of European-based style – if they can keep the ball, the opposition can’t score, and they are much more likely to.

To a certain extent, teams like Barcelona and Spain are really very predictable. Their games are based on passing and passing and passing until the opposition is drawn out from their positions and a man is free. In his interview with The Guardian, Xavi, declaring himself “a romantic”, outlined a view on possession that we’re supposed to admire: “I think shit, the defender’s here, play it there. I see the space and pass.

Taking on a player is the ballsiest thing you can do as a footballer. This sort of style could be seen to be creating a culture where the risk of losing the ball would make players fearful of dribbling.

So what if a team decides they don’t want to get drawn out? What do possession-based teams do then? If both teams have 11 men, then how can you ensure there will be space or a free man? Somehow you have got to take one of the opposition out of the play. There are numerous ways to do this, not all of them admirable, but the most obvious way of doing so is dribbling, so here’s a video:

3 thoughts on “Dribbling as a pragmatic style”