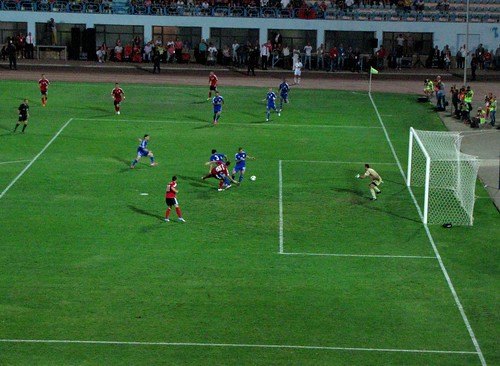 Rarely throughout the winding story of modern football, that great social tranquilizer that can whip the sting from a generation of national unrest with one blast of a FIFA-branded whistle, has much been made of the role that the game has played amongst divided populations. When the going gets tough the tough are encouraged to huddle together around the nearest big-screen and channel their collective energies into cheering on their team rather than vent about grinding austerity, failing public services or bare-breasted corruption, even when the football is as close to the root of the problems as in Brazil last summer and next. Take away the fanfare and the occasion and the gameâ€™s history is as much a story of augmenting division as it is of cultivating brotherhood. In Northern Cyprus football sits close to the heart of fifty years of intercommunal violence and bitter regret, in a place where memories of an excruciating past cast a stubborn die over the present. Football remains a conspicuous marker of an island nation wrenched apart, but two modernisers are determined to explore ways in which the game might live up to its bellicose hyperbole of hope and community.

The partition of Cyprus dates back officially to the drawing of the Green Line that followed the 1974 invasion of the island by Turkish forces, with the government in Ankara accusing the Greek-dominated assembly in Nicosia of failing to provide guarantees over the safety of the Turkish Cypriot minority on the island. In 1983 tensions reached their zenith with the formal declaration of independence of the Turkish Republic of Northern Cyprus but by then the DNA of socio-ethnic tensions between the Greek and Turkish populations had been weaved tightly for generations. Football had united the island as recently as 1955 but since then the game has been governed by two strictly separate associations â€“ the KTFF in the north and the CFA, who enjoy the recognition of the international community, in the south. Thereafter the KTFF have been kept tightly on a leash as far as the possibility of dÃ©tente with the southern clubs is concerned, a victim of the diplomatic tendency for governments to stamp on precedent before it can be set. A footballing union with the CFA would send the wrong signals, say the assembly in North Nicosia, and risk opening a valve through which the viscous fluids of reunification might flow upwards from the south. Football in this corner of Europe remains a pawn in the game of separatist politics.

The mood on the ground is more difficult to gauge. Cypriot nationalism is a delicate product of a centuries-old dialogue containing some stomach-churning ethnic chauvinism, and the scars left by the violence that ripped through towns and cities in the sixties and seventies are unhealed. Mass forced-relocation caused major displacement amongst and between communities and the islandâ€™s past bears an ugly impression on its present. In Famagusta washing still hangs on clothes lines from the day residents fled their homes. It is an eerie artefact that testifies to the existence of a ghost town, neither living nor breathing but real enough to remind Cypriots on the both sides of the line that theirs is a country for whom unity is indefinitely struck from their lexicon. Football is touched closely by the legacy of the past too, with Famagustaâ€™s top-flight side Anorthosis, Champions League group stage participants just three years ago, playing their games as exiles in Larnaca since their own ground falls within the UN buffer-zone that divides the north from the south. As recently as 2004 there was no free movement or trade permitted between the two states and although those restrictions have been loosened as part of the deal that bought Cyprus into the EU a whole generation has grown up either side of the line in total cultural and social isolation from the other. The ground is not fertile for tolerance and integration amongst two sets of communities who have been rigorously conditioned to be fiercely nationalistic towards one another. If football has a part to play across the divide it is difficult to locate from this distance.

But the authorities are looking to make a fist of it. Next week Hasan Sertoglu and Costakis Koutsokoumnis, the respective heads of the KTFF and CFA, will meet with Sep Blatter in Zurich to â€œdiscuss and finalise a provisional arrangement for footballâ€ with a view to â€œoutlining the steps for the progress of football in the whole of Cyprus.â€ Until that meeting takes place the terms outlined by both parties will be left open to interpretation. The most likely change to the status quo would be for channels to be opened for clubs from the north to begin playing friendly matches against those from the south before the league system opens up to incorporate both associations. What this would mean for the status of the two national teams is even less clear. With the KTFF not recognised by FIFA or UEFA Turkish Cypriots are technically able to represent Cyprus in competitive games but an amalgamation which sees the Northern Cyprus national team absorbed into the FIFA-affiliated side, thus signalling the death of the north as a footballing entity, seems out of the question, however far the relationship thaws at Zurich. But the lines of communication are open. In 2007 the CFA invited those founding members of their association now playing in the north to a ceremony to mark the opening of their new head-quarters, and though a proposal for re-unification was rejected by the government in North Nicosia in 2009 the meeting in Zurich offers a fresh round of hope that football in Cyprus might one day resemble, if not one body, at least a working co-operative. If the mediators are successful it will be the first time since 1955 that there will have been a definitive entity on the European landscape under the banner of Cypriot football.