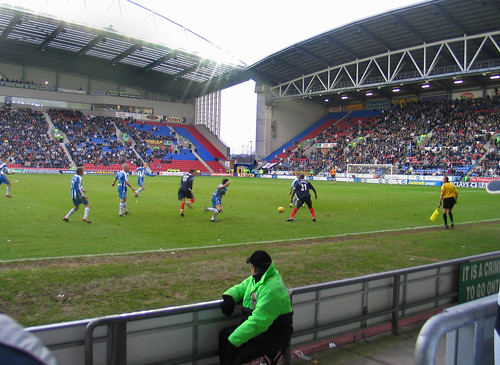 Anyone ballsy enough to put bets on Wigan to beat Liverpool, Manchester United, Arsenal and Newcastle must have won a decent sum – even more if they were astute enough to make use of the sports betting sites here. Wigan’s success in the second half of last season had a noticeable starting point though: a switch to a 3-4-3 formation. The inevitable question is whether or not others will try to replicate Wigan.

The three-man defences that were popular throughout the nineties disappeared as lone strikers became the norm, leaving too many spare men at the back while creating a shortfall elsewhere on the pitch. They popped up occasionally, mainly as defensive strategies, yet weren’t considered the viable standard gameplan they were previously.

However, there has been a recent renaissance of the back three in Italy. Udinese and Napoli played their way into competing with the big boys, then Juventus adopted a 3-5-2 for a large amount of last season on their way to the scudetto. What separated the new look back threes from the ones common in the nineties was that the three defenders have generally been good on the ball. Before, there had a rough two stoppers and libero model, whcih left a player redundant when he had no one to mark. When all the defenders are comfortable on the ball, the frees ones are able to move the ball forward and step into midfield to make up for any shortfall. Gian Piero Gasperini’s brief tenure at Internazionale proved it doesn’t work for everyone – you need the right players to make a formation work, it’s not a simple rock beats scissors formula – but that’s hardly news.

Its success in Italy didn’t necessarily mean it should just pop up everywhere else though. Part of the reason it worked so well in Serie A is that Italian sides struggle with width, making it easier for the wing-backs to get forward. This isn’t the case elsewhere, which has made Wigan so important.

The back three seems to have made its return as a response to how important full-backs have become when attacking, allowing them to station themselves higher up the pitch and giving them more freedom, with most of Roberto Martinez’s discussion focussed on them:

â€œWhen you play a 4-3-3, you rely a lot on the full-backs to get high up the pitch. You shouldnâ€™t look at a system as away to win a football match, it is the players that play the system. Maynor [Figueroa], Gary [Caldwell] and Antolin [Alcaraz] have been so solid with a back three, and it allows [other] players to be high up the pitch, like the wing-backs. They arenâ€™t full-backs that need to get deep and then forward to give us an extra man, they are in positions where they can do both a little bit better, and we can be a little bit more solid.

â€œThe difference is the width that we getâ€¦before, we had to compromise a little bit, when you want to be very attack-minded, the full-backs have to push on, so you leave two players at the back. Now youâ€™re still pushing the wing-backs on, but youâ€™ve still got three players at the back, plus probably a midfielder. In the West Brom game, as Paul Scharner will tell you, we were attacking with seven, eight, nine players and they were surprised it, and thatâ€™s what the system gives you, without being weak at the back.

â€œIt suits our players. When youâ€™ve got a Jean Beausejour who is a specialist in that position, you take advantage of that. The back three gives you that. Then thereâ€™s the energy weâ€™ve got in midfield, players who can play between lines like Shaun Maloney and Jordi Gomez. Itâ€™s so difficult to play againstâ€¦thereâ€™s a few clubs playing it around Europe now, Napoli are one: they play it with [Edinson] Cavani, [Marek] Hamsik and [Ezequiel] Lavezziâ€¦this is the advantage of this system â€“ it goes where the danger isâ€¦itâ€™s not in defensive lines, itâ€™s not working as a unit of four, itâ€™s not man-marking.â€

With extra men in defence, the backline can be flexible, with players moving across to cover one another. The only real shortfall is in midfield, where a five man midfield would outnumber them, but having the attacking wide players tuck in or one of the free defenders step up when needed provides a makeshift remedy.

When attacking, the less common shape makes it difficult for the opposition to press defenders. Playing against a 4-3-3 for example, the striker would only be able to mark one of the defenders, so the other two can pick up the ball and stride out of defence unopposed, making it easy to start attacks. If the wingers tuck in to ensure all three defenders are marked, then the wing-backs are free, and so on.

3-4-3 seems a better bet to work outside of Italy than 3-5-2, as it stops opposition teams from being able to overload on the wings – the narrow 3-5-2 similar to the 4-4-2 diamond that Carlo Ancelotti’s Chelsea used until opposition caught them out on the wings. It also offers a quick attacking outlet – Victor Moses’ runs in behind the full-back were one of Wigan’s biggest threats. In addition, as Napoli have shown, those wide players can tuck in when they wish to play more patiently.

â€œIn a yearâ€™s time, there will be a lot of teams playing a 3-4-3, believe me,â€ Martinez claimed. â€œAnd weâ€™ll have to be able to change, to adapt to it. And that is why itâ€™s so important that players are flexible tactically.â€ Whether or not other coaches do adopt the tactic depends on two things: simply whether they have the confidence to do so and if they can find enough ball-playing defenders to make it work. In the current tactical climate though, it would certainly make sense.