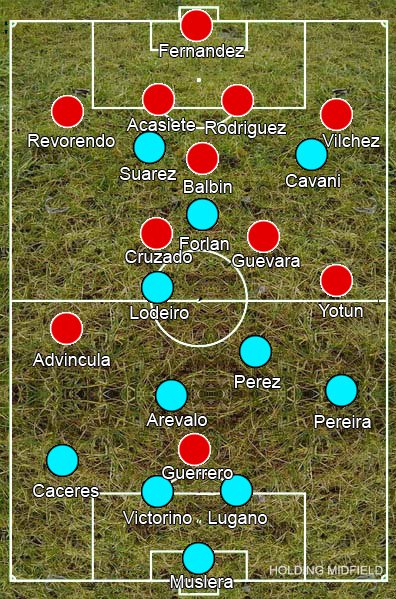 Having dispensed with hosts Argentina, Uruguay went into their semi-final against Peru having to switch up their style. Previously, they had defended resolutely to contain Argentina, but here, as favourites, it was Oscar Tabarez’s side who would have to attacking control. Which they did, albeit with some help from the Peruvians.

Sergio Markarian made some interesting changes to his side. Out of possession, the side resembled something of a 4-4-1-1, although Juan Vargas stayed wide left rather than directly behind Paolo Guerrero, meaning Peru were playing three left-sided players. When they got the ball, it became more a 4-3-3, with Adan Balbin holding, Yoshimar Yotun tucking inside a bit on the left, Luis Advincula pushing up down the right and Paulo Cruzado trying to link play in the middle.

Tabarez also adapted his team, setting up in a 3-5-1-1 formation, essentially creating a six man defensive platform for Diego Forlan, Luis Suarez and wing-backs Maxi and Alvaro Pereira to create from. It generally worked: when defending, Uruguay would sit off, inviting Peru to play in front of them, but they wanted to play it direct to Vargas or Guerrero. Those two were rarely going to win a battle against six men, so Peru were effectively surrending possession whenever they got it.

They were also surrendering ground to Uruguay, allowing them the space to create. Uruguay realised early on the importance of their wing-backs in stretching play – at one point, Alvaro Gonzalez filling in at right-back to allow Maxi Pereira to remain as the highest man up the pitch – and they showed why, the Pereiras looking the most dangerous players on the pitch. With Advincula also often slow to track back, Peru’s midfield regularly looked stretched trying to help with the attacks from wide, leaving gaps in the middle that none of Uruguay’s midfielders could really take advantage of. The introduction of Nicolas Lodeiro could have solved this problem, and probably given Uruguay their first goal sooner than the 53rd minute. As it was, they were threatening but not actually creating any clear cut opportunities.

Recognising they weren’t looking a forced in the centre, Markarian switched Yotun and Advincula around so they weren’t on their natural sides. The logic was sound, but, in practise, it wasn’t. Advincula is a more attacking player, so he was now operating in Vargas’ preferred space – he had looked dangerous on the right, but didn’t suit the new role and lost his influence on the game.

Despite Uruguay’s dominance, Suarez got his opener out of nothing. Raul Fernandez spilled a long shot by Forlan that was going wide anyway, and Suarez had made a well-anticipated run, allowing him to squeeze in a shot from a tight angle. Markarian reacted immediately, throwing on the more attacking William Chiroque for Yotun, and moving Vargas into a more central role to make a 4-2-3-1. Peru were then caught out attacking and a ball in behind Peru’s high line let Suarez grab a second.

A silly swing of an elbow earned Vargas a red card, making Peru’s almost impossible job even harder. With a guaranteed spare man somewhere on the pitch Uruguay upped their pressing, presumably thinking they could cut apart Peru once they got possession, looking to attack quickly, also often giving the ball back to Peru quickly. Despite losing their best and most creative player, Peru appeared determined after the sending off, generally controlling the attacking play of the rest of the game with some neat pass-and-move play, having ditched the direct style for a more patient build-up at half-time. Crucially, they didn’t score though – although they upped their game, Uruguay’s defensive base is strong and truthfully they never realistically looked like scoring.

Uruguay continue onto the final where they will be favourites regardless of who wins out of Paraguay and Venezuela, and for good reason: they remain strong defensively, good, if sometimes a little undermanned, going forward and also very flexible tactically.