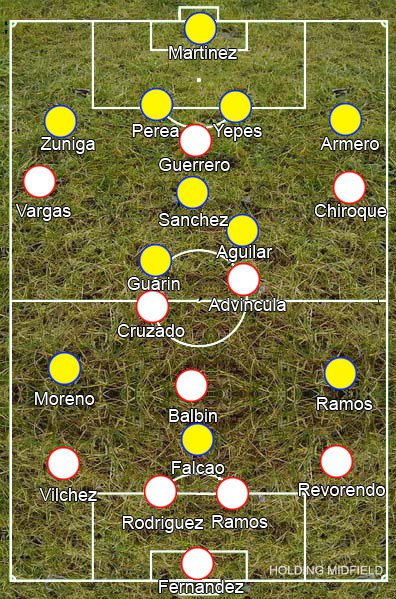 Almost ten years to the day after Colombia defeated Peru 3 – 0 at the same stage in 2001, Peru have successfully navigated a quarter final in the Copa America after being defeated at the same round in the four previous tournaments.

Colombia, after finishing top of, and undefeated in, Group A were the favourites going into the tie against Peru, who got through as the best third placed team, from Group C. HernÃ¡n GÃ³mez selected the same starting XI as in the previous three matches, whereas Sergio MarkariÃ¡n re-instated most of the Peruvian side after resting players in the final group game against Chile.

Colombia played in the same way they did through the group stages, in a 4-3-3 with Carlos SÃ¡nchez acting as the defensive pivot in midfield, whilst Abel Aguilar and Fredy GuarÃ­n were given licence to join andÂ supplementÂ attacks. One of the key differences, however, was Dayro Moreno and AdriÃ¡n Ramos who both played as outside forwards, but Ramos generally found himself playing more centrally and in front of the backline.

Peru also lined up in a similar way to how they played in the group stages, broadly shifting from a 4-5-1 without the ball to a 4-2-3-1 when they did, with an emphasis on getting the ball to star man Juan Vargas down the left flank. Peru looked to sit deep and constrict space, causing many Colombian attacks to stagnate with Colombia finding it difficult to get behind the Peruvian defence.

The obvious trends through the match were primarily that Colombia looked the more likely to make something happen, but lacked the final ball, but wereÂ unfortunateÂ on several occasions as they hit the woodwork. They looked more likely to create something when GuarÃ­n and Aguilar stepped out of midfield and joined the attacks rather than just supporting them, but without natural wide men the Peruvian defence was rarely stretched, aside from a couple of occasions, although that was through Peruvian mistakes more than Colombian incisiveness. The main chances that Colombia created for themselves were from when they caught Peru out of shape, by either playing long balls – which Mario Yepes looked to do more often from the 60th minute mark – that often caught Peru’s backline with a defender deeper than the other three, by winning the ball back high up the pitch or from a set piece.

Peru, meanwhile, found it difficult to find a platform to build from. When they had the ball AdÃ¡n BalbÃ­n and Rinaldo Cruzado sat deep, with Luis AdvÃ­ncula – and later Carlos LobatÃ³n – the player designated to go forward and try and join attacks, but the majority of the play came down the flanks for them, with Paolo Guerrero generally being dragged left to link play with Vargas, meaning Peru often lacked a player centrally. Indeed, aside from shots from distance, Peru didn’t create any chances in the entirety of the 90 minutes. They did, however, look likely to create chances when they pushed Colombia high up the pitch – which they did when they were caught with too many players forward – but they didn’t do it enough and the final ball didn’t come off when they did win the ball back.

The biggest chance in the match fell to Colombia from the penalty spot on the 64th minute mark. A long ball from Yepes caught Alberto RodrÃ­guez too deep and he played Dayro Moreno onside before bringing him down with a clumsy tackle. The penalty was left to Porto forward Falcao, who was seen as the brightest light in this Colombian side, but he hit his shot wide of the post, and he shrank as a force after. The other good chance for Colombia came in the final minute of the game through a piece of individual skill from GuarÃ­n, who evaded several Peruvian tackles before his shot was tipped on to the bar by RaÃºl FernÃ¡ndez, whilst there was also a decent chance for substitute Hugo Rodallega in extra time while it was still 0-0 following a counter attack from a Peru free kick.

But in extra time it was two mistakes, from Colombian goalkeeper Neco MartÃ­nez, that gave the game to Peru. First, a Juan Vargas free kick that was crossed into the box was dropped by MartÃ­nez, who was powerless to stop LobatÃ³n smashing the ball home from the edge of the box. Then, the second goal came from the result of a poor decision to try and pass the ball to Luis Perea, which fell to Guerrero who got into the box and squared it to Vargas to finish emphatically.

What was a war of attrition between two very well organised sides could have been decided by a mistake from RodrÃ­guez, but his blushes were saved by Falcao and, then later, MartÃ­nez, and Peru will be looking forward to a first semi final in the 21st century.