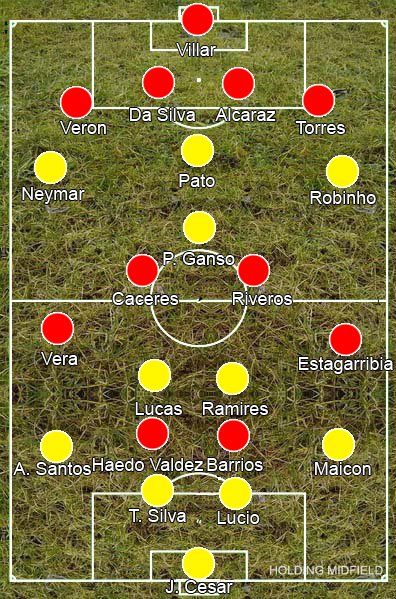 Eight days before, Paraguay had outplayed Brazil only for a late goal from Fred to rescue the Selecao a point. However, only one side could get out of this quarter final with anything, and that team was Paraguay.

Mano Menezes continued with the set-up that been successful against Ecuador: a 4-2-1-3 that allowed the front four freedom to create, while the rest of the team sat deep except for Maicon and sometimes Andre Santos, who would provide width from full-back.

Gerardo Martino made just one surprise change, dropping Nestor Ortigoza for Victor Caceres in the centre midfield of his 4-4-2.

The Paraguay front four started the game pressing Brazil’s defence, while the rest of the team sat deeper. When Brazil’s defenders managed to pass it forward, they were able to find a good amount of space to work in but the pressure being put

Paraguay were invited into playing a slower passing game by Brazil’s passive defending, but using a more direct style suited them more. The pitch in La Plata was fairly cut up; Brazil seemed to cope with it well, but Paraguay were struggling, often misplacing passes, and their long balls forward were regularly scuffed. Ortigoza’s presence was certainly a loss for Paraguay going forward, so, despite his replacement Caceres having an good game defensively, it was a surprising he wasn’t brought on at some point.

They have had the occasional lapse in concentration, but generally Paraguay had looked far more organised defensively beforehand than they did in this game. The full-backs would often tuck in to make a very narrow back four, so any movement from wider positions, either from Maicon and Andre Santos or by the forwards moving towards the edges of the area, would generally result in a shooting opportunity for Brazil. Fortunately for Paraguay, Justo Villar was having a brilliant game.

In the second half, Brazil upped the ante, spending the majority of the half camped in Paraguay’s territory, but still didn’t get a goal. Eventually, Fred was brought on for Neymar giving Alexandre Pato a partner up front and Brazil a more natural striker leading the line.

Still nothing really changed: Brazil attacked but could find no breakthrough, and Paraguay seemed happy to just hold on. The harsh sendings off of Lucas Leiva and Antolin Alcaraz after a scrap neccessitated some changes in shape, but the overall pattern of play didn’t change at all, and so it went to penalties.

Credit must go to Villar – it was probably Paraguay’s worst defensive (and certainly attacking) performance yet, without him there was no way they would have got through. Brazil were the ones that really deserved to go through based on their performance in open play, but poor penalties, made worse by the awful pitch, meant the holders exit.