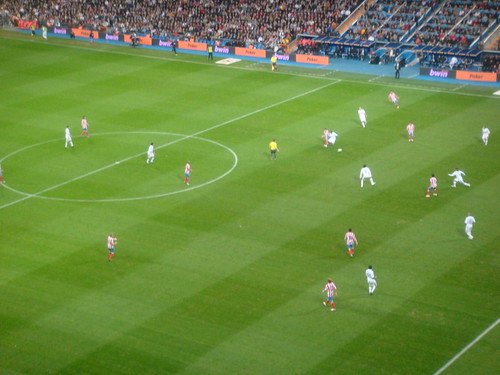 About a year ago, we highlighted some similarities between the Real Madrid of today and the Galacticos of Florentino Perez’ last spell as president. Them winning their tenth Champions League would seem to disprove the idea but after their transfer dealings over the summer. In retrospect, Gareth Bale’s signing was the equivalent of Ronaldo rather than David Beckham – an upgrade over Fernando Morientes that took them to the 2003 La Liga title.

Importantly though, they didn’t lose their Claude Makelele last year. Although Mesut Ozil was a key player, he never did much defensive work and Bale offered more attacking threat than the German provided. The balance of the team was kept in check by the trio of Xabi Alonso, Angel di Maria and Sami Khedira (Luka Modric appeared more frequently than Khedira but the point regarding Khedira’s role balancing the side still stands) – none of whom played the one man defence Makelele frequently had to but offered far more going forward.

Like in that summer of 2003, the scale’s tipped too heavily in favour of the attack. Alonso left for Bayern Munich, Di Maria for Manchester United and Sami Khedira looks unlikely to start regularly after being tipped for a move away all summer, with Luka Modric and Toni Kroos looking the likely first-choice pair despite neither being notable defensively. Asier Illarramendi could come in to the base of the midfield but that would mean leaving out 2014’s big obvious Beckham. On the back of starring at this summer’s World Cup, it was obvious James Rodriguez would be highly sought after, yet there’s no real place for him in Real Madrid’s starting eleven.

While Florentino Perez was reconstructing a team in his image, Diego Simeone was patching up the side built in his. The biggest club in the world have long been obsessed with celebrity and individualism but smaller city rivals Atleti one-upped them in the league and came within minutes of one-upping them in Europe last season by playing in the same tenacious, positionally aware and, most importantly, snide way their coach did. From front to back, the Atletico players have bought into the idea of playing as eleven Simeones. 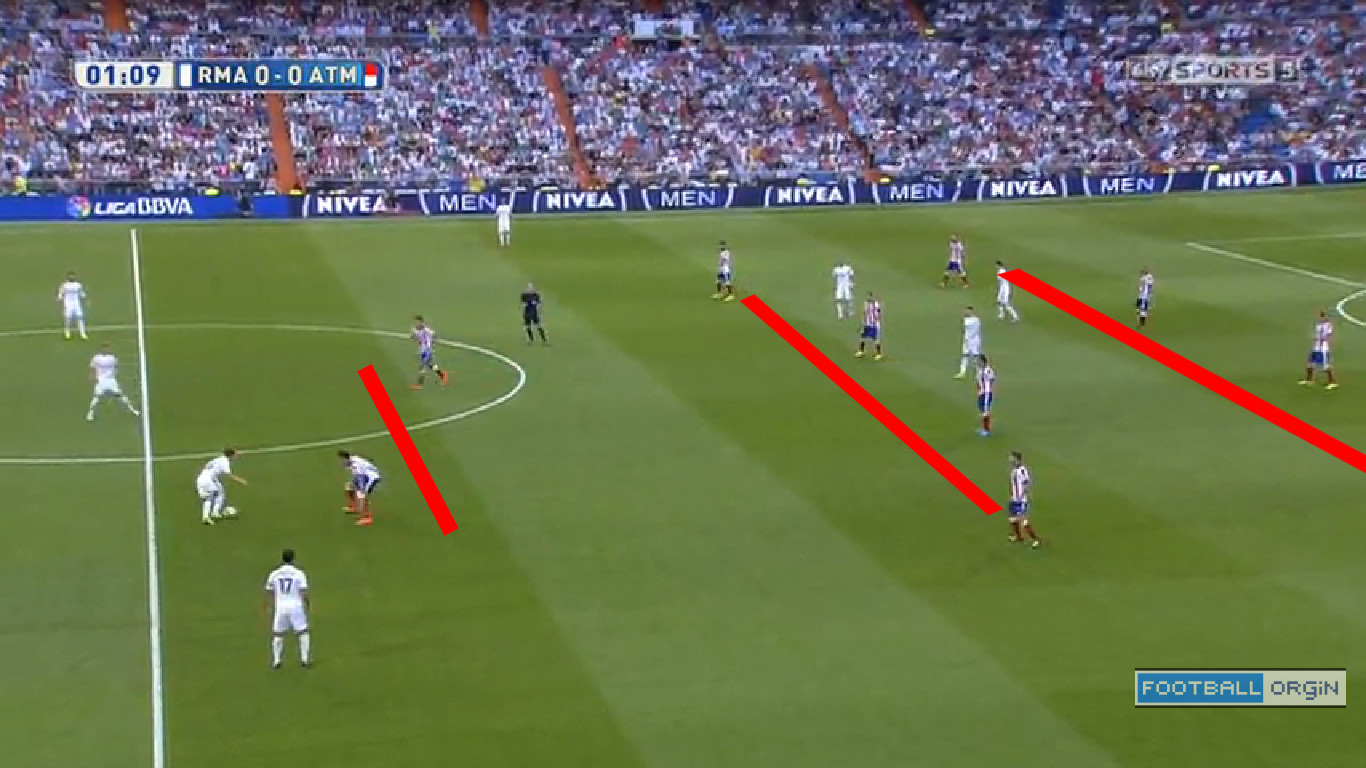 They set up in two deep and narrow banks of four, letting their opponents have the ball in their own half but pressing intensely when they venture past the half-way line. In much the same way as playing a high line shortens the playing area by making a large portion of the pitch offside, sitting deeper essentially forces the opponents to shorten the pitch themselves by bringing the ball and their team forward, restricting the playing area to one half, with the other half a huge potential gap in behind to exploit on the counter.

Such a narrow midfield obviously makes the middle congested, and, with the banks of four close together, even if it it is played through there is no space for the recipient to turn or pass themselves. Where there is space however, is out wide.

By congesting the middle and ceding the flanks, Atletico bait their opponents into an area where they can be easily boxed in. In the centre, you can head in any direction, but if you are out on the left flank you can’t go left and if you are on the right flank you can’t head right. By forcing them wide, they force their opponents into halving their passing options. Once the ball heads out in this direction, the Atletico players rush across to close them down, with several covering, meaning the opposition player frequently finds themselves surrounded by three or four players when they had been completely free moments before.

It’s worth pointing out the following example comes from a quick Real Madrid free-kick from deep, meaning they are essentially trying to catch out Atletico high up the pitch with this attack. 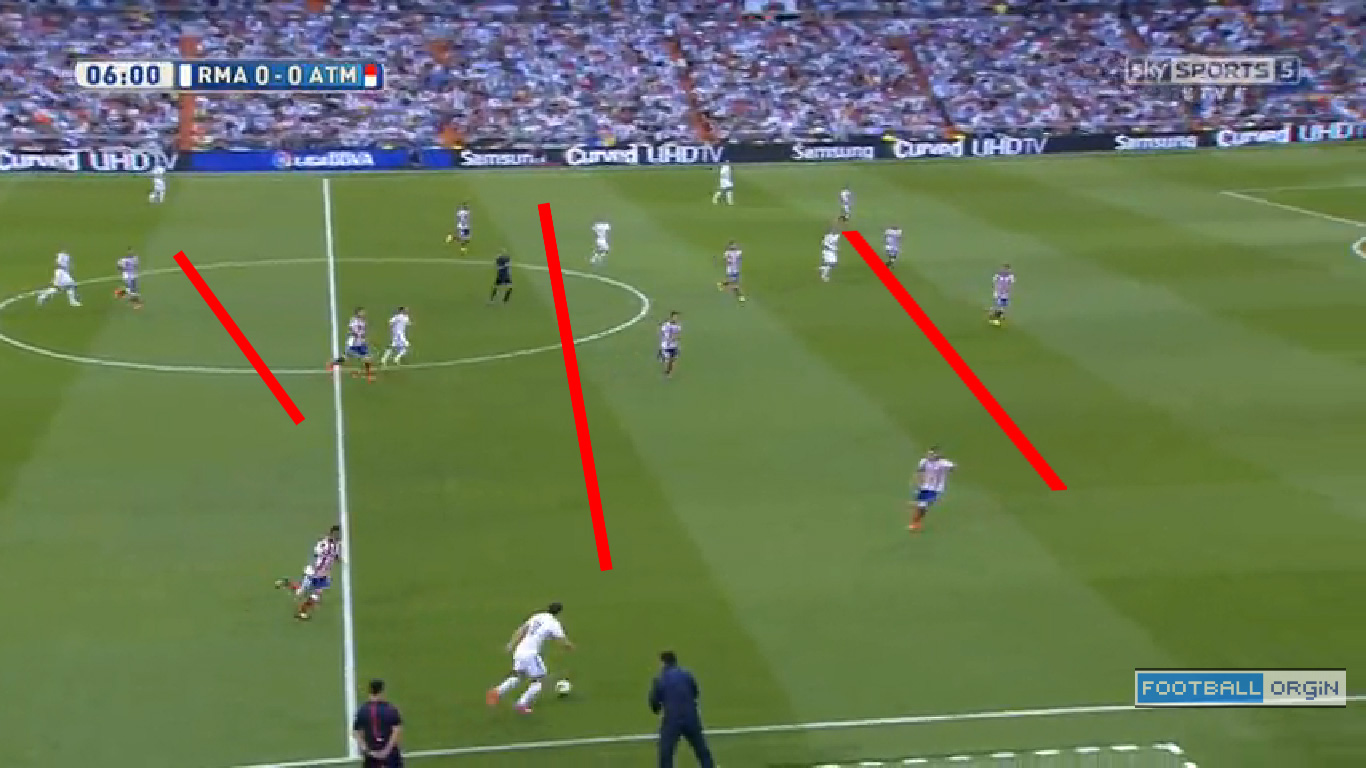 Bale receives the ball out on the right with Atletico players not quite in position but still with their rough shape visible. 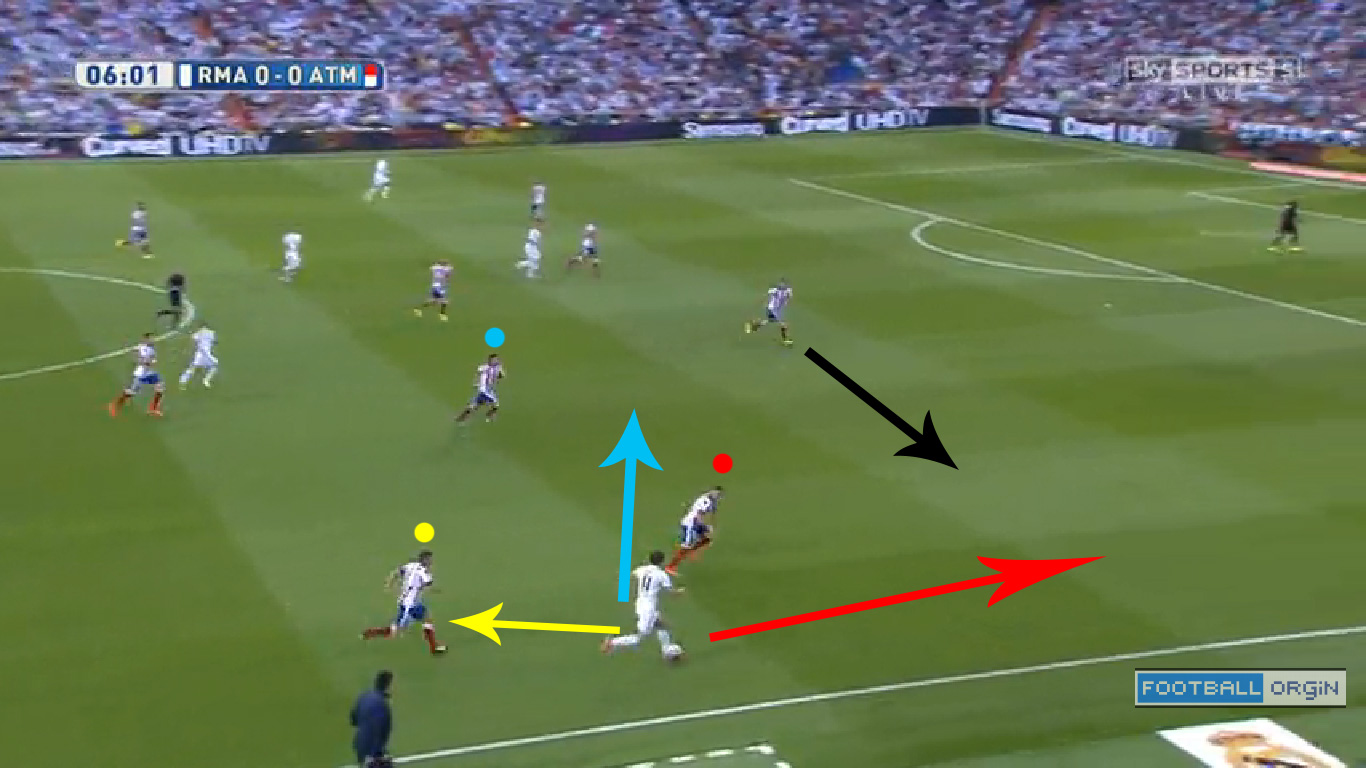 Guilherme Siqueira (red) closes him down while Diego Godin (black) comes across to cover, Tiago (blue) offers cover inside and Koke (yellow) ensures he can’t turn around and play it back. 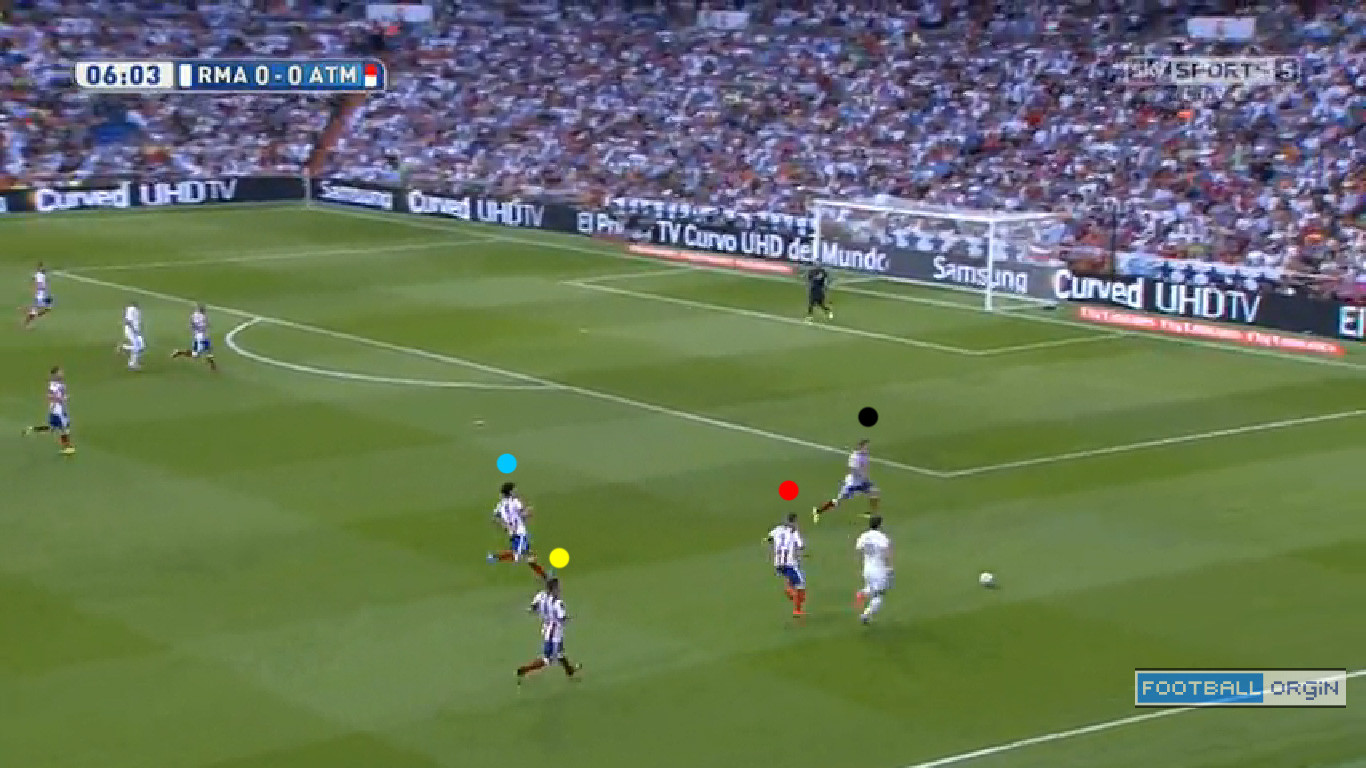 Initially with plenty of space, Bale’s been isolated and Godin collects the ball.

There’s two notable weaknesses to this approach. Firstly, sitting so deep makes any mistakes much closer to goal, therefore more costly – as evidenced by Real’s goal, a penalty won by Cristiano Ronaldo running atÂ Siqueira in the box. Dribbling at players is a great way to break down deep defences as it forces them into a challenge, meaning they either win the ball, have the man go past them or concede a foul.

Secondly, it’s difficult to keep fit enough to do this over 90 minutes, especially when a team like Atletico don’t look to keep the ball for long periods of time. Constantly rushing out to the sides will gradually wear out the defenders, so the options are to either spread the line out further apart so they are closer to the wing and don’t have to dash as far, opening up space in the previously congested middle, or staying narrow and giving the opposition wide player more time to pick out a good ball inside. The Champions League final provided an excellent example, with Atletico almost keeping Real at bay over the 90 minutes but collapsing when that stretched to 120.

However, when compared to Real Madrid’s defending for the winning goal, Atletico seem faultless. 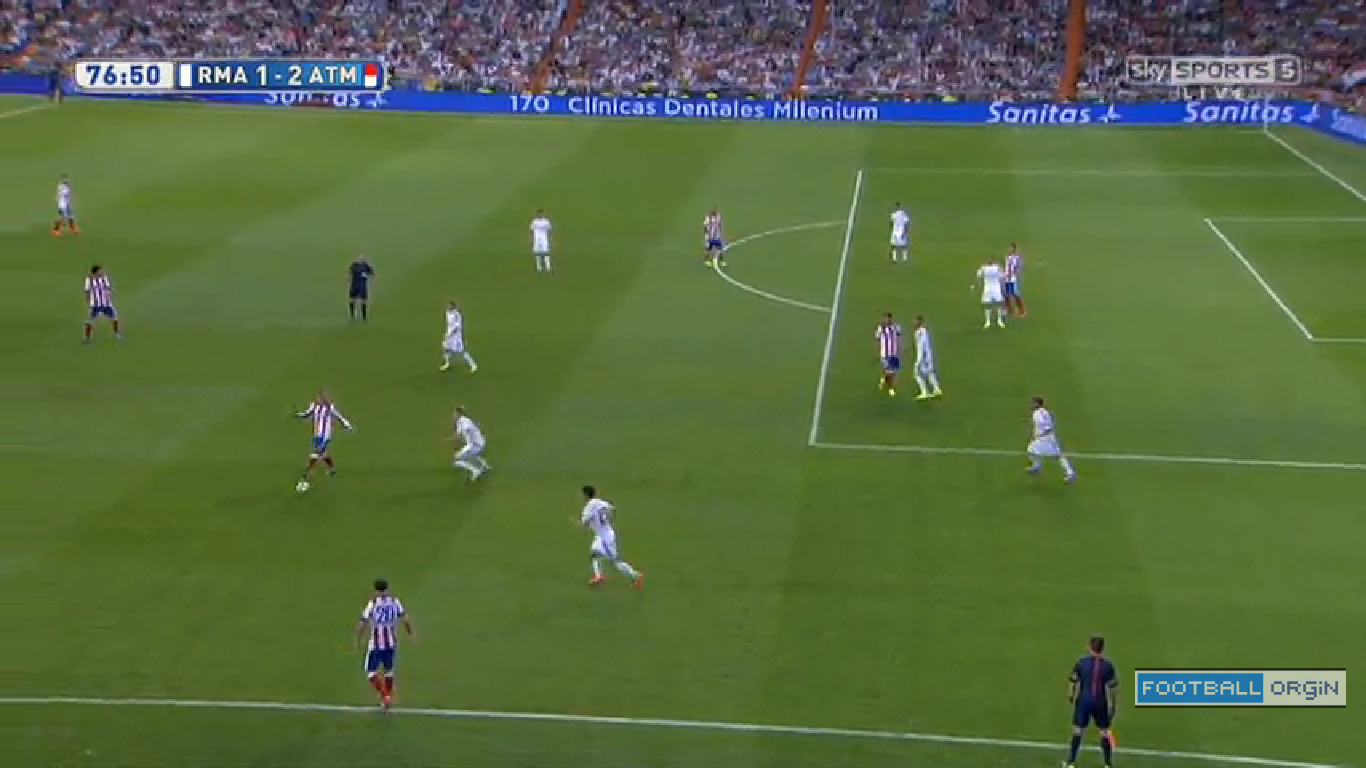 Antoine Griezmann receives the ball from a throw-in. 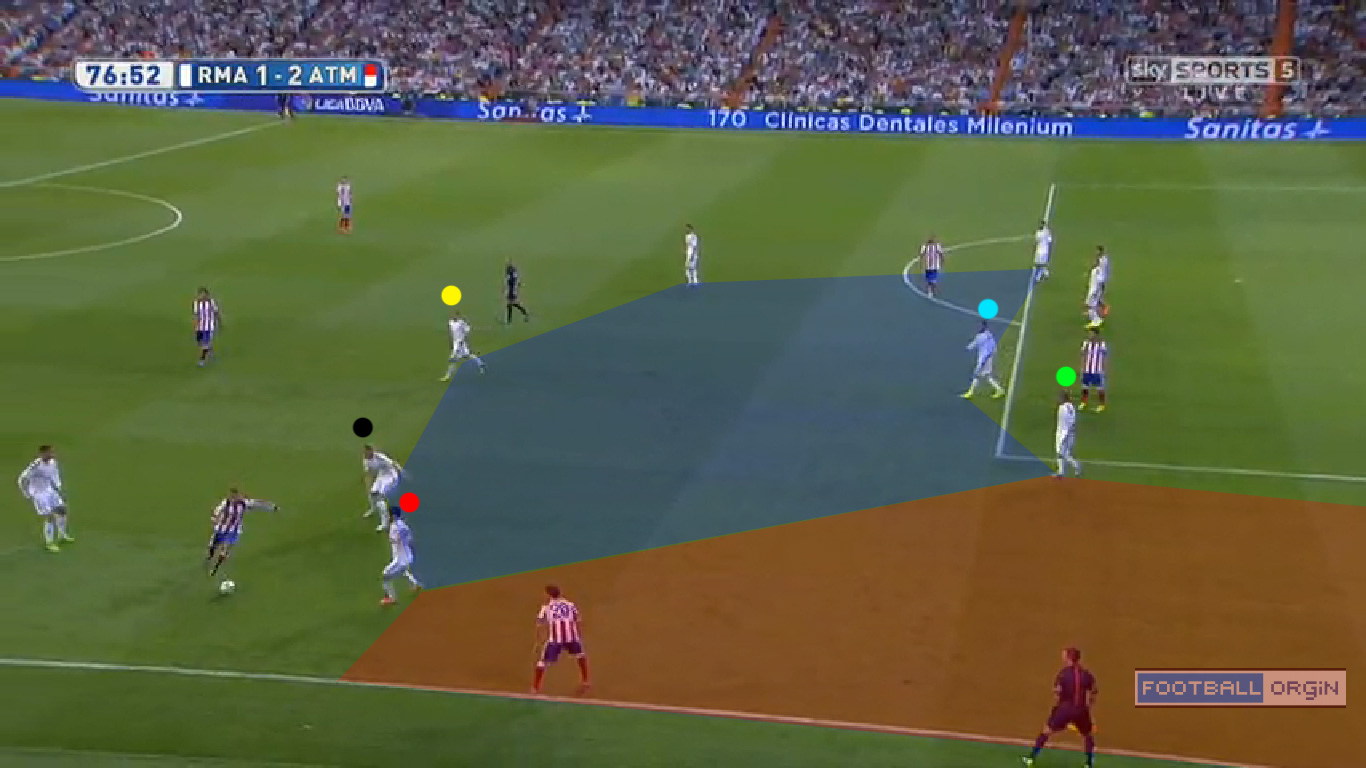 Griezmann escapes Kroo’s (black) weak attempt at a tackle and Isco (red) steps up to try to trap him, leaving Juanfran free in the red space. This could have worked had Fabio Coentrao (green) pushed out towards the wing to put pressure on Juanfran, but with him where he was the attempt to trap Griezmann didn’t work at all – Griezmann played it along the ground to Juanfran, yet, even if he had been boxed in better, he would have been able to chip it over for the right-back because he has so much space to bring the ball down in.

Modric (yellow) has also pushed up further than he should have. He initially moved forward when it looked like Kroos might win the ball back, yet didn’t move back when Griezmann came away with it. Giving him the benefit of the doubt, it’s possible he’s moving up to block off the pass inside to the midfield, but given the defenders behind him aren’t offering any pressure on the ball (Coentrao going out to Juanfran), his concern should be with covering behind Kroos. Even if that ball is played inside, it’s not in a dangerous area, so he’s being unnecessarily brave in his positioning, leaving the blue area free.

There’s also the sloppy defensive line. At this point in the play and having just come off a throw-in, it’s not as bad as it looks from this picture, but Sergio Ramos (blue) stepping up causes problems later. 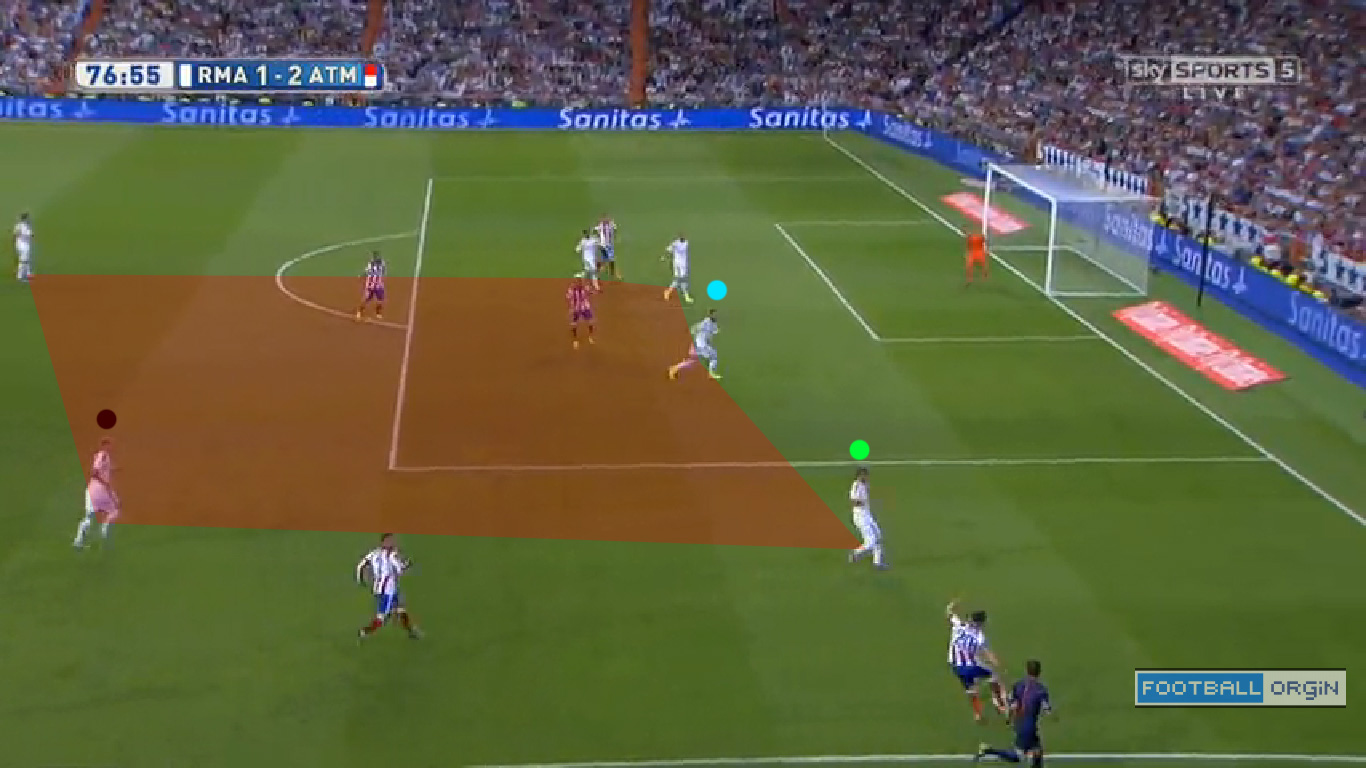 With so much space, it’s little surprise that Juanfran is able to pick out a perfect pass. Modric is nowhere to be seen, leaving a huge space for Atletico to attack behind Kroos. Rushing to get back in line, Ramos’ body shape is also terrible here, requiring him to turn a full 180 degrees if he wants to defend against those attackers near him. 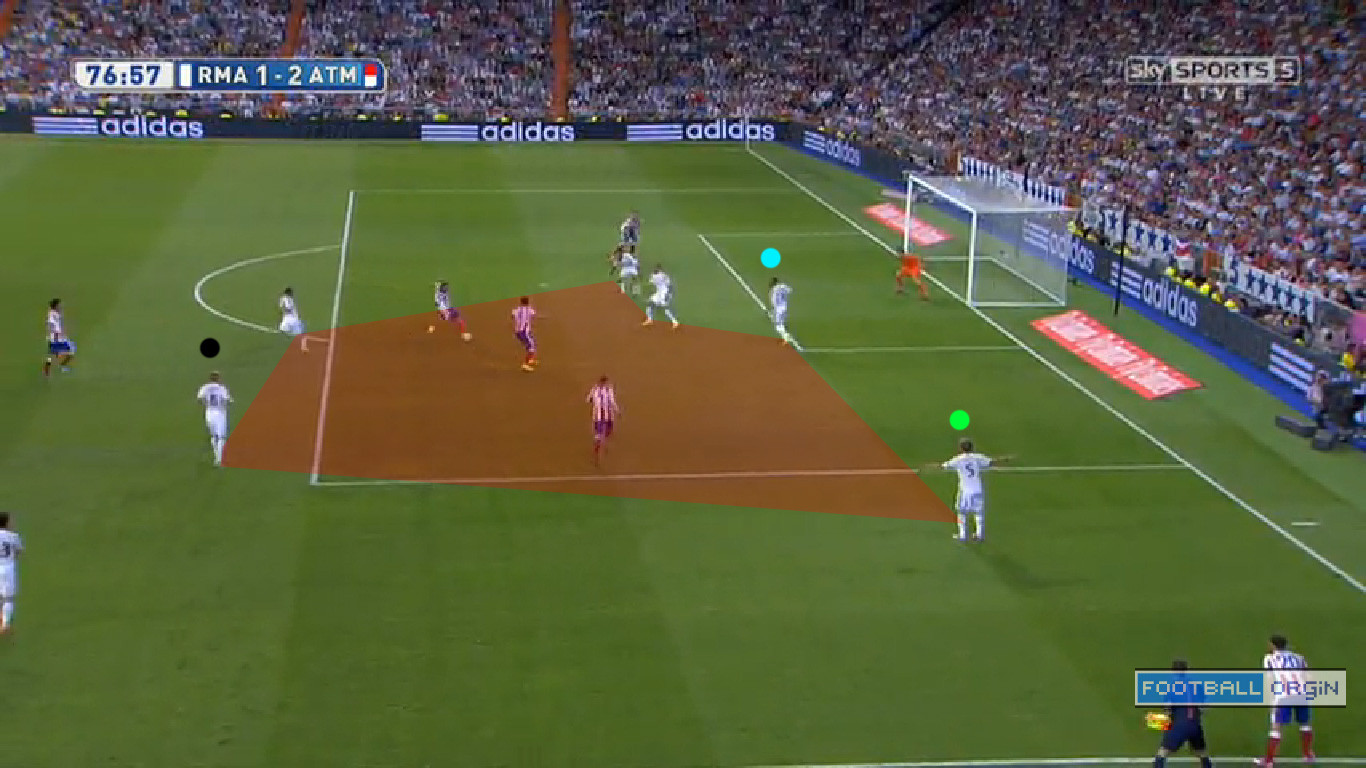 Raul Garcia is clever to dummy it for Arda Turan behind him, but truthfully either of them probably would have scored. Modric remains completely out of the picture and Ramos has gone from by far the highest to the deepest defender, leaving him in no position to challenge.

This wasn’t even a good performance from Atletico. They were continuously poor in possession, giving it away cheaply or sending aimless long balls forward, and yet they came away with all three points away from home. The complete lack of confidence in Iker Casillas’ ability to defend set-pieces means the box is flooded with Real Madrid defenders, none of whom looked like they knew what they were meant to be doing as Tiago’s opening goal flew past them, and they don’t have any decent defenders in midfield.

3 thoughts on “Contrasting defending in the Madrid derby”