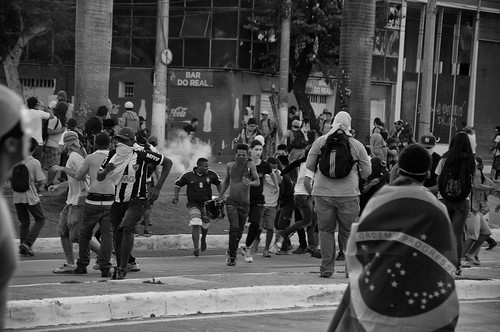 Anyone following the FIFA PR machine as it trips and skids its way through its response to the chaos unfolding in Brazil could be forgiven for thinking weâ€™re in pantomime season. As the Confederations Cup quickly turns from close-season money spinner into a full frontal exposure of a nation in crisis the villainous outline of Sepp Blatter looms large over the country; meanwhile self-appointed spokesman for the occasion Jerome Valcke staggers around like the back end of a tandem horse, pulled this way and that by a nationwide protest movement that threatens to boil over. With the World Cup still to come in 2014, an extended run looks likely.

That the governing body have failed to really appraise their own role in the meltdown shouldnâ€™t really come as a surprise. In a year that has seen an ethics committee, set-up to guide the Executive Committee towards a semblance of order, fall on its sword in despair at being unable to make itself heard by a grandiose and self-serving autocracy itâ€™s hardly surprising that the big-wigs in Zurich see themselves as the victims whilst a country creaks and groans under the unbearable pressure of two tournaments hopelessly beyond their means to pull off.

The issues that have brought tens of thousands to the streets in protest are a complex product of a failed relationship between a country and its leaders but the part that concerns FIFA is reducible to an easy to understand formula. The people are keen to know why they are being forced to invest $13bn from the public purse in a product that is projected to earn $4bn for the world governing body, whilst domestic transport, health and welfare structures suffer through chronic under-investment. Itâ€™s an arrangement, just like all World Cups, whereby the host nation puts up the capital for the leadership to cream off the returns. The real wonder here is how itâ€™s taken until 2013 for a mass consciousness to develop that the books donâ€™t balance.

FIFA have been quick to quash any suggestion that their presence has in any way stoked the flames, General Secretary Valckeâ€™s protestations that â€œthis is not the fault of FIFA. This is a Brazilian problemâ€ lacking in humility, but compensating with all the bombastic pomp that so often follows these moments of finger-pointing from the worldâ€™s media. All the PR in the world though canâ€™t save the Exec Com from what is becoming an increasingly transparent truth â€“ footballâ€™s role as the great social pacifier is looking shaky and without it FIFAâ€™s role as an institution beyond reproach cannot any longer be guaranteed.

Head coach Felipe Scolari is just as culpable of sticking his head in the sand. His remarks that a Brazilian victory over Uruguay could go a long way towards settling the public displeasure fail to factor in that football, so often a social tonic, can only be so when it offers a common escape from the day to day of public grievance. The problem now is that the game with which Brazilians share such a romantic history is at the very heart of the upset.

Until now the vocal criticisms of FIFA have tended to stop there. They are the institution about which no-one seems to have a good word to say but by whom nobody is troubled deeply enough by to take corrective action. Their approach to international competitions is enough to keep broadcasters and construction firms smiling around the world and whenever the public conscience is troubled by horror stories about chronic mismanagement and corruption there will inevitably be institutions at home more deserving of the domestic scorn, simply because they impact more closely on day to day life. The FIFA autocrats bed down in their bunker and wait for footballâ€™s irrepressible message of unity and hope to save the day.

In Brazil this summer weâ€™re seeing a new breed of mass protest. Never before has the worldâ€™s most popular game incited such a conspicuous and apparently organised reaction from a resistance movement, and never before has the notion of being unified by football carried such a destructive undertone. And never, not throughout its tumultuous history as a body riddled with self-interest and wince-making corruption, has FIFA been so firmly in the sights of a movement so ready to get up and shout about it. If a wedge really has been driven between the Brazilian people and the game with which they have become so synonymous, and that relationship has been soured as irreparably as the images beaming around the world suggest, how can this spell anything other than the beginning of the end for the hegemony of the Blatter years?

The governing body might stand half a chance if its mouthpieces showed an ounce of acknowledgement, in the light of mounting evidence, that they arenâ€™t the benevolent presence in Brazil that all their sermonized dogma attests to. Perhaps if they left one of their host nations with more of a legacy than the herd of white elephants that lie peppered across South Africa like space age grave stones, making more transparent use of the galactic investments their government partners make in the name of FIFAâ€™s big four-yearly pay day, they might go some way towards reassuring domestic audiences that their taxes are being invested for the public good.

2013 has offered FIFA its most concrete chances to show that it is serious about reform and yet its reputation has never been more tarnished, confidence in its ability to grasp the nettle of social and corporate responsibility never shakier. The message coming out of Brazil is that people will gladly turn a blind eye to brazen mismanagement as long as it doesnâ€™t clash with the national interest. Footballâ€™s governors are learning for the first time that their brand isnâ€™t fool proof â€“ or riot proof â€“ and the days of plundering a nation to its depths for the sake of easy returns may be coming, rather violently, to their end.