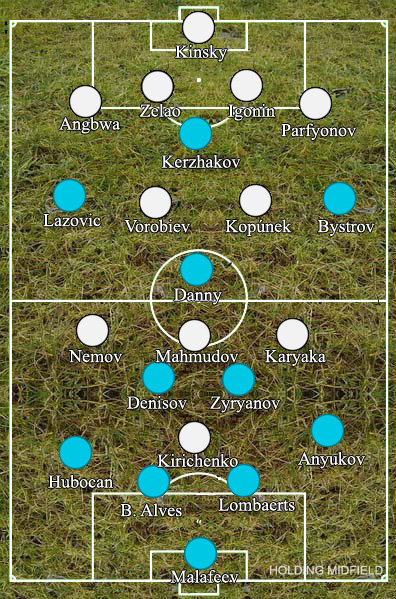 Zenit continued their seemingly unstoppable march towards the Russian Premier league title with a 6-1 rout of Saturn, taking them four points ahead of Rubin Kazan with two games in hand.

The teams had some similar aspects to their gameplans: Zenit lined up in what resembled a 4-2-1-3, with Saturn in a 4-2-3-1; Zenit pressed high up the pitch, while Saturn sat in their own half then pressed once their opponents entered their half. The idea behind this is sound – by pressing, they are giving Zenit less time and space on the ball and, by only doing so in their own half, they conserve energy and are able to sit deep, denying Zenit space in behind – but it negates some of the benefits too.

While pressing high up the pitch allows more space for the opposition, it also allows you to win the ball back closer to goal, making it easier and quicker to create goalscoring opportunities. Saturn very rarely passed the half-way line, let alone threatened, and a large part of this was due to Zenit’s hounding of Saturn when they lost the ball, as well as them only winning it back deep in their own half.

Equally, sitting deep allows you to stay compact and keep shape. By breaking ranks to press the opposition you are leaving gaps to be exploited. Saturn found this out early when a simpled dinked ball over the top from Danny gave Danko Lazovic a goalscoring opportunity – had he squared it to Aleksandr Kerzhakov, they would have been behind within five minutes of kick-off. A few minutes later Dmytro Parfyonov rushed out to confront Vladimir Bystrov, who passed it into the massive vacated space for overlapping Aleksandr Anyukov to attack from wide; another warning for Saturn.

What’s more this attempts at disrupting Zenit’s passing clearly didn’t work. As you would expectÂ from a Spalletti team, Zenit are very comfortable in possession and good in tight spaces, so the pressing didn’t really effect them.

This right-sided combination between Bystrov and Anyukov was a good attacking source for Zenit. Much like West Brom against Chelsea at the start of the season, Saturn’s band of three played narrowly – presumably to congest the midfield and disrupt Zenit’s passing – which allowed Zenit’s full-backs to bomb forward. Understandably, natural centre-back Tomas Hubocan was reluctant to get forward down the left because that’s not where his strengths lie (although Danny was happy to drift wide to make up for this limitation), but it seems odd to give so much freedom to the best attacking full-back in the country.

More often than not, Bystrov and Anyukov would team up on Parfyonov and beat him easily. The opening goal came from him diving in and missing, Bystrov, with all the time in the world, calmly delivered a pinpoint cross for Kerzhakov to head in. For a team with a previously very good defensive record, the positioning of the central defenders was absolutely awful – both were distracted by the runs of other players, but there needs to be some sort of communication between them to solve these situations.

Kerzhakov was still left with a lot to do though, pulling off a brilliant looping header. The Russian showed why he’s rated among the best in Europe in his homeland. Kerzhakov’s everything you’d want from a lone striker: a pacy, strong, intelligent runner who’s comfortable to drift wide or link play and is better in the air than he should be at 5″9. His first goal was a lovely header; he set up Lazovic with a great run down the right between the centre-backs, delaying until the right-back had come across to cover, leaving the Serb with an open goal; his second was a simple tap-in from some poor Saturn defending; his third was a brilliantly cushioned first touch with a perfectly placed finish in the bottom left corner.

Trailing behind, Saturn started to press higher up the pitch. This caused their goal – under pressure, Hubocan committed the cardinal sin of passing the ball across Zenit’s goal and Dmitri Kirichenko was on hand to tap in – however, it also allowed Zenit to play round them, absolutely slaughtering them.

The game died out and, although Zenit had some defensive hiccups that can most likely be put down to complacency, Saturn rarely threatened.

Zenit were brilliant and it’s extremely unlikely that anyone will stop them winning the league this season. Although it’s nice to see Auxerre in the Champions League, it’s a shame we won’t get to see anything of Zenit on the biggest European stage – though the Europa League should be made all the more interesting with their inclusion and you can probably expect to see a fine-tuned version next season. Definitely something to look forward to.