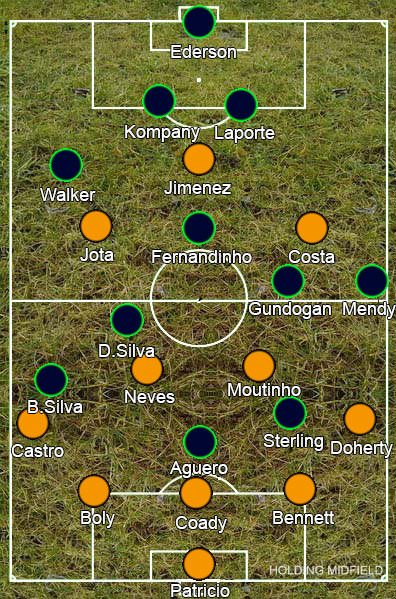 Manchester City looked to maintain their 100% record as they defend their Premier League title, while Wolverhampton Wanderers are still looking for their first win in the top division after storming their way to the top of the Championship last season.

Nuno Espirito Santo set up his side in a 3-4-3 formation, whereas Pep Guardiola opted for his usual 4-3-3, although obviously there was some tinkering due to him picking specific individuals.

Typically last season Guardiola opted for two out and out wingers, with the midfielders pushing up between the lines and the full-backs tucking inside behind them, whereas in this match Bernardo Silva hugged the touchline on the right but Raheem Sterling tucked inside from the left, with Benjamin Mendy pushing up to provide the width on the outside, while Ilkay Gundogan held back behind him. It makes that same W-M shape but using players that play nominally different positions to the usual choices.

The match fell into the same pattern as most City games do, with the opposition dropping back into a deep defensive shape to force City to play through them, however Wolves were far more competent at this and aggressive than most teams making for a much more interesting game.

Wolves would drop into a narrow 5-4-1 shape, with Raul Jimenez moving from side to side to ensure the centre-backs couldn’t play a pass into Fernandinho and the midfielders on hand to surround him if he did manage to receive it – the compactness of the midfield meaning he often had five players close enough to press him.

The midfielders would also position themselves to cut off passes into the attackers behind them, requiring good understanding with one another due to the constant movement of the City frontline – for example, Ruben Neves would typically be cutting out the passing lane into David Silva, however if the Spaniard drifted too far wide this duty would be passed on to Diogo Jota and Neves would have to take over again if Silva came back inside. This was complicated further by the fact the wingers would position themselves a little higher than the two central midfielders so that they could push up and press the defenders if necessary, however they were excellently organised and rarely caught out.

As a result, City were forced wide, circulating the ball in a U-shape. Once it was played out to the wing, Wolves would shift across, staying compact so that the ball still couldn’t be played inside, either forcing City backwards or winning the ball.

Due to Kyle Walker being positioned deeper on the right, there was a bit more space down Wolves’ left as Jota could be forced up the pitch to close him down, but Wolves were still rarely caught out by this as Neves would generally be on hand to cover.

The back five also ensured that Wolves wouldn’t be left stretched. Each defender was aggressive, immediately pushing forward whenever a pass was played into a City attacker so they didn’t have the space to turn, while if anyone was caught out there was someone else close to cover them.

City’s midfielders pushing up between the lines can often leave a back four outnumbered, with the wingers hugging the touchline opening up a gap between the full-back and centre-back for them to attack, however with the back five there’s a man on hand to pick them up. Although variable to movement, Matt Doherty generally had Mendy, Ryan Bennett had Sterling, Conor Coady had Aguero, Willy Boly had David Silva and Jonny Castro had Bernardo Silva.

With Bernardo Silva and Mendy occupying the wing-backs ahead of them, David Silva and Gundogan would pull out to the touchline and try to play into the feet of Aguero and Sterling, but the cover of the Wolves midfield made it difficult to create the angle for the pass, the aggressiveness of the backline meant that even if they did manage to pull off the pass, the receiver struggled to turn, and then even if they did, someone else would just come across and cover.

With passes inside not effective, City would have to go down the outside. Bernardo Silva on the right wasn’t useful for this as, even though he would hug the touchline, he would then seek to come inside once he had received the ball. He was the first to be substituted, with Sterling replacing him on the right wing, although he still struggled to see much of the ball. Mendy on the opposite flank was more useful, but rarely got enough space to pick out an adequate cross for Aguero and the multiple Wolves centre-backs were often able to cut them out.

Leroy Sane might have been more useful, as his superior technique would make him more likely to be able to go past his wing-back and drive into the area, but he wasn’t brought on until the 77th minute so didn’t have enough time to get involved.

Nevertheless, City’s real issue was their inability to play through the centre. Gundogan and Walker’s wider roles rendered them largely ineffective while Fernandinho was isolated in the middle – moving one of them alongside the Brazilian may have made it easier for them to play out from the back.

As it was, Wolves could quite easily win the ball back. Their counters were generally halted with tactical fouls by City, however the passing quality of the midfielders meant they were often able to break quickly, with most passes going up to Jimenez to lay off for the wingers. Jota and Helder Costa springing forward meant the City backline was often outnumbered three against two, while Neves and the wing-backs could often join too.

City can understandably feel frustrated as they didn’t play poorly, their passing quick enough to have gotten the better of Wolves on most other days, however it’s also fair to say the home side deserved a point – they defended excellently and threatened City in a way few manage.