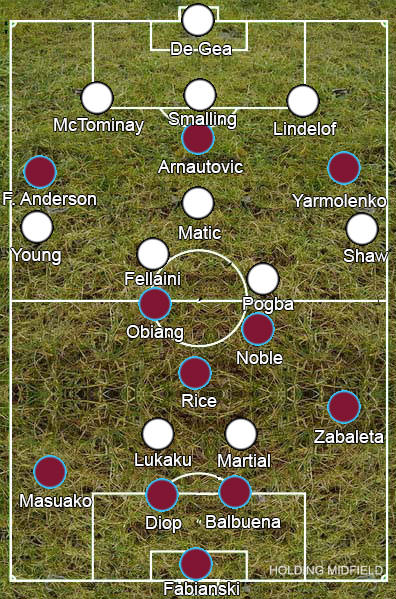 Manchester United go into this match in a bad run of form, drawing last weekend against Wolverhampton Wanderers and losing on penalties in mid-week against Championship side Derby County in the League Cup. West Ham started the season terribly but now look on the up, getting a win away to Everton, a draw against Chelsea and thrashing Macclesfield 8-0 in the League Cup.

Manuel Pellegrini opted for a 4-3-3 formation whereas Jose Mourinho went for a 3-5-2 formation like we saw against Tottenham, with Scott McTominay chosen as the natural midfielder in defence rather than Ander Herrera. Mourinho explained this decision as United needing “quality on the ball on the building up from the back and Scott McTominay has that quality with the ball”.

This decision immediately backfired though when McTominay played Pablo Zabaleta onside to set up Felipe Anderson for West Ham’s opening goal just minutes into the match. It wasn’t just McTominay’s fault though: Paul Pogba made little effort to close down Mark Noble and with little pressure on the ball, United’s defenders should have been expecting the ball played in behind but instead stood facing forward, meaning Zabaleta was already long gone by the time they had turned around, or didn’t track back, allowing Anderson to finish unopposed.

The opening goal may have come from a series of defensive mistakes very early on, but even prior to that United looked on the back foot.

This started with United’s striking duo, who pushed up close to the West Ham centre-backs, but Arthur Masuako at left-back was generally left free (occasionally Ashley Young would move all the way out of his defensive line with McTominay moving across to keep an eye on Anderson, but this was such a long distance to cover Young only did so once or twice) meaning the Frenchman could easily receive the ball and play into Declan Rice, completely bypassing United’s first line of pressure with little to no effort.

Rice and Noble would generally hold back at the base of the midfield, looking to pick out passes, while Pedro Obiang moved up between the lines and Zabaleta pushed high and wide on the right, allowing Andriy Yarmolenko to move inside, either next to Marko Arnautovic leading the line or alongside Obiang. This sometimes varied, ensuring United were kept on their toes, with Obiang dropping back and Noble moving high or Zabaleta staying back on the right, but typically West Ham had the two centre-backs deep, Masuako, Rice and Noble spread across the central channels of the pitch in fornt of them, Obiang and maybe Yarmolenko between the lines then Anderson, Arnautovic, Zabaleta and maybe Yarmolenko trying to get in behind the backline.

The ineffective defending of United’s strikers left the midfielders behind them struggling. Neither Romelu Lukaku or Anthony Martial would track back to press Rice or Noble once the ball moved past them so it was up to the midfielders to close them down. If they didn’t, the pair could either pick out a long ball in behind or a pass straight into the feet of one of the attackers. It wasn’t easy for United to press them though: Marouane Fellaini and Nemanja Matic are both quite big and immobile, making it difficult for them to cover the necessary distance to get to Rice and Noble in time, and even if they did the pair could just lump a long ball forward. Either Arnautovic could win it and lay it off to Obiang or Yarmolenko behind him, outnumbering the midfielders because Matic or Fellaini or both have pushed forward, or the centre-backs would win it and Obiang and Yarmolenko would win the second ball because again one or both of the United midfielders had pushed up to press.

Unlike Masuako on the left, Noble or Zabaleta would be closed down on the right by Pogba, but United dropping off to stop West Ham from getting in behind them meant he was having to start these runs from too deep, so he was rarely able to get close to Noble or Zabaleta quick enough to make it difficult for them to play forward.

Put simply, United’s midfielders were having to cover too much space between them, and West Ham were positioned well to stretch them. The home side also started at a high tempo, making it even harder for the United midfield to get near them, while the individual players were frequently better than their direct opponents: the midfielders could burst past the immobile Matic and Fellaini, Zabaleta and Yarmolenko were dragging around Luke Shaw and Victor Lindelof to make space for one another, Arnautovic was holding up the ball well, meaning those around him were able to control the ball easily in the final third, and Anderson could dribble past Young.

West Ham were finding it easier. For the most part, West Ham dropped off to defend in a mid-block, allowing the United centre-backs to have the ball. Noble and Obiang would stick quite close to Pogba and Fellaini respectively, but if Pogba moved too high up between the lines Noble would pass him on to Rice and instead move up to combat Matic, while the wingers kept quite narrow, often deeper than Noble and Obiang, trying to cut off any gaps through the middle.

When not having to keep an eye on Pogba, Rice’s job was mainly to cover behind the other two central midfielders and cut off the passes into the feet of Lukaku and Martial. This meant there frequently was the option of a pass into Lukaku and Martial’s feet when Rice was distracted by Pogba, but Fellaini and Matic were rarely quick enough to utilise it. Martial would drop deep into the midfield to get on the ball and play it into Pogba himself, but that left just Pogba and Lukaku in attack – easy for West Ham’s defence to deal with.

Instead, United attacked down the wings, mainly on the right as Anderson didn’t track Young back far, so the England full-back was able to whip in crosses. United did threaten from these, with Pogba, Martial and Lukaku all dangers in the box, but they weren’t exactly golden chances.

West Ham got a fortunate second shortly before half-time. A corner wasn’t cleared, falling to Yarmolenko, and Matic did a good job of standing him up, barely giving him any sight of goal. Yarmolenko shot and the ball rebounded off Lindelof, looping over the wrong-footed David de Gea.

United started the second half better, although little had changed strategically. They simply moved the ball faster out to Shaw and Young high on the wings, Martial would make diagonal runs to try and drag defenders away, Pogba stayed further back to get on the ball and Fellaini got into more attacking positions. West Ham dropping off to defend their lead helped too.

Ten minutes later, Mourinho switched to a 4-3-3, with Marcus Rashford replacing Victor Lindelof. Rashford and Martial were now on the wings and United were able to put West Ham on the back foot quickly.

Fellaini would push forward into a position between the lines, dragging Rice across and opening up the passing lane into Lukaku. Unlike Matic and Fellaini in the first half, Pogba was able to put it straight into Lukaku’s feet quickly for him to lay it off to Rashford. This wasn’t always perfect, as Lukaku’s poor first touch allowed West Ham to recover more than once, but Rashford was a better option out wide than Young: his crossing was good enough to find the very easy target of Fellaini and he was given more space to do so, as his pace meant Masuaku had to be careful not to let him sprint in behind. Playing with wingers also meant United were able to double up in wide areas with the full-backs joining the attack, making it even easier to work the ball into the box.

Rashford pulled one back for United with a superb finish – simply bursting away from Noble towards the front post to flick in with his heel – just as Mourinho made his last substitutions, bringing off Pogba and Martial for Fred and Juan Mata. These changes occured just as West Ham were starting to get more of a foot in the game – they were pressing more in United’s half, making it harder for United to pass into the forwards, while keeping the ball more, frustrating United and forcing them to drop off.

West Ham restored their two goal lead minutes later with a simple goal. Rashford lost out trying to control a clearance, with the loose ball falling to Noble – no one closed him down, giving him the time to pass in behind for Arnautovic to pick out a corner with little resistance.

West Ham were able to see out the game easily from then on. Keeping hold of the ball more meant United’s full-backs were having to drop back to defend, rather than staying high and wide in West Ham’s half, while, under some pressure, neither Fred or Matic were able to find the frontmen with the kind of consistency Pogba had, rendering Mata anonymous. This left only Rashford as a constant option attacking in wide areas, and he was now on the left, easier to deal with for West Ham cutting inside onto his right foot.