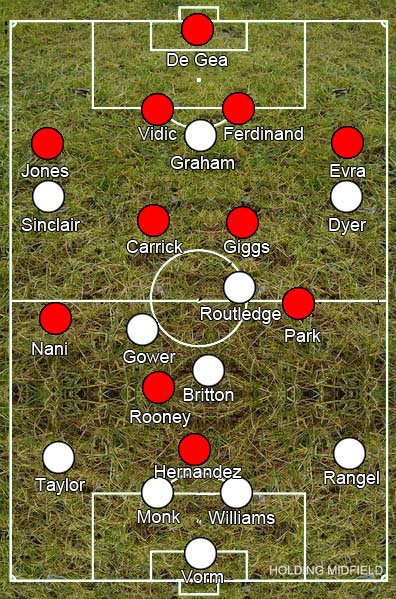 In theory Manchester United’s trip to South Wales should be a fairly uninteresting affair: a newly promoted team shouldn’t pose much of a problem for the champions. However, some unusual personnel choices from Sir Alex Ferguson, combined with Swansea’s decent start to the season bumped the interest up a notch.

After their dismantling at the hands of Barcelona in last season’s Champions League final, United have changed to a much more direct game, focussing on the quick movements of their front four. For the Swansea game though, their line-up seemed to lend itself to a more patient style – Michael Carrick was brought into the midfield for his first start of the Premier League season, partnering the aging Ryan Giggs, while Ji-Sung Park came in wide left. It was still 4-4-2 but with Wayne Rooney dropping deep into the midfield so often this season, it could just as easily be a five man midfield.

This could be a reaction to Swansea’s notably patient play – Brendan Rodgers’ side setting up in their usual 4-3-3 shape. Although the Barca-lite style posed a few problems for United early on, Swansea probably having the better of the opening ten minutes, it was also the reason they threw their momentum away. It’s unlikely that a Stoke player, for instance, would look to play the ball short like Angel Rangel did to gift Ryan Giggs the chance to set up Javier Hernandez for the opening goal rather than clear the ball away from the dangerous area.

It was a shame that Swansea wasted their even keel so easily, as they caused United a number of problems. Without the ball, they looked to drop deep and compressed the space in and around their defence well, making it difficult for the patient United to play their way through. The impressive running of wingers Scott Sinclair and Nathan Dyer when they got the ball also caused some defensive problems for United. The issue for Swansea came that these things didn’t really match up brilliantly together: while Sinclair and Dyer’s dribbles were impressive, the deep positioning of Swansea meant they mostly had too far to run, as did Wayne Routledge and Mark Gower to support Danny Graham from midfield, often leaving the big striker isolated. To remedy this, they looked to press higher up the pitch in the second half, with Routledge replaced by the more defensively sound Joe Allen.

Thanks to Rangel’s mistake, we can’t really judge the effectiveness of United’s change of emphasis: they never broke down Swansea but then they didn’t need to. The greatest lesson to be learned from the game is the importance of concentration – better feet from Rangel or Sinclair and we would have had a totally different game on our hands. Instead, what we got was an unimpressive but nonetheless routine win for United.